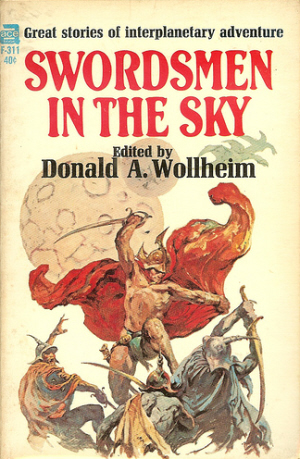 That earlier volume was titled Swordsmen in the Sky, and it was edited by Donald A. Wollheim.  Swordsmen was published by Ace Books in 1964.

Whereas Swords & Dark Magic is subtitled “The New Sword and Sorcery,” the cover of  Swordsmen in the Sky promised “Great Stories of Interplanetary Adventure.”  That’s somewhat misleading, for two of the five yarns in Swordsmen take place on our own planet, though not exactly the Earth we know.

Another difference between the two books is that Swordsmen reprinted stories first published during the 1930s, ’40s, and ’50s, while Swords & Dark Magic showcases brand-new work.

Even so, its publication was something of a harbinger of the sword-and-sorcery boom that was only a few years away from beginning.

The cover, by the recently departed Frank Frazetta, could easily have adorned a Conan, Thongor, or Brak novel.  The crimson cape swirling around the sword-swinging central figure anticipated the similar garment that shrouded the man-ape Thak on Frazetta’s iconic Conan cover.  As well, the battling men’s unusual-looking helmets, and the moons and dragons in the background,  provide a hint of the exotic narratives within the book.

Two of the stories Wollheim selected — Poul Anderson’s “Swordsmen of Lost Terra” and Leigh Brackett’s “The Moon that Vanished — are classics in the sense that they continue to fascinate with each re-reading, even though they were first published in 1951 and 1948, respectively.  Anderson’s story is set in a far-future Earth that no longer spins on its axis, with Celtic culture surviving that catastrophe.  Were it not for the scientific explanation for the seemingly magical power of the lead character’s bagpipes, “Swordsmen of Lost Terra” would qualify as sword-and-sorcery.  I’m guessing that Celtophile Robert E. Howard would have loved this tale.

“The Moon that Vanished” is set on Brackett’s version of Venus, which was probably the best of all the fictional imaginings of that planet before space probes revealed the lifeless and hellish face hidden beneath its clouds.  This story of a quest not for gold but godhead has proven more than equal to the test of time.  Take away its interplanetary aspects and this story, too, is pure fantasy, if not sword-and-sorcery.

“People of the Crater,” by Andre Norton, takes place in one of those remote corners of our planet that will never show up on Google Earth.  The titular crater is located in an unknown, mist-shrouded region of Antarctica, filled with strange creatures, sleeping gods, and magical science.  The story is a slight cut below the Brackett and Anderson entries, but a large cut above most tales of its type.

“Kaldar, World of Antares” is a rip-roaring interstellar thriller by Edmond Hamilton, with forerunners to the Star Trek matter transporter and the Star Wars light-saber.  The action is headlong, but the plot relies too much on howling coincidences — the hero, who is transported from Earth to Kaldar, lands exactly where the savior of the planet is prophesied to appear ….

And then there’s “A Vision of Venus,” by that master of interplanetary adventure Otis Adelbert Kline.  In comparison with the other stories in Swordsmen, this one is a squib — almost a “Cliff’s Notes” condensation of the genre.  If Wollheim wanted Kline to be represented in this volume, he could have picked a more substantial piece than this one.

I was 18 years old when I first spotted Swordsmen in the Sky at the local train station’s book-rack during the year the anthology was published.  The forty cents needed to purchase a copy jingled in my jeans.  My sense of wonder was primed for fulfillment.

Little did I know that the little paperback I carried out of that station would be a precursor not only to many other books I would subsequently read, but the ones I would write as well.

Wonderful! I bought Swordsmen in the Sky in a used bookstore in Ottawa 30 years ago (a decade after it was published), and was instantly thrilled.

It was the book that taught me that science fantasy was a separate genre from sword & sorcery — and from SF — with its own history, conventions, and masters. I still consider it the defining sword & planet anthology.

Cannot believe I missed that! Even saw the Fraz cover too on galleries. I’ll have to dig for it.

I too have missed this title – thanks for giving me another one to find. I look forward to reading several of those tales.

[…] Writer, by Howard Andrew Jones Masterpiece: The Sword of Rhiannon by Leigh Brackett by Ryan Harvey Swordsmen in the Sky by Charles Saunders A Bout of Aboutness: Urban Fantasy and Sword-and-Planet by James Enge An […]