Swordsmen in the Sky (Ace, 1964). Cover by Frank Frazetta

I’ve been on something of a Don Wollheim kick recently. I looked at his 1989 Annual World’s Best SF two weeks ago, and last week I explored a collection of 30 DAW paperbacks he published in the 70s, including two rare Imaro volumes by Charles Saunders.

We’ve examined a few of Wollheim’s older anthologies in the past, but I couldn’t recall writing about one of my personal favorites, Swordsmen in the Sky, his hugely influential 1964 collection of science fantasy tales by Poul Anderson, Andre Norton, Leigh Brackett, Edmond Hamilton, and others. I scanned the cover, drafted a quick piece, and checked for previous references to it — and that’s when I discovered a delightful review by none other than Charles Saunders himself, published right here at Black Gate, in the very early days of the BG blog. Here’s a taste.

Two of the stories Wollheim selected — Poul Anderson’s “Swordsmen of Lost Terra” and Leigh Brackett’s “The Moon that Vanished — are classics in the sense that they continue to fascinate with each re-reading, even though they were first published in 1951 and 1948, respectively. Anderson’s story is set in a far-future Earth that no longer spins on its axis, with Celtic culture surviving that catastrophe. Were it not for the scientific explanation for the seemingly magical power of the lead character’s bagpipes, “Swordsmen of Lost Terra” would qualify as sword-and-sorcery…

“The Moon that Vanished” is set on Brackett’s version of Venus, which was probably the best of all the fictional imaginings of that planet before space probes revealed the lifeless and hellish face hidden beneath its clouds. This story of a quest not for gold but godhead has proven more than equal to the test of time. Take away its interplanetary aspects and this story, too, is pure fantasy, if not sword-and-sorcery.

“People of the Crater,” by Andre Norton, takes place in one of those remote corners of our planet that will never show up on Google Earth. The titular crater is located in an unknown, mist-shrouded region of Antarctica, filled with strange creatures, sleeping gods, and magical science….

I was 18 years old when I first spotted Swordsmen in the Sky at the local train station’s book-rack during the year the anthology was published. The forty cents needed to purchase a copy jingled in my jeans. My sense of wonder was primed for fulfillment. Little did I know that the little paperback I carried out of that station would be a precursor not only to many other books I would subsequently read, but the ones I would write as well.

I have to tell you, it was a wonderful surprise to stumble on a forgotten BG contribution from Saunders, so recently after celebrating his work here. Read the while thing right here.

Here’s a look at the inside cover and the page facing the Table of Contents for Swordsmen in the Sky.

Inside cover and facing page for Swordsmen in the Sky

Those of you with long memories will recall our looks at Wollheim’s classic SF volume Tales of Outer Space (Ace, 1954) and the seminal horror collection The Macabre Reader (Ace, 1959).

But Swordsmen in the Sky looms large for SF and fantasy fans of the 60s and 70s. It was the first true science fantasy anthology in the sprit of Edgar Rice Burroughs, and contained a Venus novelette by Leigh Brackett, a Kaldar novelette by Edmond Hamilton, a tale in Andre Norton’s Garan sequence — and a glorious Frazetta original on the cover.

Swordsmen in the Sky was published by Ace Books in 1964. It is 192 pages, priced at 60 cents. It has never been reprinted, and there is no digital edition. It has been out of print for 57 years.

I have a copy on the bookshelf by my bed. I bought it at the thrift store around the corner from my middle school, almost fifty years ago. I was smart even when I was twelve years old!

I got a copy of this from Sherry Gottlieb at “A Change of Hobbit” in 1974 for 65¢. My copy has a different number on it: F-311. I have a bookmark in it halfway through the book, but it’s been so long that I don’t remember either story I’d read. It’s now in my TBR stack!

> I bought it at the thrift store around the corner from my middle school, almost fifty years ago.

You were well ahead of me. I didn’t find a copy until I was almost 30!

According to ISFDB, SWORDSMEN IN THE SKY was originally released in 1964 with Ace catalog number F-331 and a 40 cent price tag. 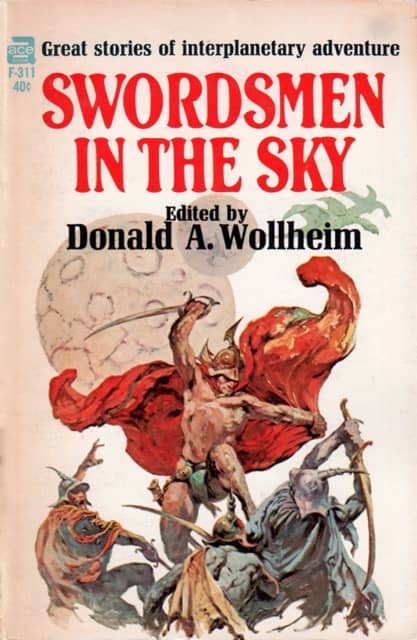 Sometime later it was reissued with a new number and a 60-cent price. That’s the copy I own. Sounds like you have a first printing!

You remember the Hobbit, Smitty? We probably brushed elbows there sometime without knowing it!

Thomas, I’m an Ohio guy, and from ’71-’75 I had a factory job that paid me generous amounts of money, quite a lot of which went by mail to California and “ACOH.” But I did meet Sherry, as well as two of her long-time customers, David Gordon and a guy named John (last name Scharles?) from Oxnard, at Discon II in 1974. I’ve got about 20-odd years’ worth of old “Astounding” mags — 1947 to late ’60s — I ordered from Sherry (or is it Sherri?). She was instrumental in my obtaining literally hundreds of old SF/F paperbacks and hardcovers, almost all of which I still have. When I lost that factory job in ’75, I had to stop my mail-ordered books, and it wasn’t until dozens of years later that I discovered she was no longer running the place.

Smitty, I was a Change of Hobbit regular from about 1975 to 1982, when I went into the army, following the store from its original location in Westwood to two subsequent locations in (I think) Santa Monica. When I got out of the army in 85 one of my first priorities was to visit the Hobbit…but it had gone out of business.

What I wouldn’t give to walk through those doors one last time!

Not sure where I got my copy, but wherever it was, they had the irritating habit of blacking out the original price in magic marker. Still a great collection, though.

Remember purchasing this collection around 1968 in a Drug Fair in Culmore, VA. I was a big fan of Andre Norton and bought it solely because of that. But it introduced me to Anderson, Hamilton, and Brackett. Anderson in particular became one of my favorite authors. Probably have 80 of his books on my shelves. This volume was a real gateway drug !

I’m not quite as vintage as some of you, but I picked up my first copy of this sometime in the early 80s. It’s one of those books I grab every time I come across a copy of it.