Throughout the decades, game company Avalon Hill has been associated with tabletop war gaming, and this was especially true in the 1970s and 1980s. However, the company has been known to dip into other types of games, mainly board games of one stripe or another and sometimes even tabletop role-playing games.

One of Avalon Hill’s earliest tabletop RPGs was Lords of Creation, published in 1983 and written by Tom Moldvay, known for his earlier work on Dungeons & Dragons.

Lords of Creation is very much a game of its time, but in many way it’s also a game ahead of its time. The D&D influence is obvious in the mechanics, especially concerning character and monster stats, but this game was one of the earliest to stretch beyond the boundaries of any single genre. Lords of Creation wasn’t just a fantasy tabletop RPG, but was meant to be a game for all genres, including science fiction, mythology, noir, and more. In fact, the back of the game box reads, “The ultimate role-playing game… a game of science, fantasy, science fiction and high adventure that explores the farthest reaches of your imagination! Splendid adventures take place throughout time, space and other dimensions.”

I didn’t get many chances back in the day to play Lords of Creation, probably because it wasn’t the most popular game around even if it has something of a collector’s following nowadays. Still, the few times I played the game, it was a blast, in no small part because of Moldvay’s ingenuity in making Lords of Creation something unique, at least for the time period of its original publication.

The box itself for the game is somewhat large for a tabletop RPG, though was typical for the Avalon Hill war games of the time. Upon opening the box, one finds a 64-page rule book, a 64-page The Book of Foes (you D&D players will recognize this as similar to a Monster Manual), a Game Catalog of everything Avalon Hill had to offer at the time, and three dice, a D20, a D10, and a D6, everything you need to play the game.

Diving into the rules book and character generation, here is where the first D&D influence rears its head. Character ability scores are the following: Muscle, Speed, Stamina, Mental, and Luck. Then there’s the experience chart, here based upon Personal Force, a numerical value that with growth increases the character’s powers and abilities, not unlike character levels in D&D and other RPGs. At each level of Personal Force, characters automatically gain a set new special ability, starting off with Dimensional Sight and leading to other abilities such as Dimensional Projection and Double Healing.

Skills are also available to characters and include everything from Medical to Master Criminal to Stage Magician and various weapons and much more. Altogether there are more than 100 non-combat skills and 53 combat skills. Under each category heading for a particular skill there are five levels and each level provides more specialized abilities. For instance, the Building skill offers Carpentry, Metal Working, Electrical, Miniaturization, and Futuristic/Magical. Gaining levels in a skill opens up new capabilities for a character, obviously with a maximum of five levels.

Eventually characters can also learn Powers, which come in three varieties: Magical, Psychic, and Futuristic. From there, just like the skills, the powers are broken down into category headings and each category has five levels, each level offering another power. For example, one Power comes with the heading of Wizard (Magical) and has the following abilities: Animal Control, Necromancy, Fly, Curse, Storm. As a character gains levels with a Power, the more abilities they gain, again topping out at five levels.

Jumping over to The Book of Foes, game masters will find a plethora of beasties for campaigns of all types. From Abiku to Zombies, there are plenty of monsters of all stripes, including elemental creatures, gods, dragons, robots, and much more. As for the stat blocks for each of the foes, players of old-school D&D will see some similarities to ye olde Monster Manual; stats include Attack, Damage, Initiative, Armor, Life Points, Movement, Luck, the number of the foe likely to be together, and the Experience Point value for an individual foe, with foes who have special abilities also having a Power score. Each foe also includes a brief description and a fine piece of black and white art from artist Dave Billman, many of these drawings looking like similar works from AD&D and D&D.

Mechanically Lords of Creation might not have been all that different from other games of its era, but its scope of play was definitely uncommon for the times. Also, the game was simply fun. There was an element of the non-serious to Lords of Creation though not of out-and-out silliness, somewhat reminiscent of adventure cartoon television shows of the period such as He-Man and the Masters of the Universe and, yes, Dungeons & Dragons.

Used to own this game, though I never played it. Looking over it, I never quite understood just why exactly player characters would start to develop interdimensional and world-creating abilities. Is it ever explained in the background?

It doesn’t go into why PCs would have such powers, but it does say the powers are at the discretion of the game master.

Lords of Creation wasn’t really a campaign setting in itself, so details with explanations are left up to the game masters and the players. Some gamers will appreciate this, others not so much.

[…] OUTSIDE THE BOX. Ty Johnston revisits “Lords of Creation a tabletop RPG before its time” for Black […]

Thanks Ty.
Now for the first time I have an inkling of what the game was actually like. Until now my only knowledge has been RPG.net and if course the AH sales material. Can’t say I looked that hard mind you.

Interesting notes on Tom Moldvay, Basic D&D 2nd is whereby cut my teeth. Love to see how he took it to another level

I toyed with the idea of buying this game a few times back in the day. Also liked the concept, but with no friends really keen I couldn’t justify (still can’t, man this game has become expensive!) The cost. Always liked the one modules name “The Horn of Roland”.

Never quite thought of classic RPG this way: recruit, train, level up, send forth to recruit more – but it is that in a kind if multi level marketing way. (Hope that came across as I intended).

Another AH game I have been wanting to hear more in is Powers & Perils. Tales from the Floating Vagabond I recently acquired a bit if a windfall copy of the core rulebook in great shape. I wonder if they did any other RPG’s bar if course RuneQuest III which is well documented.

Thanks for this flashback, Ty! I loved the old Avalon Hill bookcase games design, but more so, basic box sets (so this scratched both those itches). This did not disappoint, though there was a whole lot of extra room in that thick box. The whole layout is breezy and very easy on the eyes. Heck, they even had color header text.

The artwork and whole game vibe reflected the “anything goes” vibe of the game. The monster illustrations are simply awesome.

I also have the three modules, Horn of Roland, Omegakron, and The Yeti Sanction.
I think I ran the game like a half dozen times. Definitely something to get back to the table with!

And I think totally had that lemon d10 die and lime d20, too… lol

Wow Ty! I haven’t thought about Lords of Creation in decades. There was a lot of excitement when Avalon Hill finally jumped into the RPG market — this cover of Steve Jackon’s Fantasy Gamer magazine in 1984 still sticks in my mind. 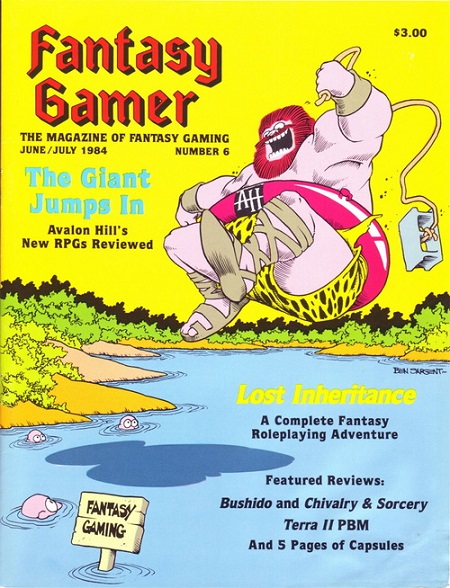 There was a lot of attention on the games, and some big expectations. But as you note, it wasn’t the most popular. Perhaps expectations were too high, but Lords of Creation and AH’s other big RPG, Powers and Perils, were both considered expensive failures. Maybe it was those high expectations that killed them.

I think there were a lot of reasons Lords of Creation didn’t take off. For one, it might have been a bit too unusual for its time. And honestly, I think the bookcase design might have worked against it because at that time gamers were “trained” to see such large boxes as war games and not rpgs, especially when compared to the slimmer box sets of the day from TSR (ie. World of Greyhawk, Star Frontiers, Forgotten Realms, etc.).

And I’ve always wondered if the video game crash of ’83 didn’t also have some effects, both good and bad, upon the tabletop market at that time. Not sure this would have hurt Lords of Creation, but possibly there’s a relation.