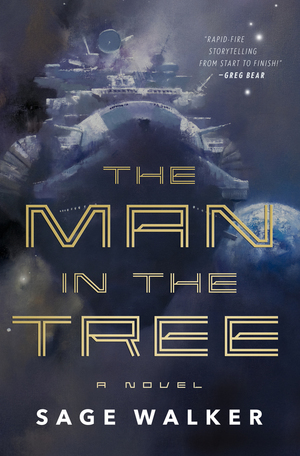 Here’s one that slipped under my radar when it was originally published by Tor in September. It’s the second novel from Sage Walker. Her first, Whiteout (1996) won the Locus Award for Best First Novel. Gary Wolfe reviews her sophomore effort at Locus:

The Man in the Tree is a generation starship tale… but Walker makes a couple of interesting choices that set The Man in the Tree apart. In the first place, Kybele is still in the decades-long preparatory phase before leaving orbit, with contract workers arriving and departing, and the culling of the population – to determine who will be allowed to remain among the 30,000 on the actual voyage – is an ongoing source of tension. In the second place, Walker’s plot is that of a police procedural murder mystery. One of those contract workers, Cash Ryan, is found impaled on a tree, having either jumped or been thrown from a nearby high-rise tower.

Humanity’s last hope of survival lies in space…but will we even get there?

Helt Borresen is an Incident Analyst. What that means is that aboard the seed ship Kybele, he is the closest thing that the organization has to a security officer. But he doesn’t think that it’ll be a big part of his job, as all the candidates have been carefully screened.

Why the need for a seed ship? Because our planet is toast and the colonists that leave our world are the best shot that we have for our species to continue.

Everything is set… and then someone is found hanging dead just weeks before the launch. Fear and paranoia spread as the death begins to look more and more like a murder. The authorities want the case settled quickly and quietly so as not to cause panic.

And Helt is the one to prevent a murderer from sabotaging the entire mission.