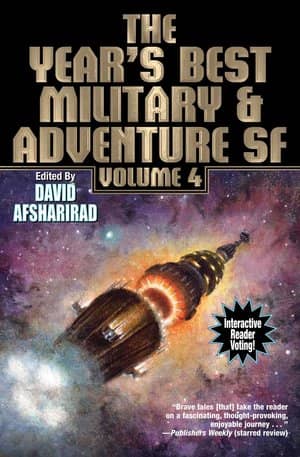 One of the things I’ve appreciated about David Afsharirad’s Best Military and Adventure SF, now in its fourth year, is that he seeks out the kind of fiction that routinely gets overlooked by the editors of the other Year’s Best SF books. The newest volume, coming in trade paperback next week from Baen, is no exception. Check out the table of contents.

To see what I mean, you can compare Afsharirad’s selections versus other Year’s Best volumes coming out this year. Here’s a list with Tables of Contents for the other major 2018 volumes from Rich Horton, Gardner Dozois, Jonathan Strahan, Neil Clarke, John Joseph Adams, Paula Guran, Jane Yolen, and Michael Kelly.

We’ve covered all three previous volumes in the Best Military and Adventure SF series. All were published by Baen, and edited by David Afsharirad.

The Year’s Best Military and Adventure SF, Volume 4 was edited by David Afsharirad and will be published by Baen on June 5, 2018. It is 352 pages, priced at $16 in trade paperback and $8.99 for the digital edition. The cover artist is uncredited. See complete details, including sample chapters, at the Baen website.

See all our coverage of the best upcoming fantasy and SF here.