Ellison has received 8 Hugo Awards, beginning with his short story “’Repent Harlequin!’ Said the Ticktockman.” His other Hugo Award winners include the short stories “I Have No Mouth, and I Must Scream,” “The Beast that Shouted Love at the Heart of the World,” “The Deathbird,” “Adrift Just Off the Islets of Langerhans: Latitude 38° 54′ N, Longitude 77° 00′ 13″ W,” “Jeffty is Five,” and “Paladin of the Lost Hour.” His screenplay for the Star Trek episode “City on the Edge of Forever” also earned him a Hugo. Ellison has also won four Nebula Awards for his stories “’Repent Harlequin!’ Said the Ticktockman,” “A Boy and His Dog,” “Jeffty is Five,” and “How Interesting: A Tiny Man.” SFWA has also given him the Bradbury Award for 2000x, in collaboration with Yuri Rasovsky and Warren Dewey. He has also won the World Fantasy Award, Bram Stoker Award (5 times), British Fantasy Award, British SF Association Award, the Jupiter Award (twice), the Prometheus Hall of Fame Award, and has three Worldcon Special Convention Awards.

“Pennies, Off a Dead Man’s Eyes” was originally purchased by Ejler Jakobsson and published in the November 1969 issue of Galaxy Magazine. It was reprinted the next month in the British edition of the magazine, and in 1970 Ellison included it in his collection Over the Edge: Stories from Somewhere Else. Ellison also included it in his 1971 collection Alone Against Tomorrow and that same year, Norman Spinrad reprinted it in The New Tomorrows. It was selected for The Best of Galaxy, Volume I in 1972. In 1974, Ellison included it in The Time of the Eye. When Over the Edge was included in the omnibus Edgeworks 1: Over the Edge / An Edge in My Voice, the first volume of Ellison’s work reprinted by White Wolf in the 1990s, it was included. An audio version of the story appears on the collection Midnight in the Sunken Cathedral, first issued in 2001 by Fantastic Audio. The story was translated into French in 1971, Italian in 1976, and German in 1980. 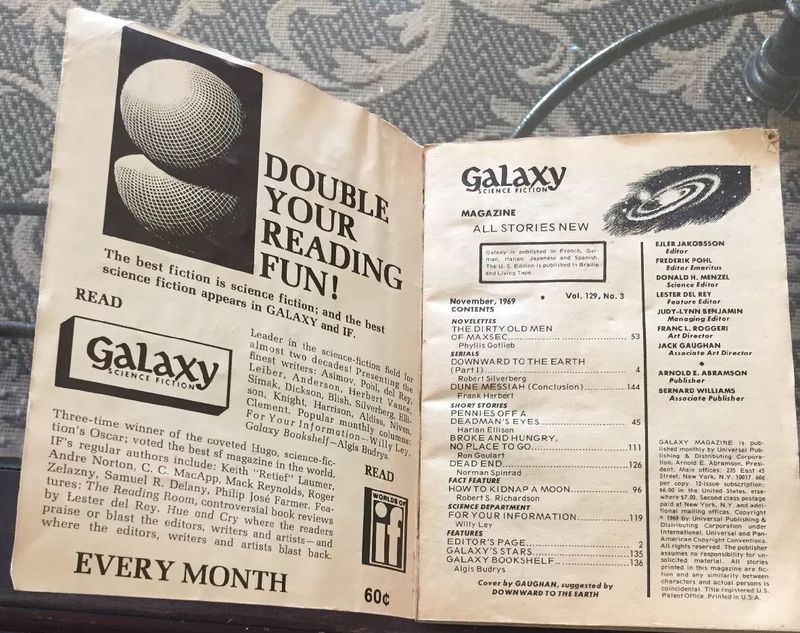 Ellison’s story looks at the death of Jedediah Parkman, an 82 year old black man who helped people he came into contact with. Once of the people he helped returned for the funeral, keeping his distance so none of the other mourners could see him and making use of the ability to disappear under certain circumstances to help him maintain his anonymity. After the funeral, but before he could pay his respects to Parkman, he watches a white woman in mourning clothing remove the coins from Parkman’s eyes and leave.

Following her to Kansas City, he confronts her to find out why she would steal the coins off Parkman’s eyes, thus consigning his soul to Hell. He learns that the charity someone shows to people isn’t always universal and in some cases is used to atone for hidden sins.

Reprint reviewed in the collection Edgeworks 1: Over the Edge/An Edge in My Voice, by Harlan Ellison, White Wolf 1996.

Hey! I’m woikin’ this side of the street!

Adrian — it’s tradition for people who review the same 50-year old magazine to challenge each other to a death match.

Also… when I went hunting for a bigger image, Google told me the biggest image on the internet was from your article! So I stole it. I think that means you get to choose the weapon.

What’s up with Steven’s Birthday Review selection today? Sometimes he tries to throw us a curveball by featuring somebody obscure, but today he outdoes himself. I mean, can anyone name a single significant novel by today’s honoree? 🙂

Spider Kiss. And hands off – I’m doing that one one of these days!