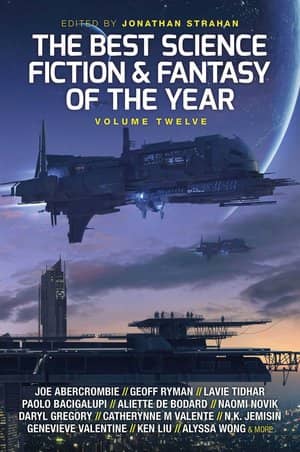 I recently discovered the Coode Street Podcast, hosted by editor Jonathan Strahan and Chicago Tribune critic Gary K. Wolfe, and have been thoroughly enjoying it. They discuss a wide variety of topics of interest to SF and fantasy readers every week — everything from the Hugo nominations, the best debuts of the year, art in science fiction, Ursula K. Le Guin, conventions, upcoming releases, and so much more — and they’re both so articulate and knowledgeable, and so darn enthusiastic, that you can’t help coming away from each hour-long conversation with a lengthy list of brand new books you just have to check out.

I feel the same way about Jonathan Strahan’s annual Best Science Fiction of the Year. The latest volume makes it an even dozen, and each one has helped me discover a handful of delightful new authors. It’s a book I cherish every year, and this one — with stories by Samuel R. Delany, Yoon Ha Lee, Caroline M. Yoachim, Rich Larson, Indrapramit Das, Charlie Jane Anders, Linda Nagata, Theodora Goss, Greg Egan, Mary Robinette Kowal, Scott Lynch, Maureen McHugh, Alastair Reynolds, Karl Schroeder, Kai Ashante Wilson, and our very own C.S.E. Cooney — looks even more stellar than most.

It arrives in trade paperback from Solaris next week. Here’s the Table of Contents. 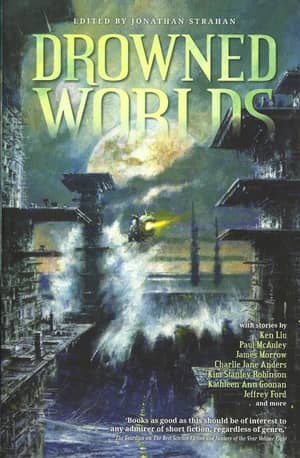 I’ve lost count of just how many of Jonathan’s books we’ve covered here at Black Gate. In addition to his Best Science Fiction and Fantasy of the Year, he’s also the mastermind behind the highly acclaimed Infinity anthology series (Infinity Wars, Meeting Infinity, etc.) as well as the occasional standalone tome such as Drowned Worlds. With Terry Dowling he edited the fabulous five-volume Early Jack Vance collections for Subterranean, and all on his own he produced four Best Short Novels books for the Science Fiction Book Club.

See all of our coverage of Jonathan’s books here.

This is one of ten major Year’s Best volumes we’ve covered in 2018. The others include:

The Best Science Fiction and Fantasy of the Year, Volume Twelve will be published by Solaris Books on April 17, 2018. It is 620 pages, priced at $19.99 in trade paperback and $7.99 for the digital edition. The cover is by Adam Tredowski.

You “recently discovered” the Coode Street Podcast?! I’m sort of shocked. You always strike me John as sort of “on top” of trends within sci-fi/fantasy. I’ve been listening to Coode Street for years now.

Wish you’d told me about it, James! 🙂

Seriously, I’ve known about Coode Street for a while, but I just wasn’t much of a podcast guy. I guess it’s more accurate to say that, thanks to the two hours I spend on the train every day, I’m finally getting into podcasts, and Coode Street helped me get there.