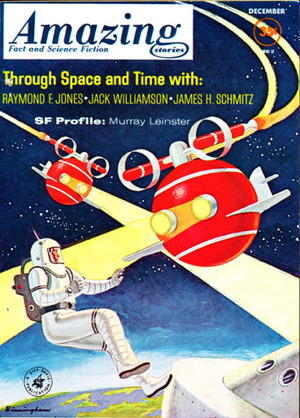 Another issue from fairly early in Cele Goldsmith’s tenure. The cover is by Lloyd Birmingham, his first of a fair quantity of covers for Amazing, Fantastic, and also Analog through 1964. Interiors are by Virgil Finlay, Dan Adkins, and (as a reprint from 1930) Leo Morey.

S. E. Cotts’ book review column, the Spectroscope, begins with a look at one of the most famous of SF novels, Robert A. Heinlein’s Stranger in a Strange Land. She disliked it — “408 pages of pretentious balderdash.” (I confess I tend to agree.) She also reviews Heinlein’s collection 6XH, which she likes a great deal, especially “The Man Who Traveled in Elephants.” She also covers Clifford Simak’s Time is the Simplest Thing, which was one of the first adult SF novels I read, and which I remember fondly if dimly. (Cotts gives it a thumbs-down.) Also: more thumbs down for Manly Wade Wellman’s Islands in the Sky; a highly qualified approval for Curt Siodmak’s Skyport, and general if mild appreciation of a satirical book I haven’t heard of: Take Me to Your Leader, by Louise and Leslie Waller.

Sam Moskowitz’ historical article is about “Murray Leinster” (real name Will F. Jenkins), quickly summarizing his career from his first published work at the age of 13 to well-respected mid-50s work such as the Hugo-winning “Exploration Team.” He emphasizes Leinster’s range, and his ability to transition from the early crude SF to mature later work.

Lots of letters this month: from Moiya Virginia Norton (criticizing the logic in a recent Stanley Lee story), Ron Smith (praise for the controversial David R. Bunch), Robert E. Briney (sensibly complaining about Moskowitz conflating a character named Conan in the Bradbury/Brackett story “Lorelei of the Red Mist” with Howard’s Conan), H. Conard and Richard Bartlett (taking opposite sides regard to an earlier editorial), E. E. Evers (with a poem), Bob Adolfsen, Charles D. Cunningham (complaining about Moskowitz’ “inept” profile of Van Vogt), followed by a note from Van Vogt himself praising the profile, David B. Williams, Robert Thrun, and Joseph Billings.

Several of these are fairly well-known fans of the day, the most interesting perhaps being Evers, who left fandom – and his entire previously established identity – after he came to the rescue of a woman who was being attacked by another man. Evers beat the guy up, only to learn he was an off-duty cop, and that the police department weren’t going to give up going after him. So he disappeared, and people tend to think he took a new identity.

Finally, the editorial rather bemusedly looks at the general public’s reaction to a spoof article in another Ziff-Davis magazine, Car and Driver. The article was called “Technical Report: Moss Mark III,” by Brock Yates and Gordon Bruce, and purported to reveal that the famous English race car driver Stirling Moss was a robot. Apparently, many readers thought the article was serious. The whole article is reproduced in this issue of Amazing.

I’ll begin with McClatchie, surely the “Little Known Writer” this issue. I can only find two stories by him — this one, and a novel, “The Last Vial,” that was serialized from November 1960 through January 1961 in Amazing. Project Gutenberg suggests he may have been born in 1915. “Mother America” itself is trivial but amusing enough in its old-fashioned way. There is a project to create a perfect specimen of American manhood: Boy America, in response to some Russian efforts. A team of geneticists is tasked to find the perfect mother and perfect genetic match, and the mother will be artificially inseminated. For marketing reasons, a popular actress is presented as one mother candidate … and then she and the head of the scientific project hit it off. No real surprise what happens.

Williamson’s story is a reprint from the November 1930 issue of Amazing. It’s set in a Utopian future, and it concerns a writing “power couple”: Eric Stokes-Harding, who writes bestselling novels about the adventures people had back in the 20th Century, and his wife Nadia, who writes poetry about the joys of nature. Both are dissatisfied with their current life, which is too easy and citified, and so they jump at the chance to bribe a friend who has invented a matter transmission system to send them to rugged Venus, where they will experience a true back to nature existence. Again, easy to figure out how much they’ll enjoy that.

Schmitz’s “The Star Hyacinths” is a part of his main sequence of stories, about a future Galactic civilization called the Hub. In Eric Flint’s set of books collecting his complete works for Baen, it was included in the volume called Telzey Amberdon for convenience’ sake: it does not feature Telzey, but one of the main characters, Wellan Dasinger, appears in some of the Telzey stories. This is fairly minor work (perhaps that’s why it appeared in Amazing and not Analog, which was by this time Schmitz’ primary market). Six years prior to the main action, Dosey Asteroids were robbed of a shipment of extremely valuable Star Hyacinths. Wellan Dasinger is on a mission with a certain Dr. Egavine — who turns out to be a criminal. As do the the crew of the ship they are taking, except for the attractive and competent pilot, Miss Duomart Mines. No surprise — they’re looking for the missing Star Hyacinths. And as it happens, so is Wellan, in his role as insurance investigator. They have to negotiate hypno sprays and a machine that broadcasts fear, as well as a survivor of the crash of the spaceship that had the stolen gems. None of it quite convinced me, either economically or as to plot. And for that matter Duomart is less fun as an heroine than either Telzey or Trigger. Schmitz was usually at least kind of fun reading — and that’s the case here — but this ranks fairly low on any list of his Hub stories.

Finally there is Raymond F. Jones’ “The Memory of Mars.” Mel Hastings is a journalist, and his wife is dying. She insists, however, that they once went on a trip to Mars. But Mel has no such memory — and he also has a desperate fear of spaceflight. But he regrets not being able to indulge her desire for a “return” trip — then, after she dies, he learns to his shock that she doesn’t seem to be human. I admit, as a regular SF reader, I immediately assumed she’d turn out to have been Martian, somehow having replaced his real wife during the trip to Mars, during which Mel would have been treated to forget. That’s not quite what’s going on, though — the resolution is far more complicated, and a bit strange, involving Mel getting treatment to deal with his space fright, which leads to him recalling his and Alice’s trip, and realizing something very odd indeed happened. I think in the end the story is overly complicated, wrapped around a familiar idea, but I did want to know what was going on all along. Not great at all, but intriguing in its way.

Rich Horton’s last Retro Review for us was the November 1962 issue of Amazing Stories. His website is Strange at Ecbatan. See all of Rich’s retro-reviews here.

Let me be the first to say “Thanks!” for this retro-review of another of Cele Goldsmith’s issues. I’m always happy to see them, and look forward to more.