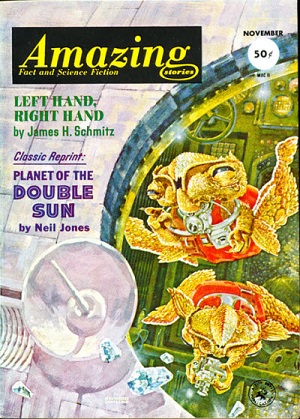 The cover to this issue is by George Schelling. Interiors are by Schelling, Virgil Finlay, Jack Gaughan, Leo Morey, and Leo Summer. The editorial is about using computers to determine national policy.

S. E. Cotts’ book review column, the Spectroscope, reviews three anthologies: The Sixth Galaxy Reader, The Best from F&SF, 11th Series, and Groff Conklin’s Worlds of When. Cotts is disappointed in the two magazine-based collections, suggesting that in neither case was there enough first rate material for a book. She is happier with Conklin’s anthology, reserving the highest praise for Fritz Leiber’s “Bullet With His Name.”

I think Cotts was pretty much correct about the Galaxy Reader, which is weak, but dead wrong about the F&SF book — in particular, she failed to note the brilliance of Avram Davidson’s “The Sources of the Nile,” one of the greatest SF stories of all time. She also reviews Robert Silverberg’s The Seed of Earth, and is fairly well pleased with it (noting that it features a cliched setup) — and I pretty much agree with her judgment there.

The science article is the fourth in Ben Bova’s series about extraterrestrial life, this time dealing with the possibility of life around fairly nearby stars. Dr. Bova recently sent me a note crediting Isaac Asimov for his chance to write this series — it seems Goldsmith had asked Isaac to do a series about extraterrestrial life, but he demurred and suggested Bova as an alternative.

The letters are from Charles Dixon (complaining about Edgar Rice Burroughs), J. J. Tilton (responding in an annoyed fashion to S. E. Cotts, who had criticized him for criticizing her for disliking Heinlein’s Stranger in a Strange Land), and Larry Shellum, also mad at Cotts, this time for a recent review of a Damon Knight anthology.

Schmitz’s “Left Hand, Right Hand” is pleasant and fairly ordinary SF, with a familiar plot. Troy Gordon is a member of an Earth expedition researching the newly discovered planet Cassa. He has recovered his barely alive compadre Jerry Goodman, a pilot, and his keeping him hidden? Why? It seems the Earth expedition has been overrun by penguin-like aliens, the Tareeg, and to his disgust the rest of the expedition, the scientists, have been cooperating with the Tareeg, after a couple of them were tortured to death. Troy wants Jerry to help him escape and return to Earth with the news — especially as the Tareegs, water creatures, are preparing to crash comets into Cassa to turn it to a water planet. But Jerry must recover first, and Troy must keep him a secret from both the Tareegs and the quisling scientists. It all culminates in a twist… and all this is nicely done, but routine.

“The Planet of the Double Sun” is this issue’s “Classic Reprint.” This was the second of Neil R. Jones’ inexplicably popular Professor Jameson series, and it appeared first in the February 1932 Amazing. The Professor, having had his corpse shot into space upon his death, has been converted into a machine by the machine men of Zor, or Zoromes, 40 million years in the future. These Zoromes roam the dying universe, exploring and gathering knowledge. The Professor is an eager participant, and in this story they visit a planet with two suns, one blue and one orange (perhaps we should call it the Illini planet, after my university). They encounter a perilous mystery about the fate of the previous inhabitants, three-legged creatures they call the Tripeds. Alas, the danger remains, and the Zoromes are also menaced and destroyed — leaving the Professor alone for future explorations, I suppose. Good Lord this was tedious, and stupid. Definitely among the worst SF stories I have read.

The little known writer this issue is Jack Egan. He published only three short stories in the field, all for Goldsmith. “World Edge” was his first. It’s about a man who seems to live in pleasant fantasy world, with a beautiful girl. But she is pleading with him to face Reality — and she claims to be his wife. The explanation is trite, and more or less what we expect — he was piloting an experimental FTL ship, and when he went faster than light he became trapped, and he only exists in his imagination. Pretty minor stuff.

“The Last Days of the Captain” is an early story by the great Kate Wilhelm. The Captain has come to a colony planet to evacuate it before inimical aliens attack. (Also, a surprise counterattack is planned, and the colonists can’t be allowed to queer the pitch.) Of course he faces some resistance, particularly from a woman whose husband is away hunting. He finally agrees to stay until the last moment, and then drive her out riskily by ground car. The story turns, of course, on their burgeoning relationship, and its inevitable end. Minor work for Wilhelm, but well done and enjoyable.

Marion Zimmer Bradley, in my experience, was not nearly at her best at shorter lengths, and indeed she wrote fairly little short fiction. But “Black and White,” though by no means great, was one of her best shorter pieces. After the holocaust, the last man on Earth is black, and the last woman on Earth is white. Can they possibly marry and further the species? Just that issue would be too silly for words, but MZB is a little better than that — the real conflict is that the black man is also a Catholic priest, struggling with his celibacy vows, and using race as an excuse to resist the woman. Then they encounter one more man — unfortunately he’s a moronic Southerner, and the results are bitter. Not too bad of a story, especially for the time.

Rich Horton’s last Retro Review for us was the February 1960 issue of Amazing Stories. His website is Strange at Ecbatan. See all of Rich’s retro-reviews here.

Ouch! I think the Neil R. Jones Professor Jameson stories are a hoot (even charming, occasionally) – as long as you have fully engaged your Golden Age Anti-Critical Gravity Drive.

I’ve had several people mention how much they enjoy the Professor Jameson stories. I have to chalk that up to a personal blindspot I have — they obviously do work very well for a lot of folks.