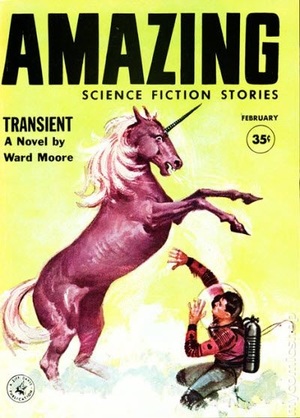 Here’s a pretty early Cele Goldsmith issue. The names on the TOC reflect that — a lot different than in the 1963-1965 era — only Ben Bova would be familiar from latter days, and he mostly did nonfiction.

The cover is by Edward Valigursky, another contributor who didn’t appear as much later on. (His last cover was for the May 1960 issue.) Interiors are by Leo Summers, Varga, and Virgil Finlay. The editorial, extremely brief, is as ever by Norman Lobsenz, and concerns suspended animation. S. E. Cotts’ book reviews cover Manly Wade Wellman’s The Dark Destroyers, which she enjoyed a great deal more than I did; The Outward Urge, by John Wyndham and Lucas Parkes, a fixup of four stories from Fantastic, which she didn’t like much at all; and John Brunner’s The World Swappers, which she thought quite good.

To begin with the short novel. Ward Moore (1903-1978) published five novels, beginning with Greener Than You Think (1947). His most famous novel by far is Bring the Jubilee (1953), a very well-regarded alternate history in which the South wins the Civil War. He is also remembered for his last novel, Joyleg (1962), a collaboration with Avram Davidson, about a Revolutionary War veteran discovered to be still alive in the present time; and for a stunning post-Apocalyptic (or “during the Apocalypse”) story, “Lot,” along with its sequel, “Lot’s Daughter.” As a writer he started late and finished early, with the great bulk of his fiction appearing between 1947 and 1962 (though a few more stories appeared in the ’70s).

“Transient” didn’t appear in book form until a small-press “Double” edition in 2013. And I think it’s fairly easy to see why. It’s a really odd story, ambitious to an extent, but mostly a mess and a failure, at least in my view. It’s about Almon Lampley, currently the Governor of his state, by appointment after his predecessor’s death. Lampley is beginning his campaign for re-election, when he sneaks out to a small town, and enters a hotel. Then things get strange … and the rest of the novel is a phantasmagoria of weird, often horrific, events. Lampley encounters strange guests, wanders into what seem other worlds, a weird department store, caves. He encounters a race of tiny people, kidnaps one such woman, who grows larger, whereupon he rapes her. He rapes another (normal) woman along the way. There are hints that all this is in pursuit of some personal issues Lampley has — to do with his relationship with his wife, and particular to the tragic history of their son — though none of this is ever made clear. It ends up being boring and unpleasant, even as paragraph by paragraph a pretty impressive imagination is displayed. Worst of all — the story basically just stops.

It seems quite odd that it appeared in Amazing and not Fantastic, especially as at that time the lettercol for Fantastic was full of complaints that the magazine was abandoning its focus on Fantasy in favor of a large admixture of SF. 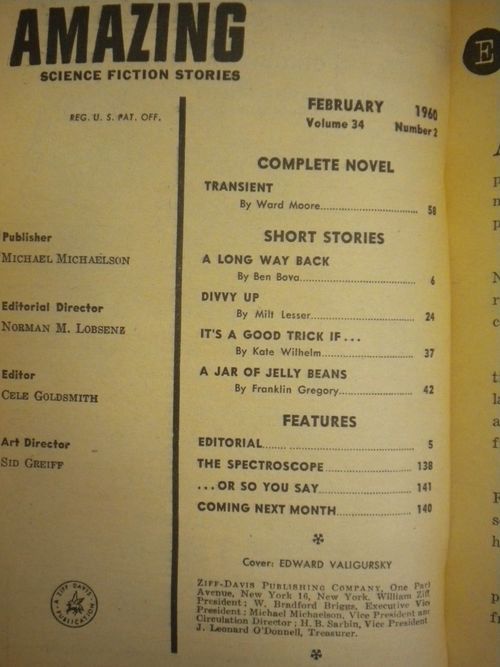 On to the short stories. The little known writer this issue is Franklin Gregory (1905-1985), who published a well regarded werewolf thriller, The White Wolf, in 1941, and seven short stories between 1950 and 1960. I don’t know if he published in any other genre. “A Jar of Jelly Beans” is an OK piece, about an overpopulated future in which hopes for relieving pressure on Earth’s resources have been laid on the space program. But it’s become clear to those in the know that this is a failure — there is no way to colonize the Moon or Mars or Venus. The protagonist is a brilliant scientist who comes up with a solution: a treatment to alter babies so that they are much smaller, and put less pressure on the environment. He starts by using his pregnant wife as a guinea pig. 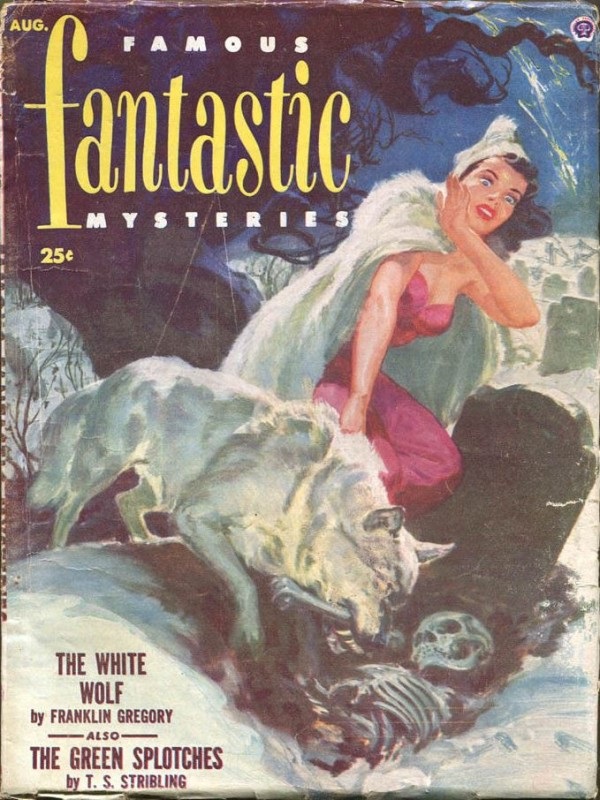 The great Kate Wilhelm’s first story appeared in one of the Paul Fairman issues of Fantastic in 1956, and her first important story (“The Mile-Long Spaceship”) in John Campbell’s Astounding in 1957, though really Robert Lowndes, at Future and Science Fiction Stories, was her most important early editor. But she did have a few stories in Goldsmith’s issues. “It’s a Good Trick If …” is an amusing short piece about a family in which strange hallucinations keep happening — even to the dog — and it becomes eventually clear that their young son is the cause. Minor work, sure, but well enough done.

Milton Lesser (1928-2008) wrote a fair amount of SF early in his career, but made his name (literally, as it turns out) as a mystery writer. Most of his mysteries were as by “Stephen Marlowe,” and fairly early on he changed his name legally to Marlowe. For his SF he used several names: Milton (or Milt) Lesser, Stephen Marlowe, C. H. Thames, and Darius John Granger being the most common. “Divvy Up” is a cynical post-apocalyptic story, told from the point of view of a man in a firing squad, who has conspired with a woman to kill the condemned man mercifully. The penalty for this is death, and what follows is a series of double crosses and thefts and so on, until the inevitable dark end. It doesn’t really convince at all, but it is executed effectively.

Finally, “The Long Way Back” was Ben Bova’s first published short story, though a juvenile novel, The Star Conquerors, appeared from Winston in 1959. Bova ended up writing a great many science articles for Cele Goldsmith, and a few stories. (Bova recently told me that he began the science articles after Goldsmith approached Isaac Asimov and asked him to do a series. Asimov told her that she should ask this young writer Ben Bova instead.) This one is also post-apocalyptic, and somewhat didactic, and the hero is a middle-aged man who has been recruited to repair a power-satellite to beam power to a small enclave of survivors. His price is help investigating the ruins of the cities to recover more knowledge — but he realizes that he has been betrayed: no one will help him, and in reality he doesn’t have enough oxygen to survive the trip back to Earth. But should he betray the whole world? He finds a solution that will benefit the remaining survivors, but not in the way they had planned. The message is pretty solid, but the story is executed somewhat clumsily.

Rich Horton’s last Retro Review for us was the January and February 1964 issues of Fantastic Stories of Imagination. His website is Strange at Ecbatan. See all of Rich’s retro-reviews here.

I was reading AMAZING at the time this issue appeared, and would continue to do so for another year or so. Although I remember virtually nothing about “Transient”, I do recall that it set off a firestorm of criticism in the letter column because there was, apparently, some sex in the story. Some of the criticism was so extreme that it made me think that the readership of AMAZING was comprised of idiots.

I’ll have to find the issues with the letters about “Transient”. I will say that the sex in the story — at least some of it — is rape, and depiction of rape is obviously a more sensitive subject than depiction of consensual sex.

Always glad to see these reviews of Goldsmith’s issues. The sense I’m getting is that, judged by the overall quality of her issues, she was not one of the field’s great editors — though much allowance must be made for (probably) a poor budget; but that, on the other hand, her magazines (especially Fantastic) published a fair amount of the decent new heroic fantasy (sword-and-sorcery), dark fantasy, and science fantasy that -was- managing to be printed in the five years or so immediately before the Ace-Ballantine editions of Tolkien changed American fantasy publishing forever. The Magazine of Fantasy and Science Fiction was rarely a home for adventure fantasy — it was too much committed to sophistication for that, although it might be willing to print adventure fantasy that had a light touch and plenty of irony, like Anderson’s Three Hearts and Three Lions.

It would be interesting to get a survey of what was available in 1960-1964 or so for the kind of reader who would really take to Tolkien when the chance came. Of course, Tolkien’s books were in print in hardcover, but I suppose many people who would have enjoyed them didn’t know about them.