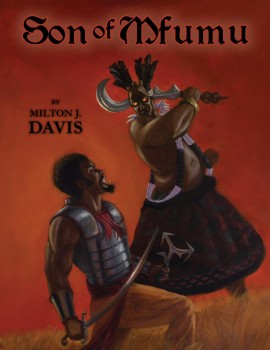 “…keep it old school. Don’t make it boring, pack it with action, don’t invert it, converge it, or subvert it. Have a hero even if he is a rascal. Have some gothic atmosphere and a touch of cosmicism. Give it technicolor and dream dust instead of shades of gray. Have the ending mean something.”  -Morgan Holmes, on writing a classic S&S story.

Milton Davis’ five volume series about the mighty and wily Changa Diop is swords & sorcery cast from a classic mold, the dimensions of which were first set down ninety years ago by Robert E. Howard, Clark Ashton Smith, and C.L. Moore. Changa is a hero through and through. Even when he’s got one eye focused on making a profit, the other is on his own honor and courage. There are wonderful descriptions of a vibrant, exciting world designed perfectly as a stage for mighty adventures, but done so well it never impedes the action. Of action, there’s more than enough for any S&S fan, ranging from duels with pirates to epic battles with demonic conjurations. Heroes are bold and villains deadly. This is the root stuff of which good S&S is made.

Whenever you get bummed out about the current state of S&S, rest assured that there are authors hewing to something like Holmes’ cri-de-coeur. And they aren’t making copies of the tried and true, but crafting their own myths and legends, adding their rousing additions to this genre we love.

Starting with Changa’s Safari (2011), and continuing for four more books, Milton Davis has sent our titular hero to the ends of the earth in search of the means to avenge his father’s murder, and claim the throne of Kongo from the usurper and sorcerer, Usenge. Each comrade with whom he surrounds himself is skilled and memorable in his own way. Foremost, there is the blue-robed and silent swordsman known only as the Tuareg. Zakee is a young Yemeni prince rescued from a disastrous marriage, the irascible navigator Mikaili is an Ethiopian with plans to become an priest someday…just never today, and finally there is Panya, Yoruban sorceress and beloved of Changa.

In the first book (reviewed here by Charles Saunders), Changa Diop and his crew journeyed east from Mombasa, through Indonesia, and onward to China. 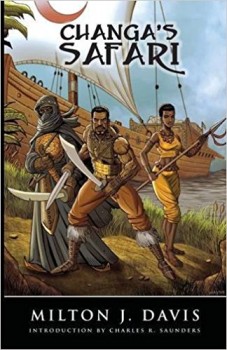 Along his voyage, Changa encounters all manner of things you’d hope to meet in this kind of story: evil demigoddesses, pirates, conniving courtiers, and a Mongol horde.

In the second book, Changa’s Safari: Volume Two (2012), Changa and his surviving company make the first leg of their trip back to Africa. It’s a truly exciting tale of epic proportions. It opens with a massive battle with pirates, takes an extensive detour to India, and culminates in war against evil magic in Yemen. If it wasn’t clear in the first book, Volume Two made it apparent that Davis had summoned up a hero fit to walk beside the giants of S&S past. In my review here at Black Gate, I wrote:

“Both Changa’s Safari volumes will transport you to a world oceans away from America. The smell of spices from distant lands will fill your nostrils and the creaking of ships on the rolling sea will fill your ears. The sudden clash of steel and the whistle of cannonballs overhead will break the quiet and you’ll feel the magical forces marshalling in the distance. Milton Davis’s stories are a reminder that fantasy needn’t be dark and brooding to be good — it can be fun.”

I was a little disappointed when Changa’s Safari: Volume Three (reviewed by Joe Bonadonna here) rolled around in 2014. I, almost as much as Changa, had become caught up in the quest to restore his kingdom. This book delays the showdown with Usenge in order to bring down the curtain on several of the book’s other major characters. I quickly got over my dismay. Davis did some of his best writing in bringing Panya, Changa’s love, home. Always an important character in the series, it is here that she gets a chance to shine entirely on her own. In retrospect, stripping Changa of his closest allies seems logical; preparing him, honing him, for a one-on-one showdown with Usenge.

The fourth book (which I reviewed here), Changa: Before the Safari, was, as the title indicates, another complete detour from the impending face-off between Changa and his nemesis, and I didn’t mind at all. It is a thrilling book, ranging from the forests of Kongo, to the deserts of North Africa, and to the waters off Ethiopia. Not only do readers get to learn the terrible details of the rise of Usenge and the fall of Kongo and Changa’s family, but also the origins of each of his companions. This book, had it been published forty years ago, would be remembered as fondly as any of the collections edited by Lin Carter or Andrew Offutt. If someone ever tells you “they don’t write S&S like they used to,” just point them in this book’s direction. 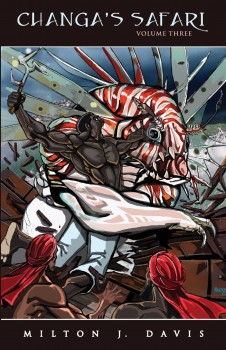 So now we come to the finale of Changa’s safari. Son of Mfumu (2017) is subtitled “A Changa’s Safari Adventure,” and technically, it is that. It’s more than a mere adventure, however. This is the culmination of Changa’s quest for justice and restoration. The title tells us exactly who Changa is: son of Mfumu, the deposed and murdered ruler of Kongo. Mfumu was overthrown by his cousin Usenge, a man driven, by jealousy and by the temptations dangled in front of him by infernal powers, to deceitful and evil actions. Now, after decades exiled from the Kongo, after enslavement, after the loss of friends and wealth, Changa has come home, his magically-blessed knives at the ready.

Davis accomplishes a lot in this short volume. While keeping the focus on Changa’s righteous retribution, the tension simmers with the introduction of several potent new characters with their own agendas. Most important is Vatukemba, a powerful woman with a legitimate claim to the rule of Kongo. She is leader of the Leopards, a cadre of women warriors. To stand a chance of facing Usenge’s army in the field, Changa must win her support. And even so, he must also win the approval of the godlike ancestors of the baKongo people. With it, he still may lose; without it he cannot win. Then there are the arquebus- and cannon-equipped Portuguese slavers standing alongside Usenge, giving him access to a technology unfamiliar in the Kongo. Davis has proven in the past that he will sacrifice characters and victory to the demands of storytelling. With that in mind, it never really feels like Changa’s success is a guaranteed thing.

Usenge also moves center stage in this story. While Davis doesn’t excuse him for his evil betrayal of someone to whom he owed loyalty, Usenge becomes more than a one-dimensional puppet dangled in front of Changa’s knives. Why and how he came to be possessed of and by wicked sorceries is made clear. It gives Usenge appreciated depth, and reveals that defeating him is imperative for more important reasons than Changa’s revenge.

Son of Mfumu is an extremely satisfying conclusion to a great series. Davis knows his characters and his world, and knows how to make the long-awaited contest between Changa and Usenge 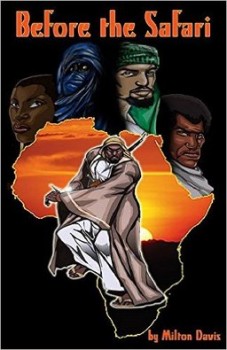 pay off. Too many times I’ve reached the end of a series and wondered what in the wide wide world of sports just happened. Not here. Davis writes in the afterword that he conceived of Changa over thirty years ago, inspired by Conan, but also envisioned as very different from a wandering barbarian. There’s never a false move, never an action that feels bent to the plot instead of the storytelling. This is the good stuff.

Looking back at these books, what I remember and like most is Changa himself. It would seem obvious that if you don’t like an author’s chosen protagonist it becomes harder to like the book, but there are plenty of nasty pieces of work populating the pages of very successful books. As someone who loves Karl Edward Wagner’s Kane stories I do understand it, but it can’t be all there is. Without ever succumbing to the simpleminded good vs. evil schematics of lesser fantasy writing, Davis never lets you forget evil is evil and that there are some people who can struggle to do good without submitting to their worst nature. Changa, especially in the first two books, is a businessman intent on riches and security, and to achieve those goals he takes dangerous, sometimes foolish, risks for which he pays heavily. But he never loses sight of justice and the importance of doing right by his friends and his crew. He never loses sight of the basic virtues of loyalty, courage, and honor. Davis never loses sight that there is room for real heroes, and that they needn’t be tarnished.

If you haven’t read the previous books, there’s no reason to start with Son of Mfumu. You should, however, have read the previous books. I wasn’t kidding earlier. There’s griping in a lot of quarters about what’s being passed off as S&S these days. It’s too anti-heroic, too cynical, driven by agendas distant from action-filled and atmospheric storytelling. If you are one of those complainers, then Milton Davis and his stories should do the trick for you and restore a little of your hope.

Fletcher, you have convinced me. I just ordered Changa’s Safari.

His association with Charles Saunders also helped to make my purchase.

Saunder’s Nyumbani Tales was my favorite book of the year.

On a related note I think Charles is deserving of World Fantasy Life Achievement Award. I hope it happens.

I love the Changa series, and have written about it, too, because Milton Davis concentrates on his characters and their relationships and interactions. He takes the time to build real human drama, writing dialog unique to each character, dialog that advances the plot and deepens the characters. No 1- or 2-D characters here — they’re all flesh and blood, not cut from the same worn-out fabric. And with all that going on, he doesn’t forget about the action, the adventure, the setting. He mixes everything together with a deft and sure hand.

@Joe – I’m in complete accord with every one of those sentiments. Again, a man worthy of more notice than he gets. In the glory days he’d be on book store shelves and drugstore spinner racks.

Fletch; I am one of the complainers! I long for old-school S&S adventures from the good-old days, and once again you show me the light. I am currently catching up with T C Rypel’s Gonji series, and now have my sights set on Milton’s Changa. As a long time fan of Imaro, I look forward to going on safari with Changa. Great review Fletcher!