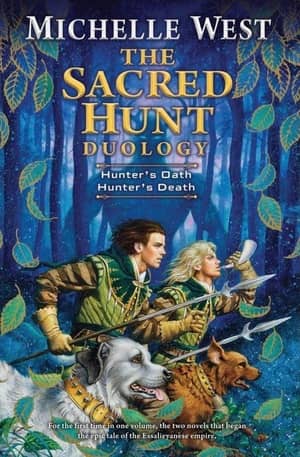 OK, this isn’t strictly a New Treasure, since it came out in 2016. But I discovered it for the first time while browsing the science fiction shelves at Barnes & Noble last week, so what the heck. It’s new to me.

Michelle West (who also writes as Michelle Sagara) is a Canadian writer with some three dozen novels to her credit, including the 6-volume Sun Sword series (which Derek Kunsken reviewed for us here) and the 7-volume House War, both from DAW Books. Both of those popular series are set in the Empire of Essalieyan, and build on events in two earlier novels from the 90s, Hunter’s Oath (1995) and Hunter’s Death (1996), collectively known as The Sacred Hunt. The former novel is still in print — pretty darned impressive after 23 long years! — but the later is not, which is a little frustrating for West’s many fans.

DAW has a fine habit of reprinting classic series in their back catalog in handsome omnibus editions, and I was delighted to find Hunter’s Oath and Hunter’s Death collected in a single 864-page paperback. Here’s the description.

For the first time in one volume, the two novels that began the epic tale of the Essalieyanese empire.

Hunter’s Oath
When the covenant was made with the Hunter God, all who dwelt in Breodanir swore to abide by it. The Hunter Lords — and the hunting dogs to which their minds were attuned — would seek out game in the God’s woods to provide food for their people, and the Hunter God would ensure that the Hunters, the land, and the people prospered.

But in payment, once a year the Sacred Hunt must be called, the God’s own Hunt in which the prey became one of the Lords, or his huntbrother–the companion chosen from the common folk to remind each Lord of his own ties to humanity. It was the Oath pledged in blood by Gilliam of Elseth and the orphan boy Stephen — and the fulfillment of that Oath would lead them to the kind of destiny from which legends were made….

Hunter’s Death
Averalaan, that most ancient of cities, had long been the home of magics both dark and bright. For the site where this most civilized city of mortals new stood had once been a dread place indeed, a citadel of evil ruled by the Lord of Hell. Only through the greatest of sacrifices had he been cast back into his own dimension. But now, trouble was once again stirring in the hidden byways of Averalaan.

Blessed or cursed by their Hunter God and gifted with his most unique creation, the Hunter Lord Gilliam and his huntbrother Stephen were about to do the unthinkable. Guided by the seer Yvaine, they would journey beyond the borders of their kingdom, something no Hunter Lord had ever done. For only in Averalaan could they find their true destiny, even if it meant facing the Dark Lord himself….

Here’s the original paperback editions, with covers by Jody Lee.

Our previous coverage of DAW’s most excellent omnibus paperbacks include: