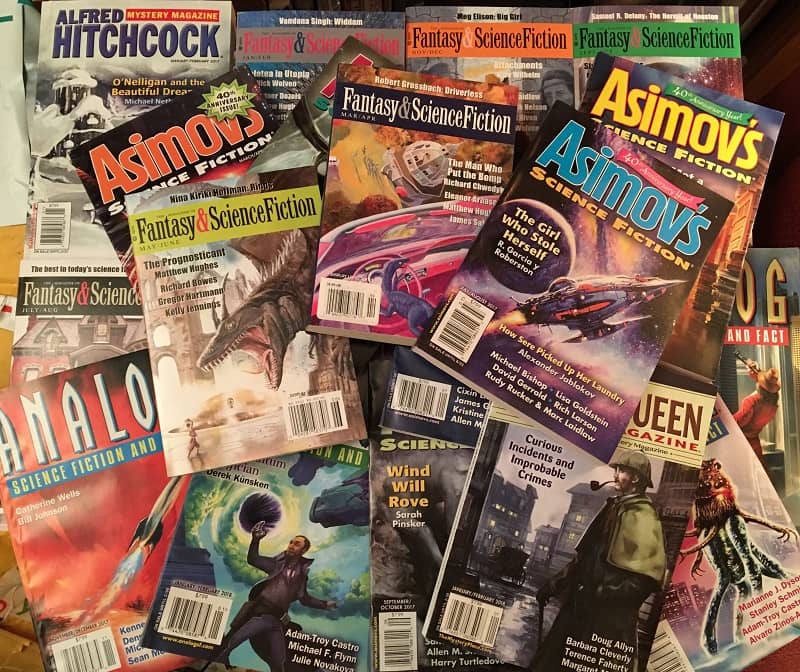 Larque Press, publishers of the excellent The Digest Enthusiast magazine, have a look at the Total Paid Distribution for the remaining genre print magazines like Analog, Asimov’s SF, Ellery Queen’s Mystery Magazine (all from Dell Magazines), and The Magazine of Fantasy & Science Fiction.

The release of the Jan/Feb issues of Dell’s digest magazines marks the first year of their bi-monthly, double-issue format. The issues also provide the publisher’s statements of ownership, which include the average number of copies for a variety of categories, over a preceding 12-month period, for the print editions. Magazines print more copies than they sell through subscriptions and newsstands. For the big five digests, excess inventory is offered in Value Packs on their websites. A great opportunity for readers to try out recent issues of a title at a fraction of its regular price.

Dell and F&SF sell far more issues via subscriptions than newsstands. For the most part, combining the two gives you the total paid circulation. However, it’s important to note these numbers don’t include digital sales, which are likely on the rise… Except for F&SF, the year-over-year numbers show declines of ~500–1000. Is this due to thicker, less frequent issues, general magazine publishing trends, distribution challenges, or something else? Without numbers on digital edition sales, it’s unclear.

Analog sold an average of 18,957 print copies of each issue last year, while Asimov’s SF sold 13,320. While these numbers are down from last year, what really impresses me is the marvelous operational efficiencies of Dell Magazines, which continues to streamline operations and sell these magazines at a profit year after year, despite decades of declining print readership. With all the publishing ventures that fail each and every week (such as the dismal news today that venerable Mayfair Games, US publisher of Settlers of Catan and Iron Dragon, is shutting down), I’m continually thankful that Dell Magazines has steadfastly weathered the storm. See our recent review of the Asimov’s/Analog Value packs here, and read more details at the Larque Press website.

I’ve never fully fathomed the logistics of scale: to an independent publisher, 15,000 sales could be a number of their wildest dreams, whereas to a big conglomerate, 50,000 sales means a publication has tanked and it’s time to kill it.

I got to thinking about that a few years ago when I learned a company was discontinuing a venerable magazine because its numbers had declined to something like 150,000. I looked at that number and thought: For just about any genre magazine publisher, a number like that would mean you were BIG TIME.

But then you get into the logistics of scale: Some big corporation probably has so much overhead, they’re paying so much to their editorial staff and photographers and writers, that maybe they are losing money selling 100,000 copies. Or maybe the profit they’re making is so small — compared to the rest of their portfolio — that it’s just not worth it to them.

In cases like the latter, I sometimes wish the big publishers would, rather than killing a well-known name, let some smaller company (like Dell) take it over. Maybe it only sells a fraction of what it once did, but the title is kept alive and *somebody* makes a little bit off it, or at least breaks even and has their dream of working on Amazing Stories or Twilight Zone Magazine or whatever come true. But noooo, the big boys have that attitude: “If I can’t have it, nobody can!” And they sit on the “commodity” of the name, which is the same as killing the name. A bummer.

> But noooo, the big boys have that attitude: “If I can’t have it, nobody can!” And they sit
> on the “commodity” of the name, which is the same as killing the name. A bummer.

I really don’t think modern publishing corporations are as evil as all that. Based purely on my own experience, it all comes down to money. By the time you make the painful decision to shut down a magazine, all other avenues have been exhausted, and you’re so deep in the hole that you don’t have the luxury of taking your time to find a buyer. The magazine has to be shut down immediately.

With the print version of Black Gate, we started hemorrhaging money with issue #8. We’d made a small but measurable profit with earlier issues, so I wasn’t too concerned. Two years later it was clear the trend was not a fluke, and we started making drastic changes — raising subscription rates, looking for other revenue sources, etc. None of it worked, and by the time the final issue came out, #15, I was losing over $10,000/issue.

Those who ask aren’t interested in learning the dark calculus of magazine finances; they want a simple answer. So I usually just shrug and say, “We tried everything.”

We didn’t try EVERYTHING of course, but we tried a lot. And based on what I’ve come to understand about larger-scale magazine publishing, it’s not that much different.

I think most failing magazines would love to find a buyer. But it’s not as easy as it sounds for magazines that are bleeding money. And by the time you make the hard decision to sell, it’s often too late to take the 6-12 months it takes to find a serious buyer.

It’s easy to just assume magazine publishers are greedy capitalists who are too grasping and stupid to share what they’ve created with others. But that has never been the case with those I’ve come to know, not once. Virtually all of them care deeply for what they’ve created, and would love to find a home for it. But it isn’t always as easy as it sounds.

I blame – as much as political correctness – the distribution routes for this.

There has to be some system that would have been considered a monopoly or conspiracy in earlier eras. When there were major bookstores, I saw the same magazine setup at Barnes and Noble, Borders – AND – Hastings for a time. It used to be Hastings had unique stuff not in the major chains and there were magazine shops owned by families again with tons of different magazines.

Like music until the internet expanded it was unless you were in a major city you had to somehow know about something and special order it – and of course that meant in real life by the time you knew about it they tanked.

I’d be buying an armload of magazines monthly if I could find them. I used to in the 90s and earlier, as much as I could afford. Fantasy, science fiction, sword and sorcery. Political and radical. Useful science and gadgetry (MAKE is good at least)

The buyers are there, but the access to the market is blocked. The PILES of “Oprah” and “Crafts” don’t sell, they get the covers torn off and put in the trash but they dominate the newsstands.

I wasn’t really thinking of magazines like BLACK GATE, where it is essentially a private publisher paying for cost out-of-pocket. Rather, magazines (and lots of newspapers) that end up being swept up in the buy-out of a publisher by some conglomerate corporation, and the scale of the property is just on a different order of magnitude from the scale of the parent company — so small that it would be like the NFL taking time to worry about opening up and profitably maintaining a popsicle stand. Take Amazing Stories, which was acquired by TSR, which was then acquired by Wizards of the Coast, which was then acquired by Hasbro. Not to say that Hasbro is evil or greedy for dropping Amazing; it’s just that the circulation at which that magazine could probably survive (somewhere in the range of the Dell magazines) is such a pittance that it doesn’t even register as a bleep on Hasbro’s radar.

I just think Amazing and Twilight Zone are two publications that could still exist, published by Dell in their format, and I wish they did.