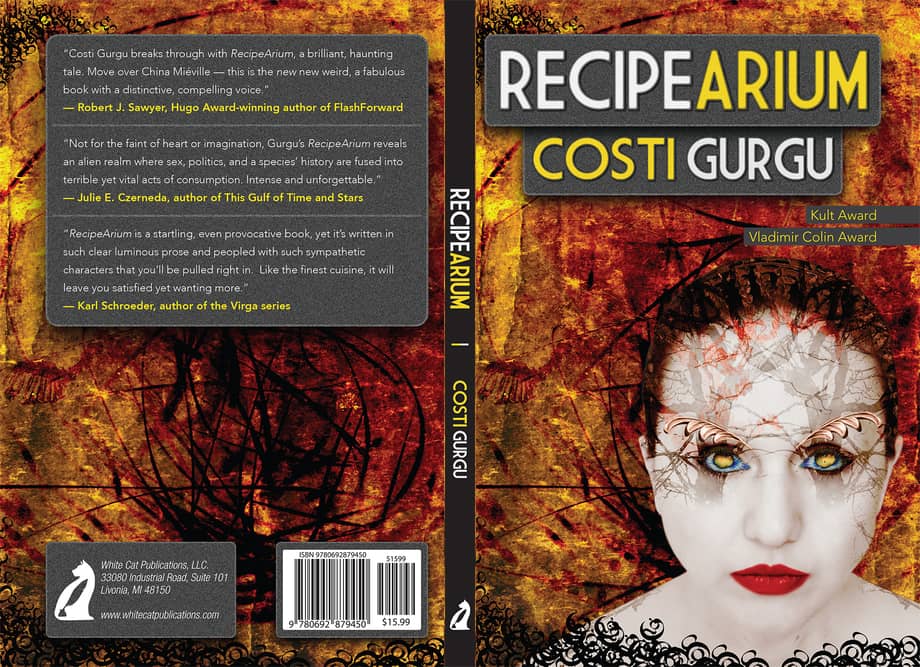 When my Toronto-based colleague Costi Gurgu launched RecipeArium last year, I read the blurbs and early reviews and really had no idea what to expect from it. It sounded either like a novel or a tongue-in-cheek alien cookbook, and I wasn’t able to make it to any of Costi’s events to figure out which it was (even when one was at a conference I help organize). Me and this book were like ships in the night. Or it was avoiding me, to hide its secrets.

Okay, maybe that sounds a little crazy. But now that I’ve finally read RecipeArium… the novel is a little crazy. And it turns out I was sort of right, since it’s a mashup of a novel and a cookbook.

As Costi tells the tale of the rise of Morminiu, a talented “recipear,” he intersperses the story with the sorts of recipes Morminiu and his esteemed master prepare – dishes like vermih in Plabos sauce and the phrilolir liqueur. It’s an interesting format that fits well with a story that (and I swear I’m not being hyperbolic) isn’t like any other I’ve read. The culture and world that Costi presents are absolutely bizarre, and with the detailed and expansive worldbuilding at play it sometimes took me a couple reads to make sure I could visualize what was happening. But that’s how expert worldbuilding is supposed to work: to the phrils that populate this story, everything around them is normal. It’s us mere humans that need to play catch-up.

I should warn you: this is the sort of novel that isn’t going to be everyone’s cup of tea. The best word I can come up with to describe it is “visceral,” but in a unique way. Dark horror has its scenes of brutal murder, romance has its raw and heart-wrenching unions between characters… RecipeArium is visceral because it’s a story about people manipulating and indulging in their various senses — and those people happen to not be human, so basically I’m saying there’s a fair bit of alien sex. Properly detailed alien sex, too.

And that’s not for everyone, but if you’re not turned off by that (ha) the way that the interactions between Costi’s characters (not just the sensual) are utterly alien but evocative at the same time will likely impress you. And on top of that you have political intrigue and secret plots, almost like one of those Master Chef shows but way, way better.

It can be difficult sometimes to find science fiction that really stands out, but RecipeArium accomplishes that, hands down. If you’re looking for something weird and compelling, you’re gonna want to check out this novel.