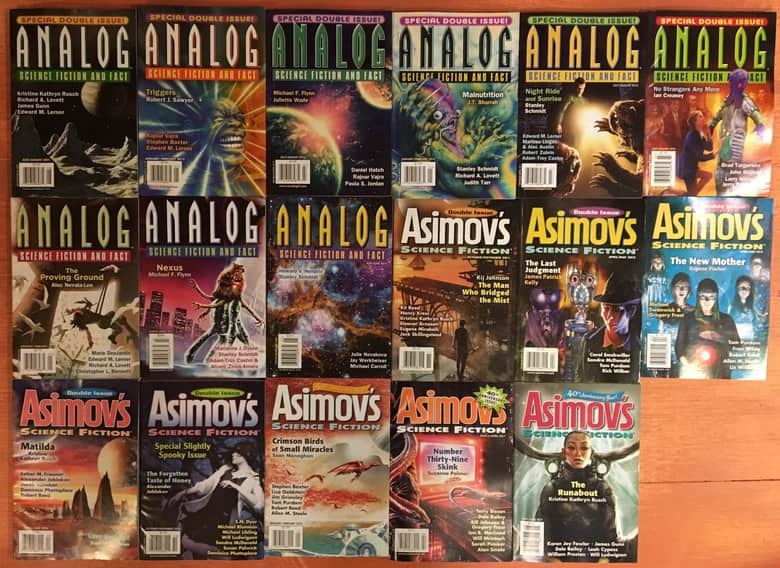 I was checking the subscription rates for Analog Science Fiction last week, as I was prepping an article on the May/June issue, when I stumbled on two curious new entries on the subscription page:

For a limited time Dell Magazines, publishers of Asimov’s and Analog (as well as Ellery Queen’s Mystery Magazine and Alfred Hitchcock’s Mystery Magazine) is selling packs of back issues at steep discounts. You can get an 8 pack (total value nearly $40) for just $6.95 — less than a dollar an issue! — or an even dozen double issues (value $96) for just $15.95. All the stock is brand new.

This is a pretty tremendous opportunity to try some recent issues of both of the leading print SF magazines on the market. 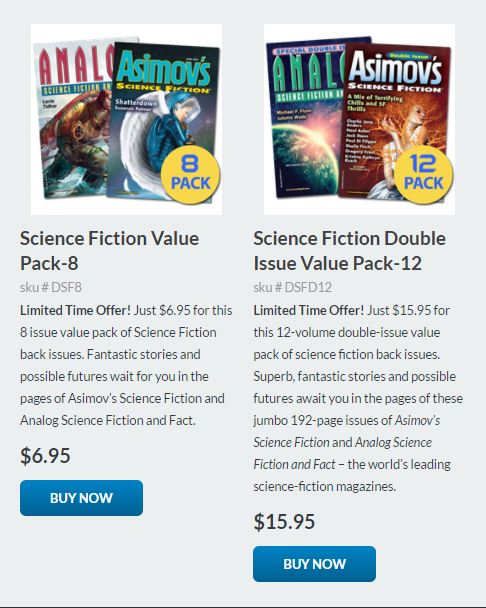 Obviously, there are caveats. You can’t pick the back issues — you can’t even pick between Analog or Asimov’s; they just send you a mix. And if you order multiple lots, as I did, you’re going to get a few duplicates. And (at least for now) the offer is limited to Dell’s science fiction magazines; the mystery magazines are not included. 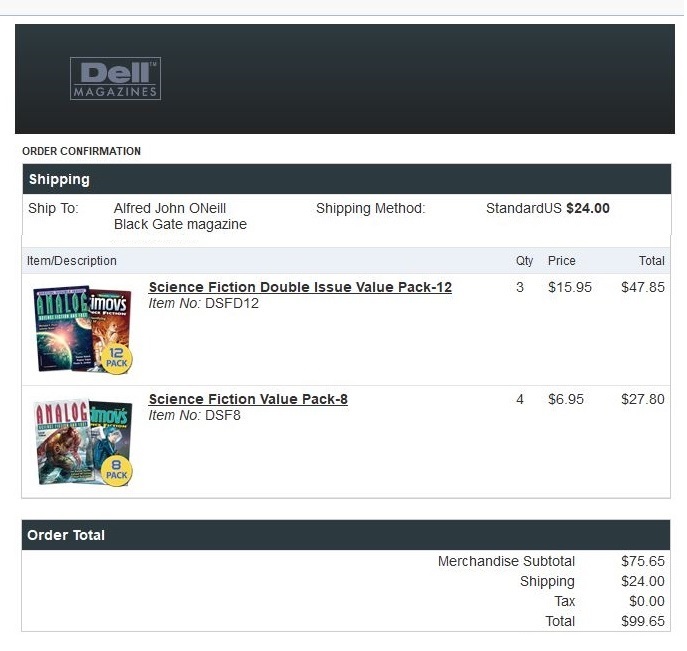 And here’s what I received: 72 single issues and 17 double issues. I didn’t quite get the 36 double issues I ordered; I assume they didn’t have that many in stock. You can see the ones I did receive at the top of this article (click the image for a bigger version.)

But the packers made up the difference — and then some — by throwing in additional single issues. There were 72 in the box instead of the 32 I ordered, my math equates that to 20 double issues. That makes up for the 19 issues they were light. 72 issues of a digest magazine makes quite a pile, as you can see from the pic below. 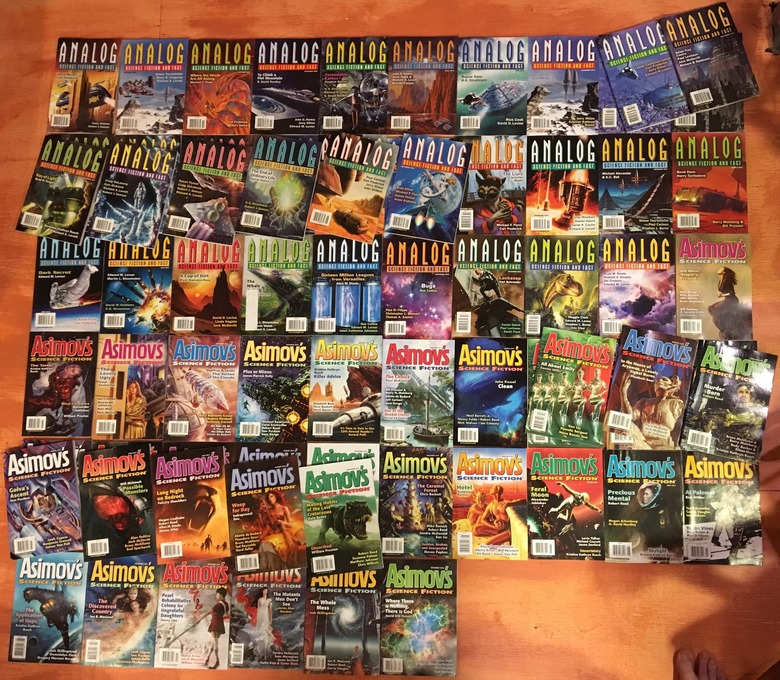 That’s a whole lot of magazines for not much money

Overall I received 16 duplicates. Discounting the dupes, I received 73 magazines in total, for $99.65. That’s a whole lot of magazines for not much money.

The magazines were all in pristine shape (although one did have a blank mailing label plastered to the cover). Overall I’m very happy with the purchase. 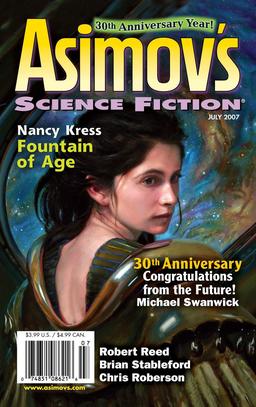 What’s in this instant collection of modern science fiction magazines? The oldest issue is from 2009; the most recent are from June 2017. It’s a roughly equal mix of Analog and Asimov’s.

Of course, the magazines don’t just contain fiction. There’s also columns, reviews, science articles, art, and more. Want to know a little more about what’s in a typical issue? We include both Asimov’s and Analog in our monthly magazine coverage; here’s links to the current issues, and a review of a recent Asimov’s by Mike Penkas:

And here’s a recent survey I did of Asimov’s from the 90s (plus a picture of my cat):

If you’ve ever been even remotely curious about modern science fiction magazines, this is the deal for you. You can try 8 issues for less than the price of a paperback — or, if you’re a little more adventurous, get a dozen fat double-sized issues for just $15.95. You won’t find a better value this month. I guarantee it.

Our Late May Fantasy Magazine Rack is here. See all of our recent magazine coverage here..

I think they’ve been doing this for a while. At least, I remember seeing ads for it for years now, so it doesn’t seem that “time limited” to me. Maybe they’re referring to the heat death of the universe limiting how long they can offer it. 😉

I haven’t tried it, of course, because as I’ve noted here before, I have every issue of Asimov’s and Analog (since it became Analog anyway), as well as F&SF and Galaxy. Other than that, it seems like a great deal, an inexpensive way to get a collection started.

Too bad you can’t pick between Asimov’s or Analog. I’ve been a consistent reader of Asimov’s for oh so many years, and I’ve only recently given Analog a go with the last two issues and absolutely love them! Been reading that one digitally, so if my need ever outpaces the current issue I can start dipping into the digital backlog.

> I think they’ve been doing this for a while. At least, I remember seeing ads for it for years now,
> so it doesn’t seem that “time limited” to me.

Probably. But I just noticed it, so it’s new to me!

Besides, even if the sale continues for a few years, the stock of older issues is finite. If you’re a reader who likes what you see above, you should probably act quickly to make sure those issues don’t sell out.

That’s because I bought them all!

> Too bad you can’t pick between Asimov’s or Analog.

Yeah, I know what you mean. I have most of the Asimov’s issues (although it was great to get another set in pristine condition).

Still, even if you discount the Asimov’s issues, you’re still buying Analog back issues at less than $2 each, or less than half cover price. Not bad at all! Consider the Asimov’s you get with your order as extra packing material.