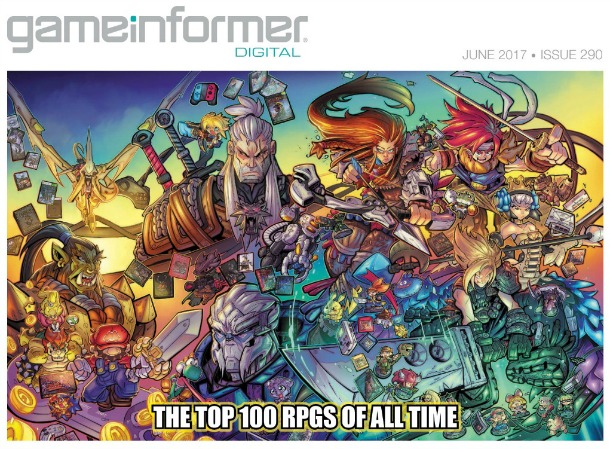 It’s a lazy Saturday afternoon here in St. Charles, and I spent much of it on the porch, listening to the rain and reading the latest issue of Game Informer.

I’m told Game Informer is the top-selling video game magazine in the US, and that’s not a big surprise. It’s my favorite of the current crop as well. While I subscribe to other gaming periodicals (PC Gamer, The Official XBox Magazine), they’re each devoted to a single platform. I own several gaming systems, and I like to keep on all of them, and Game Informer delivers. The June issue has the usual assortment of highly readable articles, including multi-platform news, reviews, and previews, plus features on the best indie PC titles, the bankruptcy of accessory maker Mad Catz, Microssoft’s lagging First Party development, and a peek at their upcoming 4K console Scorpio.

But the big draw this issue is a massive 34-page feature on the Top 100 RPGs of All Time. Pieces like this are always controversial of course (where’s SSI’s Eye of the Beholder, or Dungeon Master? Or Oblivion?) But we don’t read these big survey articles to agree with them… or at least, I don’t. I read them for the surprises, to see what games I’ve overlooked, and which ones history has judged kindly. I’m pretty old-school in my RPG-love but, somewhat to my surprise, I found myself nodding along as I made my way through the list. 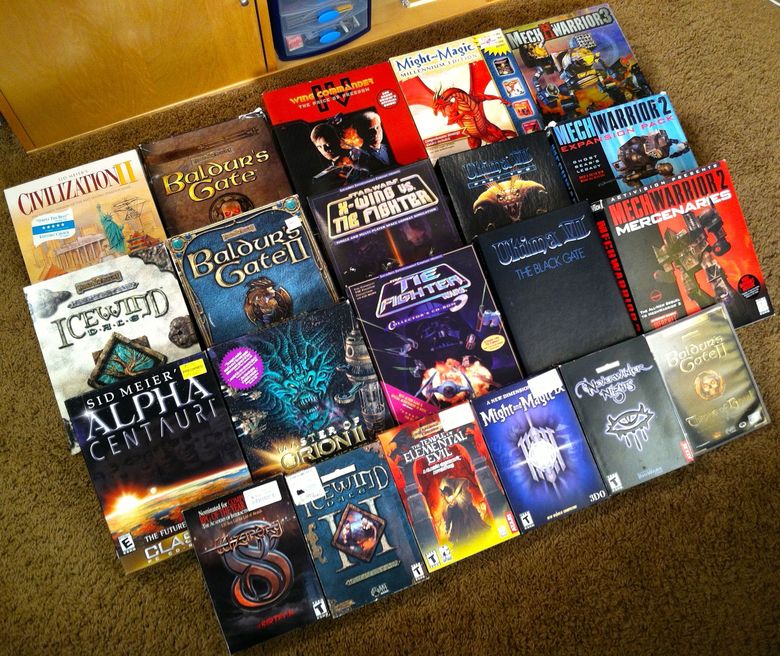 The editors have done an excellent job and, minor irritations aside, I agree with their selection. They’ve paid homage to all the great RPG franchises, including Ultima, Final Fantasy, Fallout, Persona, Baldur’s Gate, Icewind Dale, Diablo, Dark Souls, Dragon Age, Mass Effect, Xenogears, Dragon Quest, Disgaea, the Chrono series, and many others. Long before I got to the top of the list I made my guesses which titles would be in the Top Five, and I was right about four (and I should have guessed the fifth).

The list spans a surprising 36 years, with the oldest title (Wizardry: Proving Grounds of the Mad Overlord)  from 1981, and the most recent (Zelda: Breath of the Wind, Horizon Zero Dawn and Persona 5) all from 2017. Overall the list tended to favor newer games, which I think is to be expected. By far the most prolific platform was the PC, which was home to 55 games out of the 100 on the list.

Overall, the list is a great introduction to the hobby — and a fun topic to debate with your friends. I have no idea if the issue is still on the shelves, but you can order copies right from the Game Informer website, and get digital copies here. Print copies are $5.95 for 96 pages in full color, or $19.98 for a 12-issue subscription. Digital subscriptions are just $14.99/year.

Our previous coverage of computer and video RPGs includes:

Our Late May Fantasy Magazine Rack is here. See all of our recent fantasy magazine coverage here..

I didn’t realize Game Informer was still around. My brother and I had a subscription from about ’98 to ’05. It was always consistently good. Their reviews always seemed to agree with my tastes.

It’s definitely still around, and still relevant. I just renewed my sub. Well worth the money.

I know, I know – lists: they’re controversial. Still, though: no Dungeon Master? No Eye of the Beholder 1/2? I see no Ultima Underworld…and seriously? Horizon: Zero Dawn ahead of Might and Magic and Pool of Radiance?! Skyrim at number one is just insane. It’s a fun game, but the best RPG ever created seems to really, really stretch it.

Anyway, I’ve always loved RPGs, so it’s always good to engage in a discussion of them.

I think the chief draw of lists like this is that it gives fans something to argue over. 🙂

I never played Skyrim…. but that made me an outlier in my house. My teenage kids (all three of them) have been excited by some games over the years, but nothing like the anticipation leading up to the release of Skyrim on 11/11/11. They played that game for YEARS. Yeah, there have been games that superseded it since (I’m thinking primarily of Witcher 3 and Mass Effect) but none of them had the long term staying power of Skyrim. My kids STILL occasionally play it, nearly 6 years after it was released. If I had to pare our house down to a single RPG, it would probably be Skyrim. So, yeah, I wasn’t too surprised to see it at #1.

My all-time favorite RPG is Pool of Radiance, but I figure that makes me old. I was pleased to see it rank so highly. I haven’t played Horizon: Zero Dawn, but it seems like the kind of game that could have real longevity. As long as Might & Magic? That remains to be seen. But I know which one I’d rather play today, and it ain’t M&M.

I agree completely with you about Ultima Underworld, though. That game revolutionized the industry. The only problem is…. what game would I take off the list to replace it with?

I admit I’ve never quite been able to get into the Elder Scrolls games. Two issues: First, I feel like I need a bit more direction or focus in terms of what to actually do. Second, and more importantly, I really hate first-person real-time melee combat. Ah, well. I actually played 100+ hours of Kingdoms of Amalur: Reckoning, which was probably the closest I’ll get to that kind of big, open-world game.

My favorite RPG would probably be Knights of the Old Republic II (with the restored content mod). I’m also a huge fan of pretty much everything Bioware has done from Jade Empire to Mass Effect to Dragon Age. Also really liked The Witcher and various Final Fantasy installments.