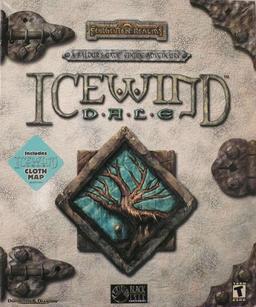 Ian Williams at Paste Magazine has posted a fond retrospective of the great years of D&D videogaming, correctly noting the current trend towards retro-dungeon crawls among independent developers.

Everyone’s going old school in their computer roleplaying games these days. Recent games like Grimrock 2, Pillars of Eternity, Divinity: Original Sin, and the steady stream of roguelikes hark back to the golden era of the form, when kobolds were kobolds and the gold coins flowed freely. The biggest, best chunk of those old games came, of course, from the Dungeons & Dragons bloodline.

His list includes most of the great D&D games of my youth, including (of course) Baldur’s Gate, Neverwinter Nights, and the brilliant Pool of Radiance. I was especially pleased to see one of my favorites, Icewind Dale, rank so highly on his list.

Icewind Dale doesn’t have the literary aspirations of its predecessors in the Black Isle catalog. It wants to let you fight waves of monsters and crack open the best parts of the old AD&D 2nd Edition system… Icewind Dale is best viewed as a system first, narrative second, type of game. You make a party from scratch, something you weren’t strictly allowed to do in Baldur’s Gate or Planescape: Torment. And they knew you were going to min-max it. There were no complicated voiceover interactions with your party members, no main character with an intense personal story. Just the cold winds of the North, a simple storyline, and the chance to play murderhobo with the greatest RPG engine the D&D games put out.

I agree that this is a very good list. I wish that it had included _Warriors of the Eternal Sun_ :

If anyone hasn’t played it yet, I highly, highly recommend Planescape: Torment. You can get it on modern sites like Steam or GOG for not very much money, and add various mods or patches if the mood takes you.

Throw as many points as possible into WIS, INT and CHA — you want to open up as many conversational avenues as you can. And if you need to occasionally use cheat codes during combat, well, there’s no shame in that as far as I’m concerned. The important thing is to experience the world and the story.

Joe — believe it or not, I’ve never played Planescape. But I remember the huge impact it had on the industry when it was released.

I’d really love to see an Enhanced version released, the way Beamdog has updated IceWind Dale for tablets. Because I really, really want to play it.

Planescape Torment was one of the best games of any type I ever played.

> I agree that this is a very good list. I wish that it had included _Warriors of the Eternal Sun_

Holy cats, I forgot all about that one!

I’m not sure I’ve ever met anyone who’s PLAYED it. Is it as good as it looks?

It’s a blast. It uses the Moldvay/Cook basic as the rules set.

“Just the cold winds of the North, a simple storyline, and the chance to play murderhobo with the greatest RPG engine the D&D games put out.”

I still go with SSI as having the supreme RPG game engine. I do love the Infinity Engine games, but the real time with pause gameplay is too messy and it has the critical flaw of having some truly awful pathfinding. I can’t count how many battles I’ve lost simply because I’ve chosen a character, clicked on a monster, and then watched in horror as my guy ran in the opposite direction of where the monster was, forcing me to micromanage his ass back to the fray. No such issues in SSI’s turn-based system!

I remember being annoyed that the upgrade to your stats on reaching a new level on Planescape Torment were random.

Unfortunately, I don’t know if we’ll see an enhanced PS:T (or an enhanced IWD2, for that matter) — per the guys at Beamdog, those games were running on a different engine and would be much more challenging to update. But yes, I’d also love to see a new & improved version.

It took me I think 7-10 years to finish Torment. It was one of the first games I bought when I got a real computer in 2001 or so. I played a good long way into the game, then got stuck (in Hell, as it happens) unable to move forward and with my last save being several hours before, so I just kind of gave up.

Many years later (although I think it was before the GOG rerelease) I reinstalled it, started over and just powered through and didn’t regret a minute of it.

It is great that we’re coming back to these types of games again. Icewind Dale is my favorite game; for exactly the reasons you mentioned. It was great to make your own party from scratch, and not get your healer as part of a two person team. Then have the other team member “Unexpectedly Perish” so you can go back and add that paladin you wanted.

I also enjoyed going through the game with an all dwarven fighter party. Traps! Those things we walk over? We call that the floor!

I played Planescape Torment and the Baldur’s Gate series to death but I found Icewind Dale a little lacklustre in comparison, if still good. And they were a challenge too, nothing quite like finally killing that damned **** and progressing with the plot.

So happy that this format of rpg game is coming back. With Pillars of Eternity, Divinity: Original Sins and the revamped older games we now have a lot of excellent games to choose from.