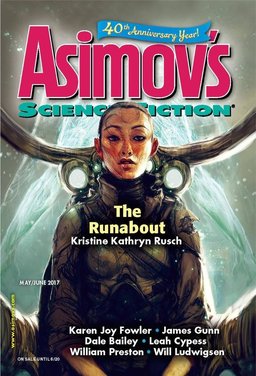 Asimov’s Science Fiction is celebrating its 40th Anniversary Year in 2017, and in her editorial this issue Sheila Williams reflects on the many milestones and anniversaries she’s had during her 35 years with the magazine.

Alas, the magazines’ fifteenth anniversary was not a happy occasion. Isaac died on April 6, 1992, leaving all of us heartbroken. He’d told me several times before he died that one major reason he’d founded the magazine was to give new writers a welcoming place to break into science fiction. He also expressed his deeply held wish that the magazine continue long after his death. While the following year wasn’t a special anniversary year, it was a happier one. In March 1993, Rick Wilber and I announced the creation of what would become known as the Dell Magazine Award. This award, which goes to the best SF or fantasy story by a full-time college student, seeks to further Isaac’s legacy of supporting emerging authors. Later that year, I hit another important milestone — the birth of my first daughter, Irene.

I don’t remember if we held a twentieth anniversary celebration for the magazine in 1997, but I do remember that the magazine hit a grand slam at the Hugos. Asimov’s stories picked up the award in all three short fiction categories, and Gardner Dozois won one of his many Hugos for best editor. The twenty-fifth anniversary is another blur, partly because my second daughter, Juliet, was born in early July….

2017 is shaping up as a very good year, as well. As I write this, we are formulating plans for a fortieth anniversary celebration on April 13. It will be held in New York City at the Housing Works Bookstore Café on 126 Crosby Street. Although this issue doesn’t go on sale until April 25, I hope that many of you will have heard the word via social media and will have commemorated the occasion with us. Later in the year, Prime Books will be publishing Asimov’s Science Fiction: A Decade of Hugo & Nebula Award Winning Stories, 2005 to 2015 in conjunction with our anniversary year. In addition to many of the authors who appeared in our Thirtieth Anniversary Anthology, this book contains stories by Sarah Pinsker, David Levine, Karen Joy Fowler, Elizabeth Bear, Vylar Kaftan, Will McIntosh, and others. We hope to have a book signing in place in NYC to celebrate the launch of the book. Please keep up with us on social media to learn more about our plans.

The May/June issue of Asimov’s SF contains what may be the biggest novella they’ve ever published. Here’s the issue description from the website.

We’ve managed to stuff an entire short novel by Kristine Kathryn Rusch into our May/June 2017 issue. The Runabout finds the always-intrepid Boss and her team salvaging Dignity Vessels in the Boneyard. Apparently abandoned by the mysterious Fleet thousands of years earlier, this graveyard is rich with ships carrying the powerful anacapa drive. The drive allows faster than light travel and, some think, it may also provide a method for traveling through time. One small runabout could hold an answer, but exploring the ship will be extremely dangerous. Success isn’t guaranteed, and searching the runabout may not be worth the terrible toll it could take on Boss and her crew. Don’t miss this thrilling tale.

Karen Joy Fowler returns to Asimov’s with an eerie story about “Persephone of the Crows”; an intriguing series concerning pilgrims by James Gunn begins with “The Escape of the Adastra: Asha’s Story”; Peter Wood drolly wonders if we’re “Tired of the Same Old Quests”; while Dale Bailey invites some troubled young people to “Come As You Are”; William Preston suggests we watch an alarmingly “Good Show”; Leah Cypess conducts a chilling investigation of life “On the Ship”; Jay O’Connell introduces us to “The Best Man”; the repercussions of genetic engineering are examined in Ian McHugh’s “Triceratops”; and in “Night Fever,” Will Ludwigsen offers us a deeply disturbing alternate-history depiction of the seventies.

Robert Silverberg’s Reflections column updates us with “Advertisments for Myself”; James Patrick Kelly’s On the Net compares “Harry and Dot”; Norman Spinrad’s On Books warns of “Wolockification”; plus we’ll have an array of poetry and other features you’re sure to enjoy. 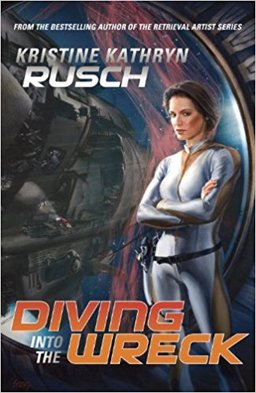 Just how big is Kristine Kathryn Rusch’s short novel The Runabout? 44,874 words, according to the word count at Rocket Stack Rank. It is part of her Diving Universe series, which includes five novels (Diving into the Wreck, City of Ruins, and others) and nearly a dozen stories. Here’s Rusch, from her website.

The Runabout Appears… In A Magazine!

Last fall, I surprised myself by selling the magazine rights for The Runabout to Asimov’s. Yes, before you ask, there will still be a standalone book edition, but this magazine publication comes first.

This week, the issue appeared, making The Runabout the first novel published in its entirety in Asimov’s in the magazine’s 40-year history. I’m grateful for all the faith that Sheila Williams has in my work. As a former digest magazine editor, I know how much an editor has to believe in a writer to use up that much real estate on one piece of fiction.

If you want to sample the story before picking up the issue, click here for the excerpt.

The actual standalone book will appear in October in ebook, paper, and audio editions. So if you can wait for that, go ahead. (I’ll let you know when you can preorder it.) But you can find out what happens next right here, right now, by getting Asimov’s, and you’ll also get even more great fiction from some of my favorite short fiction writers (including but not limited to Karen Joy Fowler and Dale Bailey).

Here’s the complete Table of Contents for the May/June issue.

“Come as You Are,” Dale Bailey
“Night Fever,” Will Ludwigsen

The cover art is by Jim Simpson.

We last covered Asimov’s SF with the March-April 2017 issue.