If you’ve jumped into the 5th edition of Dungeons & Dragons, I’ve got a book for you.

Until now, you haven’t really needed anything apart from the main three manuals (The Player’s Handbook, Monster Manual, and the Dungeon Master’s Guide). But with Xanathar’s Guide to Everything the Wizards of the Coast have created a handy companion with utility for both players and dungeon masters.

Sure, if you’ve followed the various expansion books closely you’ll have seen some good stuff: Volo’s Guide to Monsters helps flesh out some nasty critters so you can better bring them to life AND know their weaknesses, and the Sword Coast Adventurer’s Guide provides background material if you’re playing in a specific setting (or perhaps one similar to it). Xanathar’s, though, is something like the original Unearthed Arcana was for old school D&D.

It’s 192 pages are broadly divided into four categories. Chapter 1 is given over to new options for characters, Chapter 2 is stuffed with game master tools, Chapter 3 has spells, and the Appendix, for some reason, is mostly devoted to possible character names, some 15 pages of them. To me, that feels like the book’s only mis-step. Long lists of English, French, and Celtic names can be found in numerous places, and while the elf and dwarf (and other) categories can be useful for inspiration, I’d rather have seen these names left on an online companion and this space given over to some other useful subject – sandbox gaming, for instance – that never gets enough coverage.

But the rest… the rest is gold.

Chapter 1, Character Options, is my favorite, and devotes almost 60 pages to different ways to tweak each of the Dungeons & Dragons characters classes. In other words, these are sub-classes. The wizard gets one sub-class; nearly everyone else gets three, and a lucky few get four new sub-classes. But don’t think the wizard, or anyone else, gets neglected, because there are additional goodies to give more background for every class, even if you don’t want these new sub-classes. For instance, in the Warlock section you get material for generating your relationship with your patron and the terms of the pact you have with it. The Rogue gets some tables to help determine recurring adversaries, benefactors, and guilty pleasures. Paladins get some handy charts dedicated to their holy symbols, their temptations, and more.

And as for those sub-classes themselves, they’re all pretty cool. You can find exhaustive lists of them all with some searches on the interweb. Suffice to say that if you’re wanting to play a more blade-centric, swashbuckling Rogue or Bard, the book has your back, just as it will cover you if you want your Paladin to be more of a pacifist, or if you want your Fighter to be a Samurai or a Cavalier, or if you want a kind of fighter/magic user, you can play the Warlock’s Hexblade sub-class. These are just a few examples; the book has goodies galore, and none of them are pointless add-ons.

Rounding out the section are ten pages devoted to helping generate character backstories, and some cool racial feats.

I think the thing I like most about all this stuff is that it does NOT feel like the start of endless min/maxing like you got in 3.5. These seem simply like tools to better help a player create the archetype that interests him or her most. 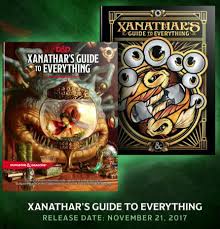 If I like Chapter 1 best because I love its creativity, I like Chapter 2 because it’s so very useful. Therein are all kinds of guides for helping bring a campaign world to life, from descriptions of what exactly a cartographer’s tools might do to ways that long periods without rest affect characters. The early pages are given over to clever little ways to enrich play. Next up is some great advice for designing monster encounters based on region and character level, followed by another look at ways to design dungeon traps, along with numerous examples.

As useful as that material can be while creating adventures, I think my favorite section of this chapter is a bit on revisiting character downtime. This is probably the best look I’ve seen, in all my years reading game manuals, at bringing downtime to life. First, it helps create NPC rivals with agendas to improve upon role-playing opportunities while characters aren’t off on adventures. Second, it brings the typical “not-adventure” activities to much greater life. For instance, buying magic items, or complications that might happen while carousing, divided by social classes. There’s some cool ideas on ever-popular topics like crafting magical items, researching lore, training, and much more. Each come with outcomes, complications, suggestions on how best to run such things, and, when applicable, typical costs.

Finally, the chapter closes out with some additional guidelines for awarding magic items, including tables that incorporate some “common” magic items that are detailed over five pages. These aren’t +5 flame bows of giant slaying, but nifty items with minor enchantments, like a cloak that billows dramatically, or a magical eye to replace one lost in combat, or a pouch that allows you to pull out any non-magical spice you need for your cooking. These are the kinds of things a magical society would probably have lying around that don’t really affect the game mechanically but add great storytelling framework. 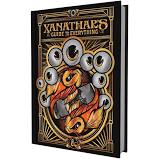 Chapter 3 is devoted to a long list of everyone’s favorite subject, spells. Well, everyone but me. I’ve always been a little disinterested in spells, so I had to talk to some other folks about the ones in here so I could discuss the chapter properly. The most important thing to mention is that every spell-using class gets some new ones. Druids, Sorcerers, Warlocks, and especially Wizards get a big helping of different new things to cast. The Wizard alone has nine new cantrips, and, for example, thirteen new spells just at the 5th level. The spells themselves range from stuff that are so obvious they should always have been there, like a spell that conjures flame arrows or one that allows you to transfer your own life energy to heal someone else, to cool stuff you wish you’d though of, like a new spell from the great Tenser himself.

Finally, before the aforementioned Appendix B there’s an appendix with advice on running campaigns, adventure duration, character creation, how to select what variant rules to use, and so on. It’s good, solid advice. I just wish there was a little more of it.

Xanathar’s Guide To Everything retails for $49.95 at most book outlets, but can be found more inexpensively through some online vendors.

Howard Andrew Jones is the author of the historical fantasy novels The Desert of Souls, and the The Bones of the Old Ones, as well as the related short story collection The Waters of Eternity, and four Paizo Pathfinder novels. The first book of his new series launches this summer. You can keep up with him at his website, www.howardandrewjones.com, and follow him on Twitter or follow his occasional meanderings on Facebook.

I’m convinced! Buying it next week from my FLGS. Even though I don’t even have a playgroup to do my campaign, but it sounds like a good read on its own right.