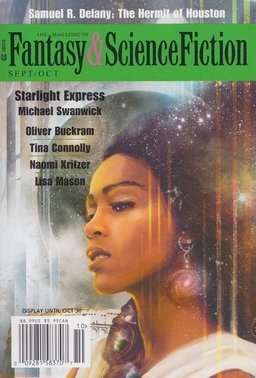 The September/October F&SF is the 68th Anniversary issue, and it contains some nice special atractions, including fiction by Robert Reed, Michael Swanwick, Tina Connolly — and, most surprising of all, a brand new novelette by the brilliant Samuel R. Delany, who hasn’t appeared in F&SF in 40 years. Here’s a snippet from Charles Finlay’s intro.

Throughout his career, Delany’s work has pushed the boundaries of sf to address more adult situations and issues, particularly at the intersections and language and memory, sexuality and society. He returns to these themes again in his first new science fiction story in a decade… this new story would get an NC-17 rating at the movies and is not appropriate for younger readers.

It’s tough to compete with the return of a Grand Master, but Michael Swanwick manages it with his cover story, “Starlight Express.” Here’s Jason McGregor’s review at Tangent Online.

Via Flaminio’s eyes we learn about Roma in the far, far future and the woman who seemed, not to go to the carrier beam of the transmission station relic as suicidal people often do, but to come from the carrier beam where, as far as most people know, people haven’t come from for millennia. How her universe has changed, and how she changes his, makes the bulk of the tale.

I could understand seeing this as a dull and underplotted story if the poetry of it all doesn’t speak to you but, if it does, it’s a really remarkable story (if more bitter than sweet) which strongly evokes deep time and vast space and an enduring humanity… beautiful. Recommended.

I note that the cover price has increased a buck this issue, to $8.99 — still a bargain, if you ask me. Here’s the complete Table of Contents.

The cover this issue is by Maurizio Manzieri for “Starlight Express.”

This issue is on sale until October 30. We last covered F&SF with the July/August issue.

Our July Fantasy Magazine Rack is here, and all of our recent magazine coverage here.

“Starlight Express” is indeed excellent — but Delany’s story is brilliant.

Glad to hear that, Rich!