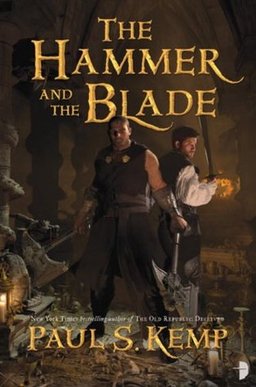 With the hammer-wielding (sort of) priest Egil and the (not really) rogue Nix, Paul S. Kemp created his entry for the classic swords & sorcery duo contest. They made their debut in The Hammer and the Blade (2012).

We meet them media res as, in search of treasure, they prepare to penetrate the last defenses of an ancient tomb. Like characters in a classic buddy movie, they bicker and banter.

“You may have heard but you didn’t reply, so let me restate. Are you acquainted with a door I couldn’t open? I press the question only to illustrate your softheadedness, as demonstrated by a faulty memory. It’s important you understand your limits.”

Egil tossed the sliver to the ground, tore a strip of cloth from his shirt, and pressed it to his leg wound. “There was that time in the Well of Farrago–”

Nix shook his head emphatically. “That was not a door.”

Egil looked up, thick eyebrows raised. “It had hinges, a handle. It opened and closed. How can you say–”

“Of course it was a hatch, and only a fool priest of the Momentary God would confuse a door with a hatch. A hatch is a different thing from a door. A hatch is troublesome. You see? Does having an eye inked on your head make your other two blind, or otherwise detrimentally affect your cognition?” 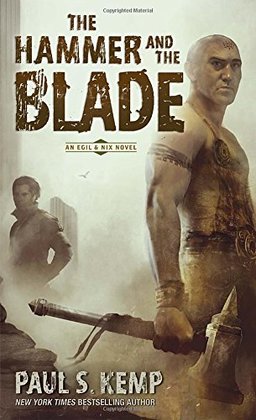 By the end of the opening adventure, Egil and Nix decide to retire from tomb-robbing and buy the Slick Tunnel, the tavern and whorehouse they frequent in their home city, Dur Follin. On this last expedition they had faced a squadron of zombies, a flood of acid, and near-death from a fight with a demon. Unfortunately, their killing of the demon thoroughly upset the plans of the sorcerer Rakon Norristru. On the very first night of the adventurers’ tenure as tavern owners, the wizard comes for them.

Rakon doesn’t want Egil and Nix for revenge. Instead, he needs them to go on one more dungeon expedition. To preserve his family against its enemies Rakon must, from time to time, perform a terrible ritual with a demon from House Thyss. The demon killed by the two thieves was one of only two members left of the House. Now, they are needed to secure a device of great power in order to free the only other demon able to meet Rakon’s needs. When they refuse — they never hire out — Rakon’s men kidnap them. Rakon binds them to his will with magic and they are soon off through the deadly Demon Wastes.

Before The Hammer and the Blade, Kemp was a writer of D&D and Star Wars novels. In this, his first original work, he has created terrific characters and placed them in a okay story. Odd pairings are not uncommon in swords & sorcery. Just looking to the works of some of the authors Kemp acknowledges, there are Moorcock’s Elric and Moonglum, and Leiber’s Fafhrd and the Gray Mouser. Making two more adventurers stand out from the crowd takes skill, and Kemp pulls it off.

The most striking aspect of Egil and Nix is their heroism. Despite their grave-robbing ways, despite their ownership of a rowdy tavern and brothel, we never doubt they are men of real virtue and honor. While little insight is provided into Egil’s mind, we get to see his nobility on display, particularly when he is ready to give up his own life for another. Nix’s mind and history are explored in detail. He grew up an orphaned scavenger on the worst streets of Dur Follin, but instead of it warping him, it appears to have made him morally stronger. Both men, even when they realize they might be under a witch’s spell, risk their lives to battle both Rakon and another demon in order to save the witch and her sister from a horrible fate.

Without giving anything away, the events surrounding Egil’s and Nix’s determination to save the witch and her sister are powerful. While Kemp keeps his story swords & sorcery, he brings up issues rarely addressed so bluntly in the genre. The place of women in the violent worlds of S&S is often as prize or victim. Kemp takes that on directly, and convincingly forces his two heroes to do the same.

Too many efforts at wit or humor in fantasy are neither. The steady back-and-forth between Egil and Nix is. It never sounds like badly written sitcom dialogue, but instead believable badinage between two long-time friends. 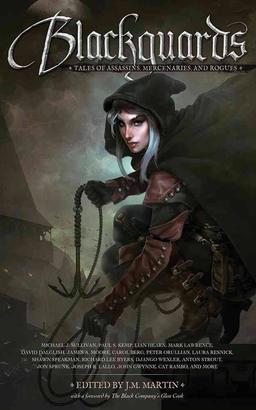 The general plot and the world of The Hammer and the Blade are solid. Rakon’s plan is a major work of evil-sorcerer-scheming. While ultimately just one more fantasy city with impossibly vile slums (here called the Warrens), there is some clear thought on display in its creation. There’s one serious misstep, where Kemp reveals exactly how the story is going to conclude. He doesn’t spell it out, but he does telegraph it very, very loudly.

I’ve been thinking a lot lately about why swords & sorcery works best in shorter forms, and Kemp’s novel helped me reach a partial conclusion. The Hammer and the Blade is about 400 pages long. Too many pages aren’t filled with action and adventure, but overlong passages with Egil, Nix, and some of the other characters bonding in the desert. Their race to face off against Rakon is presented in far more detail than it needs. If either of those sequences helped build an atmosphere of supernatural terror or drear foreboding, that might be okay, but they don’t. Instead, they’re just sort of boring and come across as stumbling blocks to the action. Short works don’t have room for these distractions. S&S should move. When the book avoids dull distractions, it’s great, but when it doesn’t, it’s dull.

Still, don’t let that last paragraph dissuade you from investigating this book. I love Kemp’s dialogue and I love these two characters. Despite the described flaws, I strongly recommend it. There is too little actual S&S being written and published professionally these days. Often what’s called S&S is not, and The Hammer and the Blade most emphatically is. The book isn’t perfect, but it’s soundly built and Egil and Nix are characters worth meeting. I’m a little chagrined I’m only meeting them now.

There are already two more books in the series: A Discourse in Steel (2013), and A Conversation in Blood (2017). There’s also a short story featuring the two, “A Better Man,” in the anthology Blackguards.

Fletcher Vredenburgh reviews here at Black Gate most Tuesday mornings and at his own site, Stuff I Like when his muse hits him. Right now, he’s writing about nothing in particular, but he might be writing about swords & sorcery again any day now.09

I thought that he tried way too hard in that first book to make the characters the next Fafhrd and Grey Mouser. It left me with mixed feelings about it.

I felt like there was less of that in the second one, which I enjoyed more.

Kudos on writing a post on it. I put one off for over two years and clearly still haen’t gotten around to it.

Egil and Nix might be the best new S&S out there, and as far as a traditional sense, it is the best.

I really like this series. Yes, s-&-s is always going to suffer the need to be stretched out to novel length by main stream publishers, I’m afraid.

I enjoyed the 2nd & 3rd novel as audiobooks. The banter between Egil & Nix had me laughing aloud more than once. I am going to revisit THE HAMMER AND THE BLADE in audio sometime in the near future.

I am reminded that I really need to read the third of these.

@Bob B – I get you, but I thought he did an adequate enough job making them his own characters. Both are far gentler and self-sacrificing men than either of Leiber’s heroes.

@Kid Greg – Until HAJones writes more Abir and Dasim, it just might be.

@Paul Mc – Even though I bought it earlier this year, your reviews are what prompted me to finally crack the electronic spine. Yeah, some of their interactions are laugh-out-loud funny.

@Fletcher – I need to read HAJones!

@Kid Greg – Yes, you should – as should everybody.

@Harold – Good to hear. Yours is another recommendation regarding S&S I take very seriously.

Admittedly, I didn’t get passed page 100, but of what I did read, I didn’t like. Apart from the opening, which was quite well done, what I did read was deathly slow and dull. There was even a scene in a brothel that wasn’t exciting at all, and all brothel scenes should be exciting!

Anyway, glad others liked it, but I gave up. Been trying to flog it cheap on ebay for months with no takers. That may say something; it may not!

@Robert M. – I agree, it bogged down at times, but I found the characters and the direction Kemp was building them in enough to float me across those doldrums.