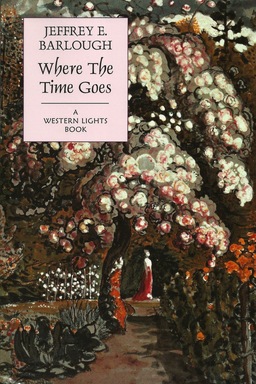 If you’ve been looking to jump into Jeffrey Barlough’s Western Lights series, his ninth and latest installment makes a good diving board. The books are set in a post-apocalyptic alternate history where woolly mammoths and monsters from Greek and Etruscan legend rub elbows with ghosts, spirits, and worse, but Where the Time Goes adds a third genre to the cake batter: time travel.

Philip Earnscliff, a junior partner in the firm Bagwash and Bladdergowl, has been summoned to the country estate of the elderly Hugh Calendar to put Calendar’s affairs in order; Calendar has been in a coma for some weeks and appears unlikely to recover. The lawyer spends his hours paging through Calendar’s papers, gazing out the window at a neighboring estate called the Moorings — abandoned and ruined following an accident during Calendar’s youth — and taking nightmare-plagued naps. Earnscliff has no reason to think anything is amiss, at least not until he walks in upon Miss Carswell, Calendar’s young and attractive acquaintance, with a syringe full of sleeping elixir stuck between Calendar’s lips. Soon enough Earnscliff finds himself back in time, trying to repair the tragedies of the past while, as a side quest, solving the mystery of a local serial killer that strikes every six years.

It’s been a long strange trip for Barlough’s Western Lights since their 2000 debut, Dark Sleeper. The early books with Ace were sinister and Gothic, yet since moving to Gresham & Doyle they’ve generally trended toward cozy mysteries with supernatural elements. 2011’s A Tangle in Slops was more Midsummer Night’s comedy than horror; and the last two installments — What I Found at Hoole and The Cobbler of Ridingham — could have been written by the lovechild of Agatha Christie and M.R. James.

Where the Time Goes pushes the series back toward its dark origins by drastically upsetting that coziness. Fans of the series know that an ill-defined cataclysm struck the Earth of the Western Lights, wiping out humanity beyond North America’s western coastline. Here the cause of that cataclysm becomes a central plot point; but time is a tricky thing to muck with, and the book’s cinematically cliffhanger ending — like a cherry on top, Barlough adds a fourth genre to the narrative — makes clear the repercussions of Earnscliff’s actions will resonate through future volumes. A tenth book, The Thing in the Close, is already in the works.

You’d be hard-pressed to find bigger fans of Barlough and the Western Lights than the gang here at Black Gate. You can read an interview I had with Barlough, or you can comb through our archives:

Cover art is by the 19th-century English artist Samuel Palmer, about whom one can read here:

The painting is “In a Shoreham Garden.” It belongs to the period discussed in Geoffrey Grigson’s very fine book Samuel Palmer: The Visionary Years. For Palmer’s whole life and lots of fine color reproductions, see William Vaughan’s Samuel Palmer: Shadows on the Wall.

I’m so far behind on these – I really need to catch up.

Has anybody who has read most/all of these books know if there is more worldbuilding in the later books about why the world is the way it is or confronting that different history? I find it really intriguing and liked the first two books a lot but was really surprised at how light a touch it was on explaining why this world existed.