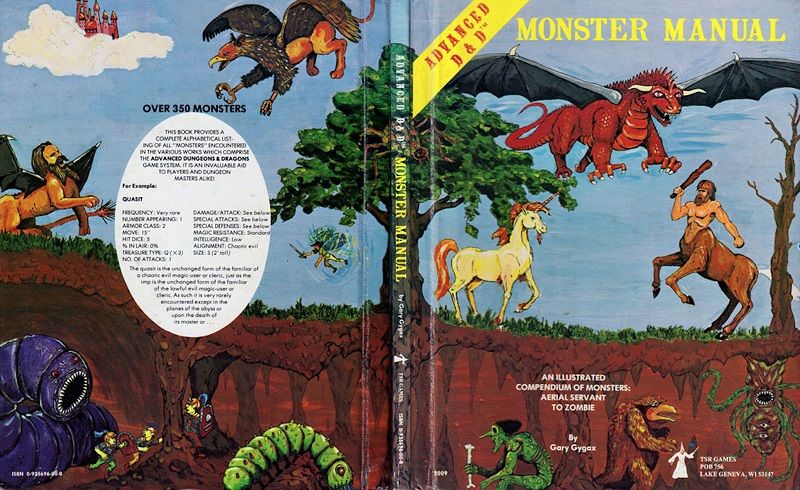 I discovered Dungeons & Dragons at the age of six. I didn’t really understand the rules at the time, but the original Monster Manual and Deities & Demigods (the one with Elric and Cthulhu) were my gateway drug. Those books had everything I needed to spin off into the place I wanted to be. And when the Fiend Folio and Monster Manual 2 came out, and I started to play in earnest, I quickly became a full on junkie.

Throughout grade school, high school, and college, I returned to the same house and crew of friends that I started rolling dice with whenever I could. It almost seemed like a secret life I kept on the side, though in truth it was more like my stand-in for church: the pseudo-religious trappings of dice, paper, and pencils; the ritual of the suspension of disbelief and speaking in tongues; the doctrine of the books as led by our dungeon master/priest. The smell of that house, and the feel of sitting at the table — how could something so simple and stagnant carry such potential? Despite the hovering kindly mother, the stink of filthy teens, and the array of gross snacks, at times it felt like real magic was possible there.

The satanic panic of the 80’s around D&D, an absurd made-for-TV movie, and the “not-cool” stigma of roleplaying — we just closed the blinds and rolled through that nonsense with a chuckle and a finger in the air. In those days, I had trouble sitting still long enough to read books, and movies were not interactive or epic enough for my taste. Only that house, my characters, and the dice could give me what I craved.

AD&D was just the start: Gamma World, Call of Cthulhu, Palladium Fantasy, Warhammer, MERP, and many more. Aside from D&D, Call of Cthulhu and Warhammer were the two that really inspired me. The occult-based mythos of Lovecraft and the lurk of chaos in Warhammer both painted a darker, more visceral fantasy world than D&D had for me — not just whether you kill or are killed by the monster, but whether your mind and soul will be twisted and broken in the process. A bit of that struggle shows up in all of my stories thus far.

SLUD, the troll protagonist of Cold Counsel, was originally a character I campaigned with in a game called Palladium in junior high school. He seemed to take on a life of his own during that time, and I haven’t been able to shake him since. I could historically be a cautious and overly thoughtful player, but with SLUD I found myself taking larger than life risks. If someone shot a ballista at the party, I’d declare that SLUD would catch the arrow with his teeth. A roll of 20 would be required, and somehow SLUD made it happen almost every time. When he failed, he’d fail in spectacular fashion, his exploits deserving of headshakes of disbelief, nervous laughter, and repeated retelling.

But I moved to Brooklyn the summer after finishing college, and lost touch with my gaming history. Instead, I buried myself in the pursuits of screenwriting and filmmaking, and, in that, I forgot some of the more epic roots of my imagination as well. My first, still unpublished, book had been brewing the whole time, and it took me a long while to reclaim focus on that fantasy drug again and put words together. Steadily the habitual need for the grand story returned, and once I found the rhythm of writing every day, I didn’t miss the camaraderie of the game as much anymore.

I got the same sort of thrill from working through and talking about the story as I had playing the games. Now that reverent feeling I craved could be accessed by simply tuning out the world and getting on a computer or notebook. I could go it alone, save of course for my very patient wife who also got to bear witness/suffer through my increasingly obsessive attention to it all.

Writing expressly for the gaming audience was never really the point, I just wanted to tell a good story with characters that I loved and wanted to explore. But I did, subconsciously or otherwise, strive to capture the fast moving, immersive entertainment of the old D&D campaigns, while also injecting brutal, believable darkness to the mix that made it feel more real to me. Just because a story is about goblins and trolls doesn’t mean that it shouldn’t strive for some form of verisimilitude. That’s why I prefer to couch even the most fantastic narratives I write in some mytho-historical context. If someone once believed in these characters and concepts as part of a religion and culture of the past, then for me it lends some occult validity to the story.

For this reason, SLUD’s world is a place of dwindling myths and dying dreams that draws heavily from Norse mythology, but takes place long after Ragnarok has come and been forgotten. The giants and gods have been wiped out and reduced to stories, and only his old Aunt Agnes and a few of the long-lived elves in their far-off courts remember the old tales in their truest form. It’s a world separated from but right next to our own, and it’s a place that I try to paint with bare brush strokes that only hint of the greater picture to come. Hopefully, SLUD’s story is just getting started.

About ten years back, a few of my hometown friends, the wife, and I actually broke out the old books and modules to play AD&D a few times with me as the DM. We touched upon the old magic for a few nights, but adulthood has a way of making such moments hard to come by, and I haven’t been able to recapture that place since — except through writing.

I suppose that I’ve never fully recovered from that old gaming addiction, and I hope that I never will.

Chris Sharp is the author of The Elementalists: The Tipping Point Prophecy (2014) and Cold Counsel, available now from Tor.com Publishing. Read the complete first chapter at Tor.com.

I’m sure everyone’s entry into gaming is a little different, I think that the “addiction” is much the same.

All the Best,
Anthony

Just seeing that wrap-around cover of the original Monster Manual and wonderful childhood memories flood back.

Interesting to read about how your novel’s character grew out of an RPG character. I wonder how many characters in fantasy literature of the last 40 years that is true of? Must be a substantial number, considering how many writers probably first engaged in serious character creation through the medium of role-playing.