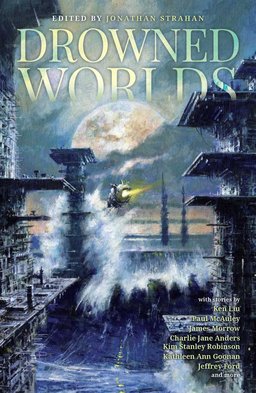 Jonathan Strahan has edited some extremely impressive anthologies. In fact, we assessed his recent Meeting Infinity as the most successful anthology of 2016 (using our own highly subjective yardstick, of course.) His latest, Drowned Worlds, contains all-original fiction by some of the biggest names in SF, including Kim Stanley Robinson, Ken Liu, Paul McAuley, Kathleen Ann Goonan, Rachel Swirsky, Charlie Jane Anders, Lavie Tidhar, Jeffrey Ford, and James Morrow, and it promises to be just as interesting. On his Coode Street blog, Jonathan summarizes it thusly:

I think it’s sharp, pointed, timely and sometimes satirical. I think it’s about who we are when faced with disaster, and not about disaster. I think it makes for good reading.

Last call for the Gone World…

We live in a time of change. The Anthropocene Age – the time when human-induced climate change radically reshapes the world – is upon us. Sea water is flooding the streets of Florida, island nations are rapidly disappearing beneath the waves, the polar icecaps are a fraction of what they once were, and distant, exotic places like Australia are slowly baking in the sun.

Drowned Worlds asks fifteen of the top science fiction and fantasy writers working today to look to the future, to ask how will we survive? Do we face a period of dramatic transition and then a new technology-influenced golden age, or a long, slow decline? Swim the drowned streets of Boston, see Venice disappear beneath the waves, meet a woman who’s turned herself into a reef, traverse the floating garbage cities of the Pacific, search for the elf stones of Antarctica, or spend time in the new, dark Dust Bowl of the American mid-west. See the future for what it is: challenging, exciting, filled with adventure, and more than a little disturbing.

Whether here on Earth or elsewhere in our universe, Drowned Worlds give us a glimpse of a new future, one filled with romance and adventure, all while the oceans rise…

See all of our coverage of the best in upcoming fantasy fiction here.

Slightly OT, perhaps, but I seem to be noticing a trend toward quite long short story titles or perhaps it’s nothing new and I’m just waking up to it. Have you noticed it?

I’ll give it to Strahan: he knows a safe bet. Does he ever do anthologies that contain up and coming writers? Or does he let other editors do the heavy lifting?