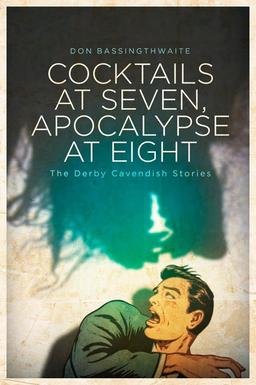 Don Bassingthwaite is a man of many talents. We published his terrific sword & sorcery tale “Barbarian Instinct” in Black Gate 5, and an excerpt from his unpublished Kingdoms of Kalamar novel Point of the Knife in Black Gate 7. On top of that, he was the magazine’s Games Editor for our first four years, recruiting top-notch talent to write reviews for us, including Jennifer Brozek, Howard Andrew Jones, Dave Webb, Johanna Meade, and Michael Thibault.

Don’s writing career has taken him to the top of the industry, with a dozen novels in the last ten years, from publishers like Wizards of the Coast and White Wolf. Over the years he’s also produced a series of highly regarded holiday tales, collectively known as the “Derby Cavendish” stories.

Earlier this month Don revealed the cover of his first short story collection, Cocktails at Seven, Apocalypse at Eight: The Derby Cavendish Stories, in a Facebook post.

What’s this? A collection? Oh, you shouldn’t have!

ChiZine Publications has just revealed the cover (by the incomparable Erik Mohr) for my forthcoming collection Cocktails at Seven, Apocalypse at Eight: The Derby Cavendish Stories — more details to come but look for it this fall!

Cocktails at Seven, Apocalypse at Eight: The Derby Cavendish Stories will be available in both ebook and print editions. Look for it from Canadian publisher ChiZine later this year. I don’t have many more details at the moment — but trust me, as soon as I know more, so will you!