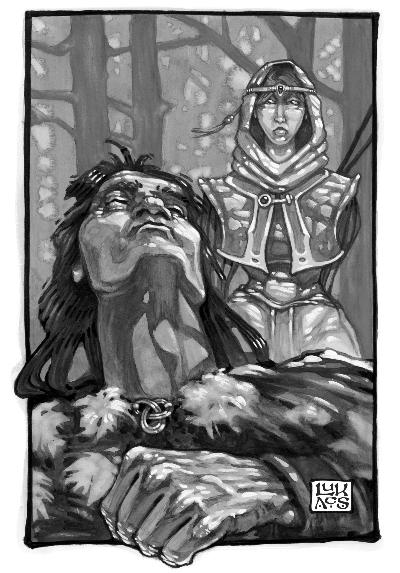 The Northman emerged from the trees beside the track like a ghost stepping through a wall. “We’ll be safe here,” he grunted. “For a time.” He swept his horse’s reins up from the ground — the beast had stood with perfectly trained patience since its master had dropped them when he dismounted — then cast a sour glance back toward her. “You’ll have to go on foot, too.”

Cacia Darviste returned his look with all of the bone-tired stubbornness that had kept her going for the last two weeks. “How far, barbarian?”

His shoulders stiffened. They always did when she called him that. Sometimes, she was almost certain she could see his thick, ragged hair bristle like a dog’s. “Twenty-five yards. No further than you insist on wandering at night to make water,” he shot back. Her gasp of indignation just earned a disinterested shrug. “Come now. There isn’t much time.”

In that, at least, he was right. Cacia looked at the thick wall of tangled branches and conceded that he might be right about the necessity of walking as well. She slid out of the saddle and followed hastily. The Northman held aside a branch for her, opening up a gap wider than many of the doors in her father’s mansion in the city of Illear were… had been. Cacia squeezed her eyes shut for a moment and refused to think about her old home. “You don’t need to make such a wide opening for me,” she told the Northman.

Passing through the thicket made her feel like a mole burrowing through the ground. The Northman opened up a passage through the low-hanging branches and high-growing bushes and she followed blindly. When they had passed, the passage closed up again. Twigs and thorns caught at her riding dress and her wimple, though after weeks of travel and flight neither were as fine as they had once been. Twenty-five yards stretched into what must have been a mile. Cacia paused for a moment and looked back. Impenetrable as the trees might seem, the animal track they had been following was still disappointingly visible through the thick leaves. “You’re sure this will be enough to hide us from the Arkins?”

“This, clever woodcraft, and your silence.” He pulled aside a final bush and new light poured into the shadows. “We’ll have shelter, too.” Cacia stepped out of the trees and her eyes went wide. This time her gasp wasn’t one of indignation but of amazement.

The cracked and heaved remnants of some ancient plaza made a clearing in the dense forest. Moss covered heaps at its edges marked the remains of collapsed outbuildings. Cacia started when she realized that one such mound slumped not more than six feet from her, dark crevices peering out between the furry green stones. On the far side of the broken plaza, however, were stones untouched by moss: the main building of this ruin, its roof long collapsed but its walls almost entirely intact.

“What is this place?” she asked in awe.

The Northman was already leading his horse carefully across the treacherous surface of the plaza. Cacia hurried to catch up with him. “No, what was it before? Did you know it was here?” He shook his head. “Then how did you know to look?”

“I knew,” he said. “The way the trees grew beyond the track. The way the track bent — the animals that use it avoid this place.” He pointed to a wide gap that must once have been a doorway in the ancient walls. “In there.”

Cacia stopped instead. “Animals avoid this place?” Her stomach was twisting in ways it hadn’t since the Northman had led her away from the Arkin zealots and the burnings in Illear. Suddenly there was a sinister shadow over the quiet ruins and the gap ahead was a dangerous maw. “Is there a reason why they avoid it?”

The Northman snorted. “I thought we ignorant northerners were supposed to be the superstitious ones! The animals avoid it because it’s a place of man, city girl.”

Anger flared hot enough to burn away the knots in Cacia’s stomach. “Don’t call me Ã¢â‚¬Ëœcity girl,’ barbarian.” Ignoring his glower, she marched past him and into the ruins. Whoever had built this place had built well. The floor was buried under remnants of the collapsed roof and the dust of centuries, but it had not buckled with the passing seasons. Four strong walls enclosed the space and the remnants of great stone arches leaped overhead. Once this would have been a grand hall. Cacia turned around and sniffed her reluctant approval. “What’s to stop the Arkins from realizing it’s here as well and coming to investigate?” The Northman didn’t answer her. She sighed and turned to meet the inevitable stony glare. “Well?” she demanded. “If you could find it, why won’t they?”

“The Arkins will be busy thinking they are still following us on the track. Besides, I doubt they will have my instincts for the forest.”

Somehow the Northman’s glare managed to become even more stony, but Cacia stood up to it. Finally he simply snarled and tossed his horse’s reins at her. “I’m going to lay a false track for the Arkins. I should be back just before sunset.” He jerked his head toward one corner of the ruined hall. “The old ceiling is solid there. There will be room for the horses and you to stay out of the rain.”

“Then call it a barbarian instinct, city girl.” The Northman wrenched a bow and quiver from his saddle and stalked out of the ruin. “Put feed bags on the horses and they’ll stay silent. Maybe you want to try one yourself!”

The rain came, just as the Northman had said it would. Cacia wasn’t entirely surprised. Rather than risk the heavily patrolled trip south through Arkia directly to Arinsia, the Northman had led her north and east. They would skirt the haunted Cold Hills, passing above them and down into the country of Gabria on the other side. A clever plan if a hard one — it always rained in northern Arkia.

At least she had the horses settled by the time the rain started. The animals stood quietly, champing at the contents of their feed bags, surely as glad of the rest as she was. Cacia made her own meal on bread, apples, and a cold sausage. No fire allowed. The Northman had drilled that into her quickly enough. She had almost gotten used to not having one. It would be nice just to sleep under some semblance of a roof tonight. She sat on one of the packs and looked around the ruins as she ate. It was a queer sort of place. The gap where they had entered was the only door and there were no windows. Perhaps that was why the walls had remained as solid as they had over the years.

Aside from the great broken hall, there was also only one other room to the building. Directly across from the main entry, an arched doorway opened into a smaller chamber. Perhaps it had been an audience room of some kind: the thick slab of an empty dais sat in the center of the floor, illuminated by a narrow hole in the ceiling directly above. The room had survived the years in even better shape than the outer hall. Not one crack seemed to mar the walls. Certainly the small chamber was the most solid part of the ruins, but it would also be a trap for anyone seeking refuge within — there was no other way out. There was something eerie about it as well, a stillness in the shadows that made her stomach twist.

Just as it had twisted when she had first seen the ruin. “Silly city girl,” she chided herself between bites of apple.

She hadn’t even thrown the core away when the whinny of a horse broke the rain-damp silence.

Cacia froze, then spared one sharp glance to her side. Both her horse and the Northman’s stood asleep, their heads down. Suddenly her heart was providing thunder for the rainstorm. The Arkins.

With silent haste, she rose and crossed the broken hall, trying desperately to listen as she stepped carefully around the debris littering the floor. She paused in the shadows beside the gaping entryway and pressed herself into the cold stone. There were no more sounds. The ancient plaza before the ruin was still. She dared to swallow and to breathe again. Had it been her imagination?

No. Suddenly she caught the creak and jingle of harness. The stamp of a hoof. A voice. Her breath caught in her throat.

The Arkins were on the track beyond the trees.

The complete version of “Barbarian Instinct” appears in Black Gate 5.