A Kingdoms of Kalamar Novel 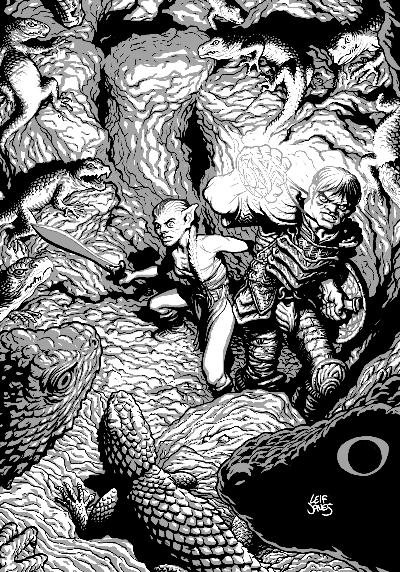 Fifteen years ago, the Empire of Kalamar conquered the dwarven nation of Karasta. Now dwarf rebels are fighting back, armed with crude weapons of a strange amber metal that burns the flesh and boils the blood of those it wounds.

Charged with finding the source — and stopping the supply — of these weapons, Imperial agent Narika Gelomas, a sil-karg hobgoblin half-breed, has followed a misguided holy warrior, Leim, to the town of Trarr in the rival nation of Drhokker. She has discovered the source of the amber metal in the alchemically-treated venom of massive, otherworldly serpents. but a duel with Leim has left them both prisoners of the beautiful, treacherous Irani, the mastermind supplying weapons to the rebels.

Irani is planning to leave Trarr shortly with a new shipment of the weapons — but without her prisoners. She has ordered Narika and Leim thrown down into the pit-portal that leads to the lair of the deadly serpents and sealed them inside…

With a rattle of armor and a deep groan, Leim stirred under Narika.

The sil-karg’s eyes snapped open. Instinct sent her body arching like a spring, thrusting her away from a potential threat. Every movement sent echoes trembling off of rocky walls. It was only when she stopped moving, crouched with her sword before her and Leim’s slowly moving form outlined by the darkvision of her hobgoblin heritage, that she remembered where they were. The pit. The unnatural cavern under Aelfegg’s smithy. A plane of elemental earth. With that came three additional thoughts.

First: I’ve never been anywhere like this. The cavern was relatively small, little more than a bubble in the stone, though broad cracks in the walls hinted at passages beyond. Up above her, the ceiling was marked by a smooth disk that must have been the underside of the circle traced in brown powder on the smithy floor. There was a tremendous sense of weight and pressure in the stale air. Endless, unyielding weight. She had been deep underground once or twice, and the sense of so much earth and rock above her then had been unnerving. Here it was almost terrifying. Narika had felt out of place many times in her life, but never as completely as this. This was not somewhere that creatures of flesh and blood belonged. Even the rank, foul air seemed out of place. It was thick, like it was slowly being squeezed until it too became rock.

All around them lay the massive forms of the serpents, as thick as her leg and with scales like hammered copper. She had glimpsed the same serpents while hidden in the chamber above. They were slumbering now, after having had the poison milked from their fangs by the traitor alchemist Aelfegg.

Her second thought: Gods, I hurt! Her entire torso ached ferociously, with a special tenderness across the lower right where Leim had driven his armored knee into her and a sharp, insistent pain on the left where something had cracked when he’d smashed her with his shield. Another ache sent dull, throbbing waves through the side of her head — the blows from the shadows that had felled her. If the cloaked figure that had delivered them had somehow been Irani, then the little woman carried a surprisingly strong punch.

Assorted cuts and bruises made themselves known every time she moved, minor injuries from the duel with Leim and her fall to the cavern floor. She had felt worse, though, and most of her aches were already fading with time.

Aelfegg had said the serpents would sleep for hours. How much of that time had passed? How long did they have before the creatures woke up?

Narika clenched her fingers tight around the hilt of her sword Lament and looked up at the smooth circle on the cavern roof. Aelfegg had opened the pit — the portal to this place — with a magical command. “Bardham nevek!” she shouted, trying to duplicate the wizard-smith’s words. “Bradham nevek! Brardhrm nevek! Brardham nebek!”

The lid on the pit didn’t even quiver — but the heavy air caught her words and sent them echoing eerily around the cavern to return even louder than before. Against that sudden cacophony, Narika heard the gentle rasp of metal on metal.

The copper serpents were stirring.

So was Leim. The big Fhokki warrior sat up in a rattle of armor, then groaned again, adding new noises to the lingering echoes. Eyes opened in a battered face, then grew wide in shock — and blindness. Pure human, there was nothing for him to see in the absolute darkness. Narika threw herself at him even as he opened his mouth and sucked in breath. Her free hand slapped over his mouth before he could cry out. “Easy!” she hissed. “We’re — ”

He bit her hand.

Narika stifled a gasp. She squeezed her hand hard across Leim’s jaw, inflicting pain right back on him. “Listen to me!” she said. “We’re in danger. It’s dark because we’re in a cave.” She went with the simplest possible explanation. “There are monsters all around us. You need to be still and quiet. Understand?”

His teeth didn’t let go of her hand. Narika flipped Lament around and touched the sword’s point to Leim’s neck, then withdrew it. “Understand?” she asked again. “Endanger us and I will kill you. Work with me and maybe we can find a way out.”

Leim hesitated a moment, then nodded. He let go of her hand. She let go of him. Leim took a few deep breaths and looked around as if there was actually something for him to see. “This is no cave,” he said. “I can feel that.”

“It is. It’s just what’s around it that’s different.” She slid around behind him. “I’m going to cut the ropes on your arms.”

“What’s around a cave that could feel like this?” There was a hint of fear in his voice. Narika didn’t answer him, just began working at his bonds with Lament. It was delicate work with the big blade. Leim twisted, almost cutting himself. “I said what could make a cave feel like this? What’s going on?”

“We were used,” said Narika with a growl. “Irani used us both.”

Leim had no response to that, but Narika could feel his body stiffen. She paused in her cutting. “If you’re thinking about fighting me over her, think again. You heard her in the forge. She played us against each other.”

“Did you really follow me from Zoa because of the diamonds I was carrying?”

More serpents were lifting their heads and looking at the alien creatures in their midst. One or two slithered across each other, unwinding their coils. The sound brought Leim’s head around. “This isn’t a good time for questions,” Narika told him and turned Lament back to his bonds.