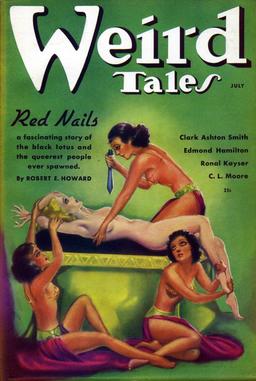 Howard Andrew Jones and Bill Ward wrap up their re-read of The Conquering Sword of Conan by Robert E. Howard with the novella “Red Nails,” the last Conan tale REH ever wrote. In a letter to Clark Ashton Smith, Howard said:

Sent a three-part serial to Wright yesterday: “Red Nails,” which I devoutly hope he’ll like. A Conan yarn, and the grimmest, bloodiest and most merciless story of the series so far. Too much raw meat, maybe, but I merely portrayed what I honestly believe would be the reactions of certain types of people in the situations on which the plot of the story hung…

“Red Nails” was originally serialized in the July, August/September, and October 1936 issues of Weird Tales. Here’s Bill and Howard:

Bill: Arguably, the final Conan stories seem to show a bit of a distancing between REH and his creation… I think anyone reading “Red Nails” who has some awareness of REH’s life will at some point stop to ponder the question of whether or not he ever intended to return to Hyboria, or if perhaps the Cimmerian himself had run out of stories to dictate at REH’s shoulder. Whatever the answer, “Red Nails” does serve as a fitting farewell to the character and world that have become so dear to so many, offering a story of adventure, intrigue, and exoticism…

Howard: [Valeria is] the closest we’ve come for a long time to seeing someone who is Conan’s equal partner… although she’s not, really. She IS the most formidable of the women who appear in Robert E. Howard’s Conan stories… But what a masterful opening, with Valeria finding the lay of the land, then mystery following upon mystery. The strange skeleton, the lost city, and the exotic environment are all incredibly compelling.

Way back in the day, I storified one of our gaming adventures and posted it to Usenet, as a few of us were want to do. Someone replied, “You played through Red Nails.”

Years later I picked a REH collection by the same name, and sure enough, we’d played through Red Nails almost beat for beat. (From the same book I discovered I’d also played through The Man-Eaters of Zamboula.)

Sad part is, although I remember our gaming adventure very well, I remember nothing from Red Nails. It’s the only Conan story I’ve read that I’ve retained nothing from. Not sure if it didn’t work for me as a story or the place of its would-be memories are held by the gaming session, but yeah, nothing. (I do remember several elements of Man-Eaters.)

Made for a memorable game though. My thief loved sneaking around that deserted jade city.

What a great story! I remember reading Elizabeth Moon’s The Deed of Paksenarrion trilogy, and realizing she’d obviously played through Gary Gygax’s Village of Hommlet (The first part of Temple of Elemental Evil). It was a strange epiphany, but it added to my enjoyment of the book.

Such histories are deep into my history, but I seem to recall uncertainty whether she had played through Hommlet or merely bore witness to group that did.

Sad to say, I’ve only that series for 20+ years and still haven’t read it. It remains perpetually near the top of my pile. One of these days…

Ooh, my Hommlet character was a paladin. I *really* need to move that series to the top of my list.

Moon’s character Paksenarrion was a paladin too, of course. Hommlet sure seemed to draw out the paladins in people. 🙂