We haven’t discussed Thomas Burnett Swann much here at Black Gate (a quick search pops up only one previous title, his 1972 paperback Wolfwinter). He is largely forgotten today.

His second novel, The Weirwoods, was serialized in two parts in Science Fantasy in 1965. It appeared in paperback from Ace Books in 1967 with a cover by Gray Morrow (above left, click for bigger version). The back cover of that edition is in the middle. It is a very slender novel, just 125 pages, with an original cover price of 50 cents. At right is the October 1977 Ace reprint, with a cover by Stephen Hickman.

Swann published some 16 novels, which together constitute a secret history of the magical races of classical mythology, starting in ancient Egypt in roughly 2500 BC, and the inexorable decline of magic in the face of the growth of Christianity and other world religions. The Weirwoods is set in the world of the Etruscans, the pre-Roman civilization that dominated Italy from 800 to 500 B.C., and tells the tale of nobleman Lars Velcha, whose city Sutrium sits beside the mysterious Weirwoods, home to witches, centaurs, fauns, water sprites, and far stranger things. When Velcha captures the weir-man Vel and makes him a slave, he triggers a war that brings disaster to his city. 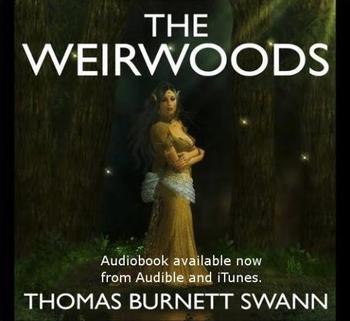 Here’s the description from the inside front cover of the 1967 paperback:

Creature of Magic and Danger

The Etruscan city of Sutrium lay beside a deep forest known only as the Weirwoods — for in its mysterious depths lived the strange beings called the Weir Ones: Centaurs, Water Sprites, Fauns and Panisci. These were half-humans touched with magic, and between them and the Etruscans there was constant fear and distrust.

So when the nobleman Lars Velcha captured a creature of the Weirwoods and made him a slave of his house in Sutrium, he courted disaster. And it was not long in coming, as the Weir Ones massed together behind the spells of a Water Sprite sorceress and attacked the city with the overwhelming savagery of the wildest creatures of Earth’s fantastic dawn.

The Weirdwoods has been out of print since 1977. But John Betancourt of Wildside Press fame released a 5-hour audiobook version narrated by Timothy Patrick Hinkle, which is available through Amazon, Audible.com, iTunes, and other fine outlets. Check out a five-minute sample at YouTube.

Well, speaking as someone who has most of his books (you know how it is), I think he was one of those people who manage to build a lengthy career while not being very good. I’ll say this – his work was distinctive and unique, and I really would love to see his particular perspective furthered by someone who was a better, more disciplined, less sentimental writer. Everyone interested in modern fantasy should give him a try, if just to say that they have. Just be ready for what you’re getting into, that’s all!

I have liked the novels of Thomas Burnett Swann that I have read, and I know that I have a copy of The Weirwoods tucked away, somewhere.
But I also enjoy the Hellenic fantasies of Richard Purtill, sorted into 2 sets, The Kaphtu (Crete) Trilogy (1979-1983): The Golden Gryphon Feather, The Stolen Goddess, and The Mirror of Helen, and The Lost Tales of Kaphtu (written earlier, but only published 2005-2008): The Gryphon Seal, The Eleusinian Gate, and Letter to Nausicaa.

I read, I’m pretty sure, the complete works of Thomas Burnett Swann some years ago. And by and large, I’m in agreement with Thomas.

Basically, he was just good enough, and perhaps more importantly, just distinctive enough — that is, quite different to other writers — that he kept getting published. And his books were very very short.

His novels were fitfully interesting. But, we should also remember that he wrote two great short stories (or novelettes, really): “The Manor of Roses” and “Where is the Bird of Fire?”. By all means seek out those stories. (Both were expanded into much weaker novels (THE TOURNAMENT OF THORNS and LADY OF THE BEES respectively).)

> I also enjoy the Hellenic fantasies of Richard Purtill

Thanks for the rec! I’m not familiar with Purtill, but he sounds well worth tracking down. And perhaps a Vintage Treasures entry of his own!