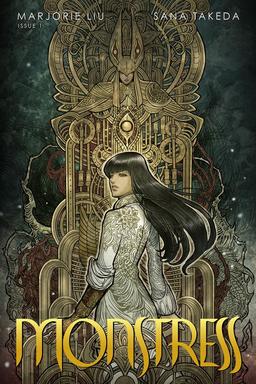 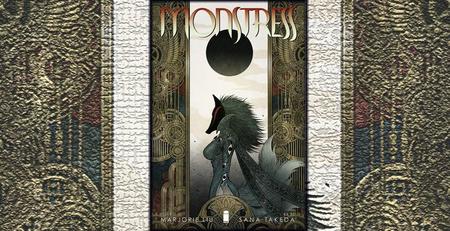 Maika is a former slave, a casualty of a cataclysmic war. She survived, but not without grave physical and mental wounds. I think there are a lot of people who can identify with that.

And the struggle between the two of them — and everyone else — will also be a fight for her own humanity. For her, that’s the main battle. Yes, she’ll be hunted — yes, she may never be accepted — but she has to learn to accept herself first before any of that matters.

After having read the book, I was struck by the dramatic power of your look at the monetization and industrialization of the flesh of the inhabitants of your world. The humans amputate and kill the Arcanics. In your interview with nerdsofcolor.com, you talked about wanting to look at the experience of being othered. Is that what this behavior is, or are you mining a deeper vein of human monstrosity?

People are capable of committing vile, unspeakable acts of cruelty and violence against one another — on an individual scale, against an entire population. We see this again and again — and it’s not confined to the dark ages of history, either. Slavery is alive and well, as is genocide, mass rape — the exploitation of human bodies. 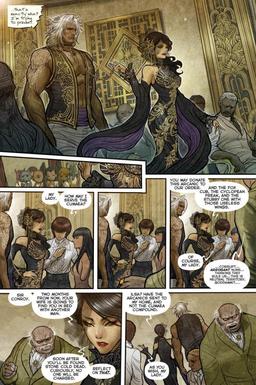 Did I want to address this in Monstress? Absolutely. This is a fundamental question of what it means to be human — specifically, all the ways we dehumanize others.

That said — and this may be hard to believe — I’m fundamentally an optimist when it comes to people. I believe in goodness. I believe that people have as much capacity for love as evil, and that each is expressed in equal measure, in different ways.

Monstress is set in a fantastical Asia you’ve described in terms of “a Paris of the East.” Did you choose this place because it’s inherently fascinating, or does this particular setting have a thematic link to the other and the dehumanization in your story?

I’ve spent almost half my life in Asia — I’m half-Chinese, with family still in China and Taiwan — and it felt natural as breathing to set the story in this alternate world that I’m so in love with.

Asia, frankly, doesn’t get enough love when it comes to the fiction I want to see and read. Most epic “quest” fantasy is Eurocentric, but that’s not even a fourth of what our world represents in terms of the imaginary of its inhabitants. 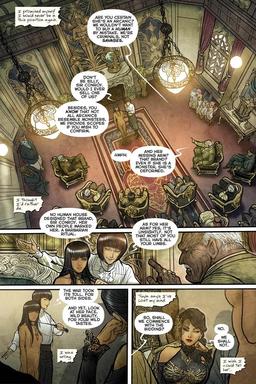 Of course, the other side of this is that WWII was always very much a part of the stories I heard growing up — but it was the war in the Pacific, the war in China, that was passed down to me. It’s another reason why setting a story of cataclysmic war in an alternate Asia was important; to acknowledge, in some way, what happened there.

Monstress is an epic fantasy, that will stretch through fantastical Mongolia, China, Japan and Hong Kong. Epic is usually something that needs the space of a novel. Are you borrowing some of your noveling skills to expand the scope in the comics medium?

You bet! The difference, of course, is with a novel I can go back and fix something if there’s a hole in my plot. With comics, that’s not really possible. So this project is really keeping me on my toes as I try to plot ahead and make sure I’m not overlooking anything.

You told CBR about your love of monsters and your squee over Godzilla. What is it that you love about monsters and how is that feeding the theme you’re building in Monstress? 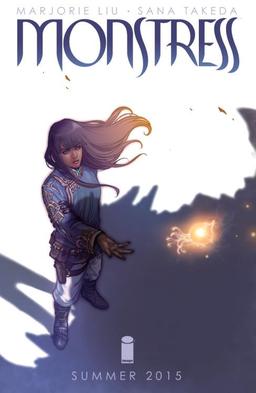 I feel as though I’ve been writing about monsters for my entire professional career. Sympathetic monsters, mostly — monsters who are looking for family, home, belonging, friendship, love. Kindness, more than anything.

As a child I was struck by stories such as Beauty and the Beast and Frankenstein, or other tales where some person — condemned because of his or her outward appearance — is hated, feared.

As a mixed raced kid, as someone who watched her dad deal with racism, that was how I found myself able to talk about those issues even before I knew what they were. It was just so unfair, so wrong, that appearances should matter more than heart, that our humanity might be measured with such a superficial, shallow cup.

And it made me question, from a young age, what a monster is. Who a monster is. What defines monstrosity? Writing Monstress is part of that continuing search for answers.

Thanks so much for the chance to talk, Marjorie. Monstress is a striking work.

Thank you so much!

If you’d like to know more about Marjorie and Monstress, head over to marjorieliu.com!

Derek Kunsken writes science fiction, fantasy and horror in Gatineau, Quebec. He tweets at @derekkunsken. His latest science fiction story will be in the April/May, 2016 issue of Asimov’s Science Fiction (on stands in January-ish).