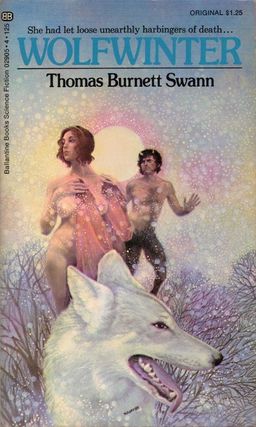 I know almost nothing about Thomas Burnett Swann… other than that he wrote a lot of fantasy novels in the decade between 1966 and 1976, most of them published as paperback originals by DAW. He died of cancer in 1976 at the age of 48, bringing a very promising career to an abrupt end.

Wildside Press has reprinted much of his work as print-on-demand trade paperbacks. But other than their efforts, virtually none of his novels remain in print today.

I didn’t pay much attention to Swann in my formative years, despite that fact that he had numerous novels on the shelves. His work — peopled with satyrs, dryads, and minotaurs — had a classical, almost pastoral, fantasy feel to it, which did nothing to appeal to my hungry-for-adventure teen mind. His fans have done a much better job of summarizing it than I ever could in his Wikipedia entry:

The bulk of Swann’s fantasy fits into a rough chronology that begins in ancient Egypt around 2500 BC and chronicles the steady decline of magic and mythological races such as dryads, centaurs, satyrs, selkies and minotaurs. The coming of more “advanced” civilisations constantly threatens to destroy their pre-industrial world, and they must continually seek refuge wherever they can. They see the advent of Christianity as a major tragedy; the Christians regard magic and mythological beings as evil and seek to destroy the surviving creatures… An undercurrent of sexuality runs through all of these stories. Many of Swann’s characters are sexually adventurous and regard sexual repression as spiritually damaging. Casual and sometimes permanent nudity is common.

Swann is well-regarded as a writer with a fine poetic sense, by those who remember him, and every few years I promise myself I’ll try one of his novels. I haven’t managed it yet, but I did have the chance to buy a copy of one of his harder-to-find books: Wolfwinter, published by Ballantine in 1972.

Her Sybarite husband had instructed the servants to expose the baby for the White Wolves to devour. But Erinna had other plans altogether — and they included finding her satyr and showing him his son. Thus, naive and courageous, she marched determinedly into the world of fauns, sibyls, dryads and the ancient powerful Gods…

I assume Wolfwinter is harder to find because of the rather surprising nudity on the cover, rather than anything to do with the text, but I admit I find the wraparound cover quite striking. For one thing, it’s refreshing to find a woman of such normal curves, rather than another skinny supermodel.

Wolfwinter was published by Ballantine Books in November, 1972. It is 205 pages, originally priced at $1.25. It was never reprinted, and has been out of print for over 40 years. There is no digital edition.

Bless Wildside Press. One day we will all achieve immortality, as long as Wildside keeps publishing the undeservedly obscure.

I’ll definitely keep an eye out for Swann at the Lunacon dealer’s room.

You haven’t read Swann, eh? Well, man up then. He clearly felt deeply about his subject matter and he certainly carved out a unique niche for himself…but by most measures, he was a pretty dreadful writer. It’s hard (for me anyway) to shut off the internal MST3K commentary when I’m reading him.

> I’ll definitely keep an eye out for Swann at the Lunacon dealer’s room.

I haven’t found his early paperbacks to be hard to find, especially his DAW work, so I hope you’ll find a few. I wish I could point you towards his best novels, but that will have to fall to someone more well read than I!

> by most measures, he was a pretty dreadful writer. It’s hard (for me anyway) to shut off the internal MST3K commentary when I’m reading him.

Yeah, I frequently encounter the same thing while reading pulp fiction — as I’m doing now, with some Clark Ashton Smith tales in WONDER STORIES. It helps somehow to read the original pulps… I think it’s easier to be forgiving when you’re holding an 80-year old magazine in your hands, than a collection of reprints published five years ago.

In any event, since you’re obviously more knowledgeable than I, do you have any suggestions for Sarah? What should she keep her eye open for?

If you want the purest draught of Swann, the best thing to read is probably The Day of the Minotaur. I don’t mean to disparage him, but he has always seemed to me to be one of those writers bursting with interesting ideas, who has a distinctive point of view…and who just isn’t in control of his material. After you read Swann, read Avram Davidson’s classical era fantasies, like the Phoenix and the Mirror or the Island Under the World and you’ll see what I mean – the difference is enormous.

I have the same MST3K problem with a lot of Clark Ashton Smith. As long as I can pretend he’s deliberately writing comedy about narrators who lack self-awareness to a magnificent degree, it’s great stuff.

EMC, I’m looking forward to trying Avram Davidson again. My first copy of a volume of Davidson’s short stories arrived in the mail the week my first child was born. I tried reading him during the deservedly-notorious sleep deprivation that comes with a new baby, and it was immediately apparent that Davidson deserved and required more from me than I had right then. That short story collection has been one of the I-can’t-wait-untils of the past several years, and I think this year I’ll finally have enough free attention to bring my best reading game.

Sarah, I’ve definitely found that to be true of Davidson; even when he’s writing seemingly zippy little paperback space operas, his writing is dense – certainly not to be rushed through.