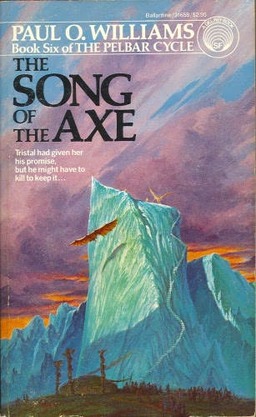 If you read my posts with any kind of regularity, you’ve seen me refer fairly frequently to the same Fantasy and SF classics, whether I’m talking about my own reading habits, or just looking for examples of the topics I’m discussing. So you know that LOTR, Chronicles of Narnia, Leiber’s Fafhrd and Grey Mouser stores, etc., keep turning up.

In part this is because I really love these books and in part it’s because in many instances (as with Star Trek, Star Wars, and The Princess Bride) these works are community property, as it were, and I can be pretty sure that in referring to them, I’m going to a common source that most of you will recognize.

Recently, however, John O’Neill’s post on Emma Bull’s novels reminded me that sometimes you need to talk about books people might not know. It’s in that spirit that I’d like bring to your attention the seven books that form Paul O. Williams’s The Pelbar Cycle, originally published between 1981 and 1985.

Each book is a self-contained adventure (I didn’t read them in order until I had them all and didn’t have a problem with it), but the overall story arc tells of the re-uniting of human groups which became isolated after “the time of fire” and evolved separately into distinct (though recognizable to us) societal types.

If we had to categorize, The Pelbar Cycle is post-apocalyptic SF – there’s a map right at the beginning to let the readers know we’re dealing with the North American continent. If you don’t  happen to notice the map, however, your clues will be few and far between just at first.

Most post-apocalyptic books, starting right with Neville Shute’s On the Beach, deal with the time period shortly after the apocalyptic event, though not all feature the aftermath of nuclear war.

The Pelbar Cycle is one of those rare series in which the time of fire took place so long ago that to many of the surviving peoples it isn’t even a legend.

So the focus isn’t on what happened – and what political situation caused it – but on what’s happening now, and how the Pelbar, the Shumai, the Sentani, and the other “tribes” they encounter in their travels, begin to reunite humankind. 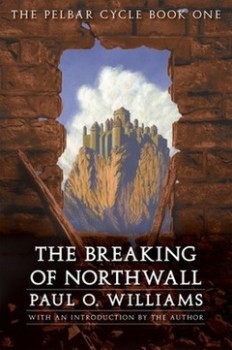 It’s the people, and their personal outlook, that’s of most importance here; it’s Jestak, the first Pelbar to travel beyond the walled settlements of the Heart River, or Tor, Axe Man of the Shumai and who realizes he may be the last of his kind.

Jestak is introduced in The Breaking of Northwall, where, because of his unusual travels, he becomes a catalyst of change for all the people of the Heart. He’s never again the central protagonist of his own novel, but his vision, that all the people were really once the same society, and could be again, precipitates and permeates the events of the entire Cycle.

The problems and complications are many, some social, some personal, but the hope is real.

Are they still in print?

GLENN: I believe they are. When I was looking for images to include, there were quite a few different options, more recent than the ones I have in my collections. I saw that there were also ebook versions.

Another one of those series I remember seeing back in the day, but never quite got around to. Maybe it’ll be time.

And isn’t it interesting how the Apocalypse has changed? These days we see lots of zombies or ecological catastrophe or general societal collapse, but anything where the missiles flew seems stuck in late 1980s at the latest. Or is that just me?

(Which in some ways is kind of a bummer — I do love “dead zones” and mutants in my post-apocalyptic worlds.)

JOE: I was actually going to mention that these days the apocalypse tends to be something natural, or supernatural, rather than political, but that got me off on a whole other tangent, so I left it out.
In the case of the Pelbar Cycle, it’s actually a little bit of both. It doesn’t affect any plotline, so it’s not really a spoiler to tell you that there was a meteor shower which touched off a nuclear event. I think this was a real concern at the time of writing.

Maybe a whole other tangent for a subsequent column? 🙂

I have the whole set, but (of course) have yet to get around to them. Maybe it’s time. I remember Brian Aldiss talked about them in Trillion Year Spree, and thought highly of thme.

[…] Last week I was talking about Paul O. Williams’ The Pelbar Cycle,  which generated a comment about the changing nature of the apocalypse. After all, nowadays we hardly ever see that word without “zombie” in front of it. As my commentator noted, the idea of a nuclear apocalypse largely disappeared after the 1980′s. Perhaps this is a natural outcome of the ending of the Cold War – with the two big nuclear powers no longer at odds with one another, the threat of nuclear war effectively disappeared. […]