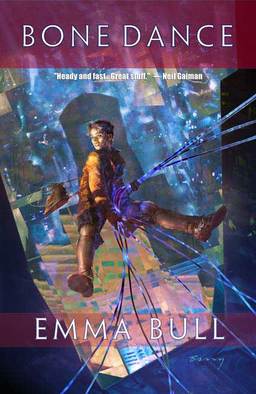 I’m not all that familiar with the fantasy of the 90s. That’s the decade I graduated, got a job, got married, had three kids… and my leisure reading time fell to zero. Things got better after the year 2000 as life settled back into a routine, but when I look back at the major publishing events of that decade, things are still kinda fuzzy.

Fortunately, I’m not the only person working at Black Gate. In fact, I’m surrounded by annoying young people who first discovered fantasy in the 90s, and devoured everything on the shelves. I can’t walk to the water cooler without overhearing them go on and on about the books that first turned them into fantasy fans. And the more I listen, the more I realize that they’re talking about Emma Bull.

Emma Bull is not a prolific writer. Her first novel War for the Oaks made a huge splash in 1987; it was followed by Falcon (1989), Bone Dance (1991), Finder (1994), The Princess and the Lord of Night (1994), Freedom and Necessity (1997, co-written with Steven Brust) and Territory (2007). I finally decided it was time to find out how someone can win over an entire generation with half a dozen fantasy novels, and figured I’d start with Bone Dance.

Sparrow’s my name. Trader. Deal-maker. Hustler, some call me. I work the Night Fair circuit, buying and selling pre-nuke videos from the world before. I know how to get a high price, especially on Big Bang collectibles. But the hottest ticket of all is information on the Horsemen — the mind-control weapons that tilted the balance in the war between the Americas. That’s the prize I’m after.

But it seems I’m having trouble controlling my own mind. The Horsemen are coming.

Bone Dance was nominated for a ridiculous number of awards — the Hugo, Nebula, World Fantasy, Locus, and even the Philip K. Dick Award. It was originally published in paperback by Ace in May, 1991, with a typical 80s art by Jean Pierre Targete, who looked like he was trying to paint Corey Hart on the cover. It was reprinted in a handsome trade paperback edition by Tor/Orb Books on July 7, 2009, and this cover has much more of a YA feel — and a new subtitle: “Fantasy for Technophiles.” Bone Dance is 317 pages, priced at $15.99 in trade paperback, or $7.99 for the digital edition. I bought a discounted trade edition at Amazon for just $6.40 — copies are still available if you act fast.

Such a good, good book, especially for those of us who live in the Twin Cities.

(Strangely, post-apocalyptic Minneapolis/St. Paul is not a widely-used setting for SF books.)

> Strangely, post-apocalyptic Minneapolis/St. Paul is not a widely-used setting for SF books.

Go figure. Maybe this will start a trend?

I keep hoping that someday she’ll come out with annotated versions of both Bone Dance and War for the Oaks, or at least some kind of supplement/travel guides, showing all of the locations she used in the stories. I think I used to live near Eddi McCandry (main character from Oaks), at least based on the streets she used to locate her apartment.

I’m strongly tempted to read WAR FOR THE OAKS next. I still remember how excited some of my friends were by that novel when it first appeared.

I hear a lot about TERRITORY as well. What’s her best book, on your opinion?

I re-read War for the Oaks a few years ago was happy how well it held up. Really one of the best urban fantasies.

One of the best urban fantasies and one (with, say, early Charles de Lint) of the first, from back when urban fantasy meant rock ‘n’ roll elves, not vampire snogging.

For her best, I’d say either War for the Oaks or Territory. Oaks is probably more accessible; Territory is a western with a relatively subtle fantasy subtext, if I remember correctly.

Falcon I think was actually written prior to Oaks (although published after); it’s enjoyable SF but doesn’t quite have the spark. Finder is really, really good but works better in the context of the other Bordertown books.

As “nineties” as it might have been, I think the original cover art for Bone Dance is vastly better than the reprint. It better represents both the tone of the book and the appearance of the main character. Low on the list of priorities for publishers, of course, but it’s worth saying.

I still think War for the Oaks is Bull’s best, but both Bone Dance and Falcon are excellent sci-fi.

> I re-read War for the Oaks a few years ago was happy how well it held up. Really one of the best urban fantasies.

Glad to hear it! I may have to sneak that one on my to-be-read pile as well…

> For her best, I’d say either War for the Oaks or Territory.

I’ve been tempted by TERRITORY, but I’ve also heard lots of complaints that it is only half a book… which I assume means that it ends on a cliffhanger? Is there another book coming, or am I misunderstanding?

> As “nineties” as it might have been, I think the original cover art for Bone Dance is vastly better…

Really? As you’ve read the book, I’ll defer to your expertise. It seems clear to me that the 90s cover was trying to package the book as adult cyberpunk, and the 2009 version is clearly YA, with a much younger Sparrow.

Do you think the modern version is misleading for that reason? Or you just don’t like the way it depicts Sparrow?

John — Good point, although it’s been so long since I read Territory that I honestly can’t remember whether it felt unfinished or not. I know that she did plan on a sequel, but I’m not sure whether it’s still in the cards.

I wouldn’t let that stop you; just go in with your eyes open.

TERRITORY is definitely unfinished. It’s half a novel. A good half, but just half.

BONE DANCE might be her “best”, and it’s very good, but my favorite, even though I recognize it as a structurally very flawed book, is her SF novel FALCON (1989). I adore that book … but I’d agree with people who say it’s not as well-done as many of her others.

[…] however, John O’Neill’s post on Emma Bull’s novels reminded me that sometimes you need to talk about books people might not know. It’s in that […]