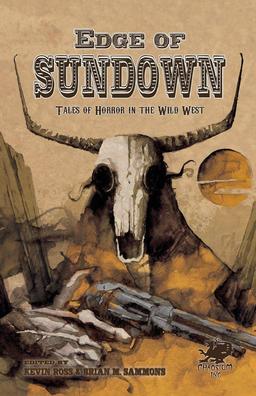 But here’s something new — an original anthology of western horror from Kevin Ross (Dead But Dreaming) and Brian M. Sammons (Tales of Cthulhu Invictus, World War Cthulhu, The Dark Rites of Cthulhu), and published by Chaosium (Call of Cthulhu). Here’s a snippet from the guidelines.

We’re looking for stories set in the American west (west of the Mississippi River) in the latter half of the 19th century, basically from about the Civil War era until the dawn of the 20th century… This is an incredibly rich historical period, full of possibilities for good stories, from real-life heroes and villains to Indians and their legends, cryptozoology, and yes, even opportunities to use elements of the Cthulhu Mythos.

Most importantly, what we’re looking for are good, SCARY stories set in the old west. We’re not looking for tongue-in-cheek works, but ones that take the genre seriously. (Compare, for example, the old Gene Autry serial The Phantom Empire and the more recent western creature-feature The Burrowers.) There can be elements of pulp, fantasy, or adventure, but in the long run the story must have a very strong horror element to it. Other examples of the type of thing we’re looking for would include the serious western (and western horror) fiction of Robert E. Howard, films such as High Plains Drifter, Django the Bastard (AKA The Stranger’s Gundown), and the novel and film The White Buffalo…

With Edge of Sundown our target is very specific, like a bullet straight through the heart: good, serious, scary western horror tales.