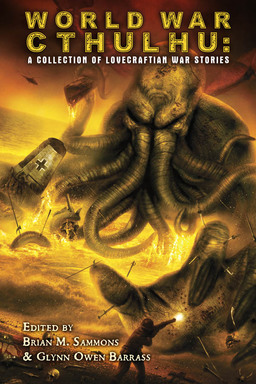 April Moon Books released Brian M. Sammons’s terrific anthology The Dark Rites of Cthulhu back in May, so when I heard word of his newest, World War Cthulhu, edited with Glynn Owen Barrass, I was very intrigued. World War Cthulhu is a huge and ambitious anthology of original Cthulhu Mythos fiction from some of the hottest talents in the field, including Stephen Mark Rainey, Robert M. Price, Neil Baker, C.J. Henderson, Edward Morris, Darrell Schweitzer, Tim Curran, Jeffrey Thomas, and Josh Reynolds. It was funded by a cloud-funding campaign that successfully concluded back in April; the book has now been delivered in multiple formats — including a deluxe format that includes a color plate accompanying each story. Check out some of the fabulous artwork at the Dark Regions Press website.

The world is at war against things that slink and gibber in the darkness, and titans that stride from world to world, sewing madness and death. War has existed in one form or another since the dawn of human civilization, and before then, Elder terrors battled it out across this planet and this known universe in ways unimaginable.

It has always been a losing battle for our side since time began. Incidents like the Innsmouth raid, chronicled by H.P. Lovecraft, mere blips of victory against an insurmountable foe. Still we fight, against these incredible odds, in an unending nightmare, we fight, and why? For victory, for land, for a political ideal? No, mankind fights for survival.

Our authors, John Shirley, Mark Rainey, Wilum Pugmire, William Meikle, Tim Curran, Jeffrey Thomas and many others have gathered here to share war stories from the eternal struggle against the darkness. This book chronicles these desperate battles from across the ages, including Roman Britain, The American Civil War, World War Two, The Vietnam Conflict, and even into the far future.

Note: as far as I can determine, there’s no connection between this anthology and the World War Cthulhu fiction anthology edited by Jonathan Oliver and released in December of last year by Cubicle 7 Entertainment, based on their RPG of the same name. World War Cthulhu: A Collection of Lovecraftian War Stories was published by Dark Regions Press on August 14, 2014. It is 358 pages, priced at $17.95 in trade paperback, and $5.99 for the digital edition.

With this run of Cthulhu coverage the past few weeks, I should write something up on ‘Shadows over Baker Street.’

You should! I’d almost forgotten about that anthology. Did it contain any classics?

Neil Gaiman’s ‘A Study in Emerald’ is probably the best known Holmes short story of the past several decades.

I started re-reading it last week and it’s a mixed bag, but worth getting.

I’ll likely write about it after I’m finished.

And this bunch should definitely like a future post on the anthologies, Gaslight Grimoire, Gaslight Grotesque and Gaslight Arcanum. Creepy stuff.

I recently received this book (had forgot that I contributed to its kickstarter campaign months ago).

For the price, it’s a beautiful, glossy book, full of full-colored illustrations. I’m looking forward to digging into it.

[…] new anthology from Jonathan Oliver (Magic, End of The Road, House of Fear, The End of The Line, World War Cthulhu) brings together brand new stories from an international team of talented authors, each with their […]