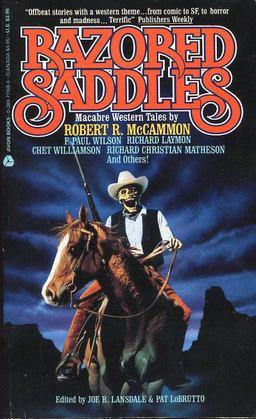 I was at the Windy City Pulp and Paperback convention here in Chicago over the weekend — hands down one of my favorite shows, and absolutely the place where I make my best finds, year after year — and I stumbled across a paperback I’d never seen before.

Now, this really isn’t all that unusual. Last year I found Carl Jacobi’s Revelations in Black, The Bumper Book of Ghost Stories, Stephen E. Fabian’s luscious art book Ladies & Legends, and a bunch more things, just as examples. But I expect to be surprised by odd British books and small print run paperbacks from the 1970s. I don’t expect to discover that a major anthology from the 1990s — from one of the biggest paperback publishers in the country, and edited by no less a personage than Joe R. Lansdale — has completely slipped my radar.

Razored Saddles was originally released in a limited edition hardcover by Dark Harvest in September 1989, and nominated for a World Fantasy Award for Best Anthology. The hardcover is relatively easy to come by, and in fact I’ve seen plenty of them over the years. But the paperback must have come and gone in a flash, because I’ve never come across a copy in over 25 years.

The dealer who was offering it for sale was well aware of its scarcity — he wanted more than I would expect to pay for the limited edition hardcover. Well, I’m loathe to pay more than the cover price of a modern paperback for any vintage paperback, and I didn’t in this case. But I admit I was tempted… Razored Saddles looks like a stellar collection of weird western tales from a Who’s Who of early 90s horror writers, including Neal Barrett, Jr., Robert R. McCammon, David J. Schow, Lewis Shiner, Howard Waldrop, Richard Christian Matheson, F. Paul Wilson, Richard Laymon, and many others. And let’s face it. That cover, with a gun-toting skeletal cowboy mounted against a stark blue sky, very nearly seals the deal.

But instead of spending even more money at the show, I came home and added the Avon edition of Razored Saddles to the list of vintage paperbacks I’m on the hunt for (alongside Clifford D. Simak’s Off-Planet and E F Benson’s The Horror Horn.) We’ll see if I can track down a copy online in the next few months.

In the meantime, here’s a look at the table of contents:

A great anthology. Inexpensive copies are easily available on the Internet.

I think he still lives in Austin, surprisingly.

Michael Moorcock living in Texas and actually resisting the temptation to buy an old paperback are both phenomena that are equally incomprehensible to me.

> A great anthology. Inexpensive copies are easily available on the Internet.

That’s good to hear, Bill. Shortly, one of them will be mine!

I saw this years ago, but had plumb forgotten about it. I understand it includes “a glimpse of Elric”? It is a fantasy collection, a pure western, or something in between?

> Michael Moorcock living in Texas and actually resisting the temptation to buy an
> old paperback are both phenomena that are equally incomprehensible to me.

One has to prioritize at Windy City… you’re SURROUNDED by treasures, and the only way to make it through the day is to pace yourself.

Weird western tales are fairly interesting. When I did the review last year of Dead Man’s Hand

there were several weird stories there, though there were quite a few more steam punk-ish ones if I remember correctly.

A few years ago Chaosium had a Frontier Cthulhu anthology that sounded like western themed horror stories.

I’ll have to pick this one up!

I really liked DEAD MAN’S HAND. I wish there was more like it on the market.

And I don’t remember Frontier Cthulhu… I’ll have to track it down!

There’s an anthology called Tales of the Weird Wild West forthcoming from Danielle Ackley-McPhail that will probably hit the same sweet spots. Keep an eye out for it.