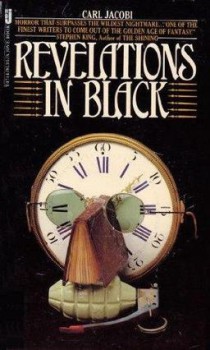 Carl Jacobi is a hard guy to collect.

Part of the problem is that he just didn’t publish many books. Five collections of horror stories in his lifetime. No novels. All of the collections were released through small presses, including Arkham House and Fedogan & Bremer, and only one was reprinted in paperback. Pretty thin pickings, especially if you like paperbacks.

However, the ISFDB listing for Carl Jocobi includes over 120 short stories, three chapbooks, and a poem, among other publications. Guy was certainly prolific enough, even if only a fraction of his output ended up reprinted in more permanent editions. He wrote for most of the major pulps all through the 30s and 40s, including Startling Stories, Wonder Stories, Ghost Stories, Thrilling Wonder, Amazing, and especially Weird Tales.

He was widely respected, too. Stephen King called him “One of the finest writers to come out of the Golden Age of Fantasy,” and his stories were reprinted in numerous SF and fantasy anthologies. They were also translated into French, Swedish, Danish, and Dutch.

On May 6th of this year, the marvelous Centipede Press released Masters of the Weird Tale: Carl Jacobi, the latest volume in their deluxe Masters of the Weird Tale series. Clocking in at 900 pages, with new and reprint art and lots of photos, it’s the definitive collection of Jacobi’s fiction. It’s also $350 retail. Considering that I recently bought a vintage collection of some 1,000 SF and fantasy paperbacks in nearly new condition for about a third that price, let’s just say that spending $350 on a single book is not a good option for me, and move on.

Of course, you know where that leaves us. The same place we usually end up: searching eBay and used bookstores for paperbacks. In this case, one particular paperback: Revelations in Black, Jacobi’s very first collection (from 1947; reprinted by Jove in 1979), and the only one ever reprinted in paperback.

I’ve had my eye out for this one for a while. I glimpsed a copy not that long ago, at the Windy City Pulp and Paper show here in Chicago, but it was priced at $14, and you know how loathe I am to pay more than about the cost of a new paperback for anything. I knew I could find it for a better price if I was patient, and so I was.

And I did. No surprise, I found a copy as part of a small collection of vintage paperbacks on eBay, selling for $25, or about $2.30 per book. Considering that the set included Night Fear by Frank Belknap Long, the Sam Moskowitz anthology Horrors Unknown, and Anthony Boucher’s The Compleat Werewolf, it was an obvious bargain, and I snatched it up.

I now have my first Carl Jacobi book, and I hope it won’t be my last. I plan to settle down this long weekend and enjoy it. Here’s the text from the back of the 1979 paperback edition:

The King and the Knave

It was the oldest deck in the world. It had neither hearts nor diamonds, clubs nor spades, and the winning suit was death.

The creature was alive. Its exquisite feminine face had long blonde hair which trailed in the water. But was it human?

The machine was the greatest invention ever made. Only one thing was required for its completion… the living heart of the one he loved.

The last Monarchy had passed into limbo, It was forbidden to enter the secret place. But Kramer turned the key and the door swung open to reveal… the horror beyond the Void!

Oddly, that count in the last line is very incorrect. There are a total of 21 stories in Revelations in Black, not 13. Both the Arkham House edition and the Jove paperback have the same table of contents.

Over in the UK, Jacobi’s Revelations in Black was published in 1977 by Panther. I picked up a copy some years later. However, true to the publishing strategies of the time, only half the contents you list are in this paperback. All the stories you list from and including The Tomb from Beyond are missing. Having scanned the AbeBooks site, there is another Panther volume called The Tomb from Beyond. Won’t be buying it though – ships from Australia to UK and is way too expensive. I second the call for a reasonable Wordsworth edition. Jacobi was a fine writer and does not deserve oblivion.

According to the Centipede page I linked above, Wildside Press currently has the rights to Jacobi’s work. However, I can’t find any Jacobi titles published by Wildside, either on their site or on Amazon.

> Over in the UK, Jacobi’s Revelations in Black was published in 1977 by Panther. I picked up a copy some years later. However, true to the publishing strategies of the time, only half the contents you list are in this paperback.

Thanks for the info. I noticed the Panther edition listed at ISFDB; I hadn’t realized it was so incomplete.

There’s an odd inconsistency with the US paperback. You’ll note the back cover text advertises four stories plus “nine more powerful tales by the master of the fantastic.” So I opened it expecting 13 short stories.

Nope. There are 21 within, the same number as the 1947 Arkham House edition. Not sure why the back cover has it wrong… one of many mysteries lost to history, I suppose.