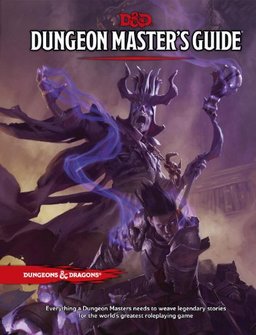 Truthfully, everything you really need to play is contained in the core rules, barely 25 pages of the Players Handbook (one of the reasons I think the new edition has been such a hit), but players have been waiting anxiously to complete the Fifth Edition rules set and enjoy the full scope of the game. The DMG contains magic items, optional rules, advice for Dungeon Masters, and a lot more.

The Fifth Edition Dungeons & Dragons Starter Set was published July 15, 2014; Andrew Zimmerman Jones did a forensic analysis for us here. The Players Handbook was released on August 19; Andrew reviewed it for us a few days later. The Monster Manual arrived September 30; Andrew was all over it the day before it came out. I was going to review this one, but I’m pretty sure Andrew will beat me to it.

Why wait two months to publish the DMG? No idea, but there’s probably some kind of marketing strategy behind it. The tradition of publishing D&D rules sets in three volumes goes all the way back to Gary Gygax, and he took two years to produce all three (the first Players Handbook was published in 1977; the DMG didn’t show up until 1979.) So I guess we should consider ourselves lucky it’s showing up now, instead of 2016.

Everything a Dungeon Master needs to weave legendary stories for the world’s greatest roleplaying game.

The Dungeon Master’s Guide provides the inspiration and the guidance you need to spark your imagination and create worlds of adventure for your players to explore and enjoy. Inside you’ll find world-building tools, tips and tricks for creating memorable dungeons and adventures, optional game rules, hundreds of classic D&D magic items, and much more!

The Dungeons and Dragons Dungeon Master’s Guide was written by the Wizards RPG Team, and will be published by Wizards of the Coast on December 9, 2014. It is 320 pages, priced at $49.95 in hardcover. There is no digital edition. Get more details at the WotC website.

Not to be pedantic, but the original PHB first appeared in ’78. It was the Monster Manual that arrived in 1977, making it the first “advanced” book.

Right you are! I always forget that, because I bought the PH first. 🙂

Hmmm, so releasing the Monster Manual in advance of everything else carries on a venerable tradition.

It is odd, though, isn’t it? I mean, to put out a book full of monsters with stats for rules that nobody has yet?

Rules-wise, the 1977 Monster Manual pretty much uses OD&D + Supplements. In fact, if you look closely at it, you’ll find a number of rules oddities that only make sense if you consider it was written for the Little Brown Books rather than for AD&D (which, as you say, didn’t actually exist yet).