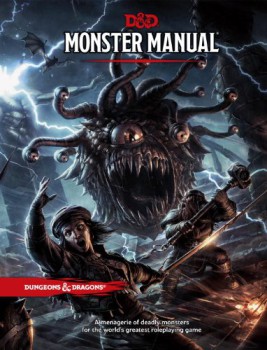 A fantasy roleplaying game is defined as much by the caliber of the villains and monsters as it is by the caliber of the players and heroes. Though Dungeons & Dragons has always been driven primarily by the imagination of the Dungeon Master and the players, the fact is that you can usually get only so far with just the Player’s Handbook (Amazon). It has the basic rules mechanics for playing the game, but lacks the array of exotic monsters necessary to populate – and threaten – the fantasy world that the characters are exploring.

With the arrival of the new 5th edition D&D Monster Manual (Amazon), that gap has now been alleviated. This book contains a beautifully-illustrated 350 pages of monsters, adversaries, and maybe even a few allies to introduce flawlessly into 5th edition games. The name really says it all; it is a manual full of monsters. There’s an appendix of “Miscellaneous Creatures” and one of “Nonplayer Characters” which are also useful, but there is one stand-out mechanic introduced that is worth mentioning in its own right, for those who might be wondering if the book is worth picking up.

The manual contains a class of “Legendary Creatures” which “can take special actions outside their turns, and a few can exert power over their environments, causing extraordinary magical effects to occur in their vicinity.” In addition to these “legendary actions,” legendary creatures also sometimes come along with a lair, which gives the legendary creature ability to take extra “lair actions” and may have ambient powers, representing how the legendary creature’s power has physically warped the terrain of the lair.

Ancient and adult dragons get legendary actions and have lairs that provide benefits. So if you’re fighting an ancient green dragon within its lair, in addition to the normal combat with the dragon (and its out-of-turn legendary actions, such as tail and wing attacks), the intrepid dragon-hunters also have to deal with the lair itself trying to ensnare them with vines and roots.

As another example, the legendary “Mummy Lord” gets 3 legendary actions each turn, allowing for extra attacks or blinding dust, or more powerful effects (costing 2 legendary actions each) of Blasphemous Word stun attack, Channel Negative Energy, or Whirlwind of Sand. The Mummy Lord’s lair has one of three regional effects, such as food instantly molding, water evaporating, and wine turning to vinegar upon entering the lair, divination spells going awry, or the classic cursed treasure. And within the lair, the Mummy Lord gets a once-a-turn action that either benefits any undead in the lair or potentially harms any non-undead spellcasters. So in addition to the Mummy Lord’s normal 2 attacks during its turn (a “Rotting Fist” and “Dreadful Glare” attack), it can get as many as three extra attacks during other characters’ turns, the lair itself works against you, and it can provide bonuses to all undead allies in the lair!

In other words: You do not want to attack a legendary creature within its lair.

This is, frankly, a brilliant mechanic that is presented exceptionally well. These extra abilities provide a nice boost to boss-level encounters, but are not so overpowering that the characters can’t anticipate them and compensate for them with some additional preparation. The flexibility also gives you the possibility of using the same legendary creatures in different situations, but having the encounters feel different because of the flexibility in how their lairs manifest.

For Dungeon Masters looking for more direction on how to guide their 5th edition game, there is also the adventure Hoard of the Dragon Queen (Amazon). In the wake of the Sundering – the world-shattering event spanning their last year of D&D novels – the Forgotten Realms are in disarray, and the Cult of the Dragon is looking to take advantage of that to free the evil dragon goddess Tiamat from her imprisonment in the Nine Hells. Across Faerun, evil dragons united with the cult are seeking to amass a hoard of wealth to offer to Tiamat upon her return, a plan which marks the first step in the Tyranny of Dragons storyline.

The adventure begun in Hoard of the Dragon Queen culminates in the adventure The Rise of Tiamat (Amazon), due for release in October.

Disclaimer: Review copy of D&D Monster Manual was provided by the publisher.

[…] all, right? One of the jobs of the Dungeon Master is to find ways to keep things interesting. As I said in a post last week, ”A fantasy roleplaying game is defined as much by the caliber of the villains and monsters […]