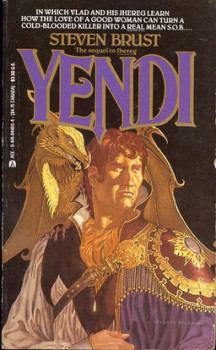 Steven Brust has written that Yendi (1984), second in his ongoing series about gangster Vlad Taltos, is his least favorite book. As it’s only the second of his novels I’ve read, I can’t tell you where it falls on a greater continuum of his work, but I can tell you it’s a pretty good book. Sure, the book is flawed, but the good bits far outweigh the bad. If this is the low point in the series, then I’m REALLY looking forward to the later volumes.

The first book in the series, Jhereg (read my review here), introduces Vlad Taltos, a human assassin in a magic-heavy world ruled by the Dragaerans (who are pretty much elves). In that book, Vlad finds himself forced into carrying out a complex assassination. Aided by his mini-dragon familiar, Loiosh, and several powerful and clever friends, he succeeds beyond his own expectations. It’s a blast and I’m grateful to Bill Ward for getting me to check it out.

Instead of taking the story forward, Brust goes back in time with Yendi. Here we learn how Vlad rose in the ranks of the mafia-like House Jhereg. By a combination of smarts, daring, and just enough violence, he secures a position in the gangland ecology of the Dragaeran Empire’s capital city, Adrilankha. By book’s end, he’s well on his way to becoming the successful racketeer we meet in the first book. Unfortunately for him, things happen between the beginning and end of Yendi that make for a lousy time for Vlad, but a fast-paced story for us.

The book begins with Vlad learning that another low-level boss, a Dragaeran named Laris, has opened a gaming parlor in his territory. When confronted, Laris is apologetic and presents a series of nearly believable excuses. After the meeting, Vlad informs his lieutenant, Kragar, that they have probably no more than two days to get ready for an all-out war. His intuition proves correct.

The war between Vlad and Laris is so violent that one of the five rulers of House Jhereg summons Vlad and tells him to handle his war with more subtlety, or else. Unfortunately, it’s too late to avoid the or else. Incensed by the steady string of fires and killings, the Dragaeran empress dispatches members of her Phoenix Guard to clamp down. There are curfews, restrictions on the size of gatherings, and all criminal operations are shut down.

The war shifts from arson to assassination. The third, and fatal, attempt on Vlad’s life comes at the hands of the Sword of the Jhereg and the Dagger of the Jhereg, a pair of female killers, one Dragaeran and one human. Only the timely intervention of his powerful Dragaeran friends Aliera and Morrolan keeps Vlad’s death from being irrevocable. In the world of Dragaera if the deceased’s head is intact and the rest of his body isn’t too damaged, he can be revived after death. Aliera, a powerful healer, is able to bring Vlad back to life.

It’s at that point that the book becomes something much more than just another gang war with magic. The two killers hired to do away with Vlad are taken prisoner by Morrolan and Aliera. The Sword of the Jhereg, it seems, is an outcast from the House of the Dragon and quite possibly the legitimate heir to the imperial throne. Centuries ago, she was stripped of her rights of inheritance in a deep and complex plot.

Brust’s style requires — no, demands — the reader’s attention in order to follow the plot. This is beautifully on display during the second half of Yendi, as Vlad works to unravel the mystery behind the Sword’s lost inheritance. Brust assumes his reader to be up to the task of following him wherever he leads, without stopping for more than a sentence or two of explanation every now and then. I love it when a writer is willing to let me sink or swim.

Brust’s Vlad Taltos oozes the tough guy style you want in a protagonist of this sort of story. Faced with one of House Jhereg’s lords, Vlad handles it like this:

The big shot stood there staring at me. I was supposed to get nervous, I guess. After a while I yawned. He glared.

I shrugged. This guy, whoever he was, could snap his fingers and have me killed. But I wasn’t about to kiss his ass; my life isn’t worth that much.

He pulled a chair out with a foot, sat in it. “So you’re a hardcase.” he said. “I’m convinced. You’ve impressed me. Now, you wanna live, or not?”

“I wouldn’t mind.” I admitted.

Of course, there’s more of the phenomenal world building that especially impressed me in Jhereg. We learn more of the complex rules and customs that govern the Dragaeran. For example, as members of the House of the Dragon, Vlad’s friends Morrolan and Aliera have to be circumspect in how they help a member of the criminal House Jhereg. Only those born while an actual phoenix flies overhead are deemed members of House Phoenix, so there aren’t many of them. There’s a great joke about the devious House Yendi:

“Morrolan, how many Yendi does it take to sharpen a sword?”

He looked at me through slitted eyes. “Tell me,” he said.

“Three. One to sharpen the sword, and one to confuse the issue.”

The only other hardboiled fantasy I’m familiar with is Glen Cook’s Garrett series. Brust’s are similar in style, but a little darker and richer in tone. There’s a conversation between Vlad and another human, where he lays bare his past grief and misery as a member of a dismissed, and often despised, minority. Without ever sounding like a tract, Brust raises questions of racial collaboration and racial identity.

Now for the flaw. The story doesn’t really amount to that much. The mystery is interesting but doesn’t really affect Vlad or even need to involve him. Vlad and his band of friends and associates are fun to hang out with, but there’s just not that much riding on the puzzle surrounding the Sword of the Jhereg.

Maybe that’s the point Brust is making: the life and ambitions of a human in a Dragaeran world are never going to matter that much. For all the danger and loss of property and comrades Vlad’s subjected to, it means something only to him. The problem is, since Vlad’s telling the whole story, I’m caught up with him and, like him, I’m just sort of a spectator at the end. It’s distant and uninvolving.

There are few other weaknesses. Vlad’s romance with the Dagger of the Jhereg commences with the speed of cinema. Too much of the end is taken up with a long conversation about what’s going on. It reads a little like the denouement of an Agatha Christie novel, with its too many hidden parts. All those good things I wrote about Brust letting the reader sink or swim get pushed out to sea a little bit.

So, yeah, Yendi isn’t a perfect book. But it is a perfectly good book that doesn’t do a disservice to its hero or the complex and fascinating world its author created. I’m looking forward to the next ones with high expectations. The fourteenth Vlad Taltos book, Hawk, is coming out early next month.

I read the first…four(?) of this series when I was in graduate school. I’ve been thinking I need to reread them. They were a lot of fun.

I have October 7. the release date of “Hawk,” circled on my calendar. It’s been too long since the last Vlad Taltos adventure.

I’m really curious as to how they evolve as the gangster stuff starts to fade into the background.

I enjoyed some of the installments more than others. While I appreciate an author experimenting with style and narrative technique, what I really wanted was my fix of first person smart-ass. Opinions will differ.

[…] recommend The Book of Jhereg, a paperback omnibus collection of the first three novels (Jhereg, Yendi, and Teckla), which has been in print from Ace for over 15 […]