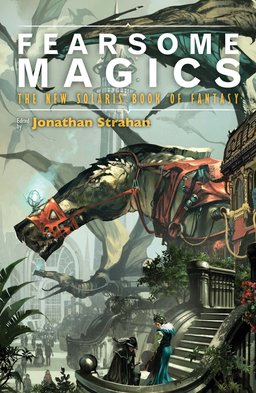 Next week sees the arrival of Jonathan Strahan’s Fearsome Magics, his second volume of original fantasy fiction from Solaris. Here’s what James McGlothlin said about the first, Fearsome Journeys:

Glenn Cook provides another great tale of the Black Company, his popular fantasy military troop, with his story “Shaggy Dog Bridge.” Similar to Cook’s Black Company, Scott Lynch’s “The Effigy Engine” centers upon a group of (wizard) warriors called the Red Hats, who are battled-hardened cynics often attempting to just get by. This was a very interesting tale describing war contraptions that reminded me of medieval versions of the AT-AT Walkers from The Empire Strikes Back. Very cool!…

A cabinet of magic! A cavalcade of wonder! A collection of stories both strange and wondrous, of tales filled with wild adventure and strange imaginings. Fearsome Magics, the second New Solaris Book of Fantasy, is all these things and more. It is, we think, one of the best books you will read all year.

Fearsome Magics is edited by Jonathan Strahan and published by Solaris Books. It will be published on October 7, 2014. It is 352 pages, priced at $7.99.

I haven’t had a chance to read FEARSOME JOURNEYS yet, but overall I really liked FEARSOME MAGICS. (I was able to get an eARC from Solaris, thanks be to them.) While I would have liked a little more sword and sorcery, there was quite a bit of variety. And one of my favorite stories really wasn’t fantasy at all but dealt with stage magic.

I’ve gotten to the point where I pick up pretty much any anthology that Strahan is involved with. Our tastes aren’t identical, but they overlap enough to know that at the very worst I’ll enjoy whatever he puts together and at the very best, the book will probably be one of my favorites of the year.

Here are my thoughts on FEARSOME MAGICS, for what they’re worth: http://adventuresfantastic.com/a-review-of-fearsome-magics/

I do the same. I tend to buy anthologies on the strength of the editors’ past anthologies. Strahan is a favorite, as well as John Joseph Adams. ANYTHING by Datlow is a must-have. She has several new anthologies coming out in the upcoming days.

BTW, I read Fearsome Journeys and loved it. For what it’s worth, my review is here:

That’s an informative review. I remember reading it when you posted, but it was good to refresh my memory. FEARSOME JOURNEYS is definitely on my must-read. It will probably be a few weeks before I can get to it.

[…] Back in September, I told you about Jonathan Strahan’s newest fantasy collection Fearsome Magics: The New Solaris Book of Fantasy, the follow-up to his acclaimed Fearsome Journeys. Fearsome Magics has a stellar list of contributors, including Ellen Klages, Robert Shearman, Nina Kiriki Hoffman, Tony Ballantyne, and many more. I’m too lazy to copy over the complete list and the back copy text from my prior post, but you can read them here. […]

[…] A while back, I praised Solaris Books for their impressive line of top-notch original anthologies, including Ian Whates’s Solaris Rising, and Jonathan Strahan’s Reach for Infinity. And just a few hours ago (see below), I reported on their upcoming fantasy volume, Fearsome Magics. […]