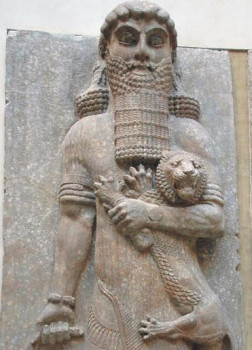 As far as heroes go, Gilgamesh leaves a lot to be desired, at least by modern standards. Gilgamesh is not a good guy. Or a good man. Or a good king.

That is in fact how the story begins. Gilgamesh is an impressive specimen, it’s true.

“Supreme over other kings, lordly in appearance,
he is the hero, born of Uruk, the goring wild bull.
He walks out in front, the leader,
and walks at the rear, trusted by his companions.
Mighty net, protector of his people,
raging flood-wave who destroys even walls of stone!
Offspring of Lugalbanda, Gilgamesh is strong to perfection,
son of the august cow, Rimat-Ninsun;
… Gilgamesh is awesome to perfection.”

Gilgamesh is two-thirds divine and one-third human. We’re not entirely certain how that math works out: we know his mother is the goddess Ninsun and if I had to guess I would say that they considered the mother’s contribution to a child’s makeup as more weighty than a father’s. (As opposed to the Greeks, who considered the mother to be merely a biological caretaker of an implanted seed.) He’s a powerful leader, he defends his people, so what’s the problem?

He isn’t popular with anyone. So the people of Uruk complain loud and long to the gods to do something. They don’t ask to be rid of Gilgamesh: they just want him to cut it out. So the gods’ response is to make him a man. Not like Charles Atlas, that is: the king of the gods Anu asks Aruru, the sculptor who created humans in the first place, to create a match for Gilgamesh.

Her answer is Enkidu.

I love this. Because in the most ancient epic ever written, the answer to a complete bastard of a king isn’t revolution or overthrow. It’s to get him a bestie. A brother from another mother. It’s the original Epic Bromance. Brosephs and their amazing adventures.

This is the birth of not one, but two tropes: the excessively Alpha leader who needs to grow into true adulthood and responsibility, and the best friend. These are our most ancient recorded story types.

Don’t get me wrong, I love romance. Quite a bit. I think the romance genre is both underrated and under-read by a lot of writers in other genres. I love shipping characters on my favorite shows. I love romance subplots. But in modern literature and, most especially, in modern fandom, romance often comes at the expense of friendship. This is sad, because frankly, friendships are for many of us the more important and lasting relationships in our lives. Even in a lasting sexual relationship, the aspect of romance is nothing compared to a vital friendship between partners.

And in this, our first epic, the incentive for Gilgamesh’s character development and the impetus for his journey comes not from the right woman, but from a best friend.

Next time, we’ll learn all about that friend: Enkidu, the original wild man.

I’m not an expert on ancient history; but my limited knowledge knows of very few examples of ancient kings who would count as either a good king or a good man by today’s standards.

I think there aren’t many kings since that would count as good men or good kings by any standard. That thing about power and corruption rings true.

Perhaps there aren’t many people that actually pass any standard of goodness as well, and monarchs are just a subset.

“For there were Giants in the Earth in those days – and after, when the Sons of the Gods came down unto the Daughters of Men. They were the Heroes of Old, Mighty Men of renown.”

It’s pretty obvious that thousands of years ago we were interfered with in some way that gave us a boost in evolution/technology. Difference between flint spear 1.0 and 2.0, 50,000 years… Then almost overnight hunter gatherers with limited agriculture (plant crops for when they return to area) have cities.

I’m reading Gilgamesh with a student right now. The best question on her question list was, “How can Gilgamesh be perfect to the gods but inasequate to his fellow humans?” Her thesis for her papr is that Sin-leqe-unini was writing in deliberate criticism of Gilgamesh, but feared to get in religious or political trouble. “Like in Chinese newspapers,” she added. That’s going to be a fun paper.

Do you have a favorite translation? We’ve got three of them in play, and we’re often perplexed by passages present in one text but absent in the others.