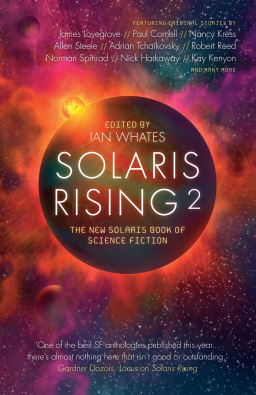 You know it’s true. The question is, what are you going to do about it?

I have a suggestion (I know — when do I not?) You should read Solaris Rising 2: The New Solaris Book of Science Fiction.

Solaris has been a fast-rising brand in science fiction and fantasy for the past six years, since they were founded in 2007. Just in the past few weeks, we’ve covered several recent titles of note, including Juliet E. McKenna’s Dangerous Waters and The Good The Bad and the Infernal by Guy Adams. See? These guys are serious.

They’re serious about great short fiction, too. They started with three annual volumes of The Solaris Book Of New Science Fiction, edited by George Mann and published between 2007 and 2009. They relaunched the series last year as Solaris Rising, under new editor Ian Whates, and the book was a significant critical success.

Editor Ian Whates is no newbie to SF and fantasy. His novels City of Dreams & Nightmare and City of Hope & Despair were published by Angry Robot and The Noise Within and The Noise Revealed were released by Solaris. You should take advantage of expertise like that, and let him guide you to some quality fiction.

Solaris Rising 2: The New Solaris Book of Science Fiction was published by Solaris Books on March 26. It is 448 pages, priced at $8.99 in paperback. There is no digital edition.

Actually, *my* problem is that I read too much short fiction–and how could it be any different with subs to F&SF, Analog, and Asimov’s, not to mention many other mags that have come and gone (including Black Gate, which I was a subscriber to from the very first issue)–so I don’t have nearly enough time to read longer form fiction.

All BLACK GATE subscribers are automatically exempt from criticism that they’re not reading enough short fiction. 🙂

[…] The Solaris Book Of New Science Fiction, which last three volumes, only to be reborn as Solaris Rising: The New Solaris Book of Science Fiction under new editor Ian Whates (two volumes so far). In May of this year they finally showed fantasy […]

[…] short fiction has appeared in Solaris Rising 2, Best Horror of the Year, Volume 1, and Cthulhu’s Reign, among other places. He was a Nebula […]

[…] by Ian Whates, who proved his editorial acumen with the fine SF anthologies Solaris Rising and Solaris Rising 2, and will be published by NewCon Press in the […]

[…] Books for their impressive line of top-notch original anthologies, including Ian Whates’ Solaris Rising, and Jonathan Strahan’s Reach for Infinity. And just a few hours ago (see below), I reported […]