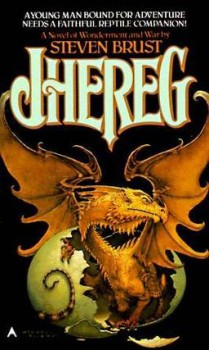 I’m always excited to find a new author, especially one with a long back catalogue for me to plunge into. With 26 novels to his name, Steven Brust is one of those finds.

When I first started blogging about swords & sorcery I spent some time looking around for newer books and series (newer for me meaning anything written after 1984). Again and again, people suggested Steven Brust’s Dragaeran Empire series. Without reading too much about it I learned the main protagonist, Vlad Taltos, had a little pet dragon. Right away my brain flashed some kind of warning and, fearing the books might be too cute by half, I rejected them.

Well, a few weeks ago Bill Ward wrote very highly of the adventures of Vlad Taltos. I figured why not? For a penny (plus $3.99 shipping) I ordered The Book of Jhereg (1999), an omnibus containing the series’ first three books: Jhereg, Yendi, and Teckla. Though still apprehensive of the little dragon, I started on Jhereg (1983) and blew through it in two days. Well I’m feeling a little foolish now for not having overcome my dracophobia much sooner.

The Dragaerans are nearly immortal, seven foot tall beings with slightly pointed ears and more finely featured than humans. Their society is divided into seventeen houses, each with its own traits and skills. Humans are a small and disfavored minority. The human Vlad Taltos is an assassin in House Jhereg, the Dragaeran equivalent of the mafia.

Other houses of note are the Dzur and the Dragons. The former are bold warriors who thrive on great challenges, preferably ones where the the odds are against them. The latter are among the nobler of the Drageaeran houses, and from their ranks come the imperial guard and most of the empire’s generals.

Jhereg is sort of a crime/mystery story. But rather than solve a crime, Vlad must figure out how to perpetrate one. A ranking member of House Jhereg has stolen a huge amount of Jhereg money and taken off for parts unknown. As a warning to imitators the heads of the house want the thief dead as soon as possible. Since Vlad’s not only a member of the house but one of the best assassins in the empire, he’s hired to carry out the killing. 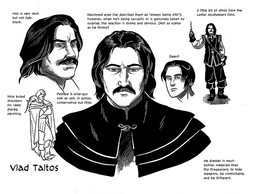 Before Vlad can kill the thief he needs to find him. The thief has gotten himself invited into the House of the Dragon’s floating castle. Because of a long-ago war between the Jhereg and Dragons that left both nearly exterminated, the castle is considered inviolate. The thief seems to have an impenetrable shield in his host’s obligations to his guest. If another bloody war with the Dragons is to be avoided, Vlad must find a way to accomplish his mission without inciting the Dragons and before the Jhereg bosses lose patience.

Jhereg reads like a fantastic and slightly off-kilter version of a Golden Age crime story. The focus is on Vlad’s ingenuity and the puzzle of how to kill the thief. That plus the witty banter, snarky sidekicks, and some action here and there kept me captivated.

Even though the book’s main character is a criminal in the service of organized crime, Jhereg‘s a fairly light story. The only murders are of criminals who fell afoul of their code of honor or tried to muscle in on someone else’s racket. When violence happens it’s not really graphic and definitely not gory. And as most deaths in Dragaera aren’t permanent (since resurrection is commonplace) there’s less at stake, which further lightens the overall tone of the book. It’s so light that I was never bothered that I was rooting for a killer to succeed.

The greatest depth in Jhereg is Brust’s worldbuilding. Dragaera started as a gaming world in which Brust played the character of Vlad Taltos. When he decided to write about Taltos he started with the characters and the world which he and his friends had created and developed it into a completely engaging, swashbuckling world full of power and intrigue and fun. He does a great job of revealing the socioeconomics and history of Dragaera through Vlad’s narration. It never feels labored and always serves to move the quick-paced plot forward. In the book’s mere 239 pages there’s a vast world on display. And still, it’s never overwhelming and there’s enough just hinted at to make me want to read subsequent books to find out more.

With the Dragaerans being nearly immortal and reincarnation another fact of life, there are characters walking around with centuries and even millenia of knowledge and grudges in their heads. These are fascinating ideas to play with and a little mind-blowing as Vlad makes clear when he learns something unexpected:

Aliera nodded. “Seethra was there, as Seethra. I’ve heard her age given at ten thousand years. Well, that’s wrong. It’s off by a factor of twenty. She is, quite literally, older than the Empire.”
“Aliera, that’s impossible! Two hundred thousand years? That’s ridiculous!”
“Tell it to Dzur Mountain.”

Despite the book’s general breeziness, there is an element of darkness that peeks through the shiny surfaces. Humans, even successful ones like Vlad, are looked down on by most of Dragaeran society. Vlad’s memories of his father’s struggle to sever his human heritage and buy his Dragaeran citizenship expose a bitter core hidden inside Vlad. I’m curious where Brust goes with this in the future novels. Racism in fantasy is rarely explored much beyond dwarves hate elves and everybody hates orcs.

Brust is known for something he’s called the “The Cool Stuff Theory of Literature.” He’s presented it in several slightly different ways, but my favorite comes from an interview he did in The Dragon in 1995.

What I do is write stuff that I think is cool, which is what every good writer does. A hack will write what he thinks will sell. A good writer will write stuff that he thinks is cool, to the best of his ability. There are a lot of things I think are cool. And cloaks and swords — rapiers in particular — are definitely on the list. That doesn’t mean every book has them, but that’s what I gravitate toward.

Doing a little research about Brust, I wasn’t surprised to learn that Alexandre Dumas is one of his favorite authors. If you think you’re in sync with what Brust finds cool (as I do), Jhereg’s pretty dang cool. Vlad’s a sharp and funny narrator and Brust’s clean writing helps make him one of the more believably intelligent rogues in fantasy.

Oh, and the pet dragon (actually Vlad’s familiar), Loiosh, is fairly cool and as capable of sharp retorts to Vlad as any of his other cohorts.

Lucky you, you have a lot of fun reading ahead of you. Don’t forget the “Phoenix Guard” books for the full Dumas effect.

Ah, you reviewed this so quickly! As Ken says, you’ve got a lot of fun reading ahead. In keeping with Brust’s ‘cool stuff’ approach, I’m really impressed with how fresh he keeps the Vlad Taltos series, they never become formulaic in the slightest.

@K Lizzi & B Ward – I was surprised how much of a kick I got out of this one and how quick a read it was. It’s his first book and the writing just races. The closest thing in tone/style it brings to mind is Glen Cook’s Garrett but those really started becoming kind of pointless after the sixth or seventh book.

I think Brust actually lives right down the street from me. Maybe not literally, but he’s somewhere in the neighborhood.

And I really do need to get caught up with Vlad one of these days.

[…] first book in the series, Jhereg (read my review here), introduces Vlad Taltos, a human assassin in a magic-heavy world ruled by the Dragaerans (who are […]

[…] novel in the adventure fantasy series that began with Jhereg (reviewed by Fletcher Vredenburgh here) way back in 1983. A total of 19 are planned; the last one was Tiassa (2011), and the next is […]