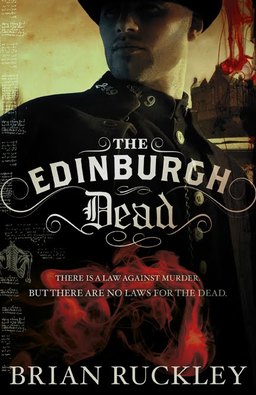 The first time I encountered Brian Ruckley, he impressed me greatly. It was with his long story “Beyond the Reach of His Gods,” in Jason Waltz’s groundbreaking anthology Rage of the Behemoth. Since then, he’s proved that wasn’t a fluke with The Godless World trilogy (Winterbirth, Bloodheir, and Fall of Thanes), a satisfying rich heroic fantasy of an apocalyptic war in a godless winter landscape.

But it was his dark fantasy set in the Scottish capital that really grabbed my attention. A gothic tale of devilry and detective work, it looks like it could be a breakout success for this heroic fantasy writer.

Edinburgh: 1828. In the starkly-lit operating theaters of the city, grisly experiments are being carried out on corpses in the name of medical science. But elsewhere, there are those experimenting with more sinister forces.

Amongst the crowded, sprawling tenements of the labyrinthine Old Town, a body is found, its neck torn to pieces. Charged with investigating the murder is Adam Quire, Officer of the newly-formed Edinburgh Police. The trail will lead him into the deepest reaches of the city’s criminal underclass, and to the highest echelons of the filthy rich.

Soon Quire will discover that a darkness is crawling through this city of enlightenment — and no one is safe from its corruption.

The Edinburgh Dead is a powerful fusion of gothic horror, history, and the fantastical.