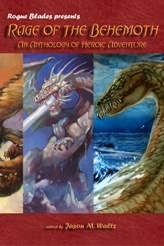 Heroic fantasy anthologies are a rare sight these dates.  And those willing to to take a gamble on emerging authors – virtually non-existant.

But don’t tell that to Jason M. Waltz, publisher of Rogue Blades Entertainment, and editor of Return of the Sword (2008) and the brand spanking new Rage of the Behemoth: An Anthology of Heroic Adventure.

Described as “Almost 150,000 words of monstrous mayhem recording the ferocious battles that rage between gargantuan creatures of myth and legend, and the warriors and wizards who wage war against, beside, and astride them,” RotB gathers 21 splendid tales of pure adventure fantasy under one cover, including contributions from Black Gate‘s Bill Ward, Andrew Offutt & Richard K. Lyon, Lois Tilton, Mary Rosenblum, Sean T. M. Stiennon, Brian Ruckley, Bruce Durham, Jason Thummel, and many more.

Here’s what I said in my introduction, in part:

While I enjoy a great deal of the novels and short stories that come into my hands, I frequently find they’re missing something. They’re missing the creativity, the delicious tension, the high-voltage drama that turned me on to reading in my youth. Specifically, they’re missing monsters.

Jason Waltz understands this. It took Jason to realize what the literature of Western Civilization has recently been lacking, and do something about it. In Rage of the Behemoth, his second anthology and the follow up to last year’s Return of the Sword, he’s picked a theme near and dear to my heart: monsters.

And not just any monsters – behemoths, the tippy-top of the fantasy food chain.

As Theo commented in his recent review right here at Black Gate:

One of the more consistent anthologies I have had the good fortune to read… Rage of the Behemoth is an intriguing glimpse into a multitude of savage worlds. The anthology is a throwback to the glory days of Burroughs and Howard, with an icy, ominous edge.

Rage of the Behemoth is available at Amazon.com or directly from Rogue Blades Entertainment for $16.99, plus shipping. Do your part to support short fiction markets for adventure fantasy – and get a terrific anthology in the bargain.

Thank you for the plug, John! I was thrilled when you agreed to pen the intro – I think between you and Mark Finn that nothing more could or need be said about Sword & Sorcery and grand adventure storytelling. Both pieces are a wonderful complement to the anthology.

Besides the professional names already listed, readers of Black Gate and last year’s Return of the Sword will be familiar with a few of the other names gathered here. Between them and the awesome cover art from Didier Normand and Johnney Perkins, no fan of pulp action sword-slinging can go wrong!

Just got my copies yesterday. Jason has produced a fantastic book and one that I haven’t put down since I first picked it up.

[…] story “Beyond the Reach of His Gods,” in Jason Waltz’s groundbreaking anthology Rage of the Behemoth. Since then, he’s proved that wasn’t a fluke with The Godless World trilogy […]