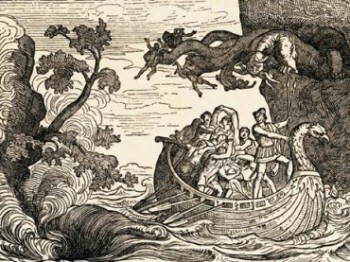 After Odysseus makes his way past the Sirens, he has to thread his way through twin threats on his way home: Scylla and Charybdis. Like many of the threats the Ithacan king faces, these have become proverbial: to be caught between Scylla and Charybdis is to be forced to choose between two terrible options.

And terrible they are. Scylla is a many-headed creature who snaps up sailors as they pass by. Charybdis is an unseen monster who lives under the sea, gulping down water and devouring ships like an aquatic Sarlacc. And if these weren’t individually terrifying enough, they are placed on opposites sides of a narrow strait, so that Odysseus must choose between them. Sailing far enough from Scylla to avoid getting chomped means getting sucked down into Charybdis’ maw, and vice versa.

(And does anyone at this point notice that an overwhelming number of Odysseus’ problems involve him being in terror of being sucked down, eaten, conquered or otherwise waylaid by women? UNLESS HE TERRIFIES THEM WITH HIS GIANT… UH… SWORD? I mean seriously. I really don’t give much weight to Freudian analysis the vast majority of the time but sometimes? You say one thing and you obviously mean your mother.) 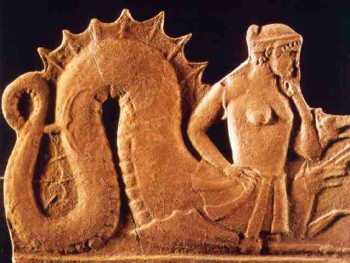 Scylla isn’t well described here in Homer, but she’s usually portrayed  as being a woman from the waist up but with a monstrous lower half (see what I’m saying?) composed of snake parts, howling dogs’ heads, and the tail of a cat. Sometimes she’s part woman and part sea-serpent, and sometimes she’s entirely monster. There’s also disagreement over how she got to be that way. Some versions have her transformed by Circe as the result of a love triangle with a god named Glaucus. Some have her poisoned by the wife of Poseidon. But wherever she came from, she remained a part of sea-going mythology for centuries.

Charybdis is a far murkier figure. We don’t get an origin for her, nor do we have any sense of what kind of monster she is, other than that she can suck down huge portions of the ocean in one swallow. Maybe because of this, even in ancient times Charybdis was rationalized as a whirlpool. There is one, in fact, at roughly the location that Homer describes – in the straits of Messina. 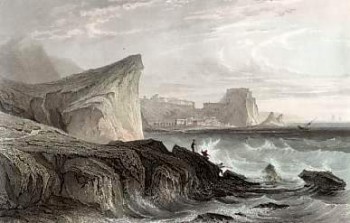 But doing so misses the point. Sure, Charybdis may have been inspired by an actual navigational hazard, just as a centaur may have been inspired by the unexpected sight of a man on horseback. But when we rationalize myth, (for that matter, when we systematize it, damn you Joseph Campbell), we miss a great portion of the point. Myths are more than their factual basis: they’re important for what they tell us about ourselves and how we see the world around us.

After all, if you want facts, why not turn to the encyclopedia?