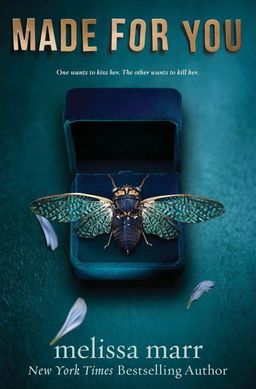 Eva Tilling has everything one needs to be the town darling in small-town Jessup, North Carolina: one grandfather is a prominent minister, the other owns a well-known winery, and she has learned the nuances of Southern etiquette. She also has a secret admirer who shows her how much she loves her by running her over with a car.

Eva wakes up in the hospital with more than just broken bones and stitches: she has a new ability to see someone’s death when they touch her. She finds the new ability confusing, but when she touches her friends and discovers they die horrible deaths — and soon — it frightens her. Once people in her social circle start dying, she knows she needs to tell her two best friends her secret so they can use her ability to save their lives and find the killer.

Made for You is Melissa Marr’s (best-selling author of the Wicked Lovely series) attempt at the mystery/thriller genre, and she succeeds. She uses first-person/present-tense to bring immediacy to the story and three points of view to ramp up the tension. Marr definitely tips her hat to classic who-dun-it novels by weaving in just enough details to keep me reading.

As for the characters, I found all of them believable and well-rounded. The author doesn’t shy away from teenage activities (specifically, sex and drinking). The parents are present throughout the second half of the book; Eva’s mother specifically has a relevant back story that adds depth to their relationship.

Eva and Nate (a former-best-friend-turned-longtime-crush) begin dating near the middle of the book. The portrayal of this relationship is well-done. Sometimes a romantic subplot can threaten to overtake the actual plot, and Marr does a good job of keeping the romance on the back burner while maintaining its importance. The villian’s POV is creepy and stalkery and hits just the right notes of delusion and depravity.

I found the prose complexly simple. The author’s style is reminiscent of Dean Koontz, which I liked a great deal. The author has clearly practiced the art of saying a lot with few words. This was the case throughout the book, but I found it to be most striking when Eva discusses how life works for people in prominent Southern families.

I do have a few quibbles. While the second half of the book rocks and rolls and basically plays a game of chicken with the reader, the pacing is quite slow in the first half. Eva spends a lot of time in the hospital remembering (or maybe mourning) her old life and making tentative discoveries about her ability. She thinks about the scars on her face and rekindles a relationship with a former best friend.

Is it realistic? Sure. Anyone who has a suffered an accident that includes a traumatic brain injury would spend several days or weeks in the hospital. However, for the first half of the book, not much happens.

Another aspect that keeps bothering me: when Eva touches one of her friends (CeCe), Eva doesn’t see CeCe’s death at all. By this point in the story, it’s been established that once Eva sees someone’s death, she doesn’t see it again until circumstances in the present day change it. Eva touches CeCe during a small get-together that Eva has devised so she can touch all of her friends in an attempt to keep them safe. Plot-wise, the timing of this party is just before the Big Reveal of the Killer, and so it stands to reason that Marr would use the opportunity to throw around a few red herrings. Eva never addresses the anomaly again, and once I finished the book I felt a bit cheated.

However, these quibbles are minor, and overall I thoroughly enjoyed the book. I’d recommend it for any fan of paranormal thrillers.