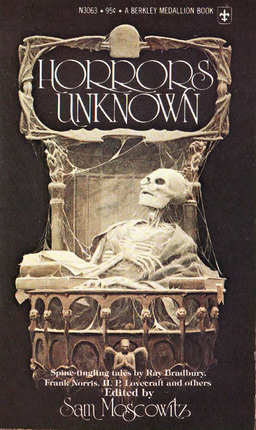 I think of Sam Moskowitz primarily as an SF historian, perhaps the greatest the field has ever known.

His book The Immortal Storm, a history of early fannish feuds, is still read and discussed today, and his numerous biographical articles on 20th Century SF writers — published in an assortment of SF digests in the 50s and 60s — were eventually collected into two popular books, Explorers of the Infinite and Seekers of Tomorrow. He was a tireless advocate for SF, and was famously the chairman of the first World Science Fiction Convention in New York City in 1939 at just nineteen years of age. He was so strongly associated with early pulp SF, primarily as a collector and genre evangelist, that Isaac Asimov dedicated Before the Golden Age to him.

But Moskowitz was also an editor of no little note, with some two dozen titles to his name. I recently stumbled on one of his first horror anthologies, Horrors Unknown (1971), which collects early 20th Century short fiction from Edison Marshall, Fitz-James O’Brien, Ray Bradbury, and many others — including a Jules de Grandin novelette by Seabury Quinn, a Northwest Smith novelette from C. L. Moore, and an incredible round-robin Cthulhu Mythos tales by none other than H. P. Lovecraft, C. L. Moore, A. Merritt, Robert E. Howard, and Frank Belknap Long.

Two more horror anthologies followed this one: Horrors in Hiding (1973; edited with Alden H. Norton) and Horrors Unseen (1974). The latter was his final anthology. Sam Moskowitz died in 1997, at the age of 76.

Sam wrote fascinating and detailed introductions — author appreciations, really — for each story, and his love and knowledge of the field shine through in every one.

The publishing industry has changed a lot since Horrors Unknown appeared, and mostly for the better. One thing I miss? Top-notch anthologies of classic pulp horror used to be available in supermarkets and bookstores for under a buck. Today, this would have to be a small press undertaking (if it could be published at all), and its primary market would be collectors… not fresh-faced kids staring in wonder at the cover, and rooting through their pockets for spare change.

Horrors Unknown was originally published by Walker & Co. in 1971, and reprinted in paperback by Berkley in 1976. It is 210 pages, priced at $0.95 in paperback. There is no current edition and it has been out of print for nearly 40 years.

The hardcover edition of Horrors Unknown appeared about the same time that I began to participate in amateur press associations (apas), a feature of the fannish world in which participants wrote (and drew, sometimes) their own “magazines,” typically on ditto (like me) or mimeo, for circulation among a small membership of 25 or so. I remember that I reviewed Horrors Unknown, not finding it all that good, though I liked “Grettir.” It wasn’t long before I began to read Icelandic sagas, including Grettir’s Saga as published by the University of Toronto — that saga being the source of Norris’s story. Perhaps I’ll dig up that review and take a closer look at what I said.

APAs! Ah, I have fond memories of the handful of small press magazines I was part of as a fan in Ottawa in the 70s and 80s. I think the publishing impulse runs strong through the fannish community, and it’s resulted in a lot of amazingly creative products with an astonishingly small print run.

In a very real sense, Black Gate is just a modern APA (without the ditto machine). Certainly it was my experience with them that made me think I could launch something like Black Gate (and the SF Site before that.)

Boy, go out of town for a long weekend with limited internet access, and look what I miss.

This was one of my favorite anthologies in high school. One of my best yardsale finds ever.

I took an in depth look at “The Challenge From Beyond” on my blog last year.
http://adventuresfantastic.com/famous-fantasy-writers-in-a-five-way/

[…] per book. I previously covered Night Fear by Frank Belknap Long, the Sam Moskowitz anthology Horrors Unknown, and Carl Jacobi’s Revelations in Black from the same […]