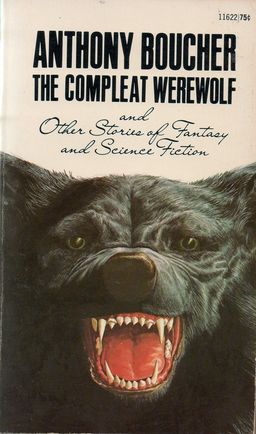 I like classic werewolf tales, in much the same way I like old-fashioned vampire stories. Tales of spooky nights, full moons, and ancient family curses are both frightening and warmly familiar.

Along with J. Francis McComas, Anthony Boucher was the the founding editor of The Magazine of Fantasy & Science Fiction; he edited the magazine from 1949 to 1958, winning the Hugo Award twice for his efforts. He was equally acclaimed for his mystery novels, including Nine Times Nine (1940) and Rocket to the Morgue (1942), which featured thinly-disguised versions of Robert A. Heinlein, L. Ron Hubbard, Julius Schwartz, Henry Kuttner, Jack Williamson, Edmond Hamilton and John W. Campbell. He died in 1968. His 1969 collection The Compleat Werewolf is a delightful gathering of SF and fantasy tales originally published in the pulp magazines Unknown Worlds, Adventure, Astounding Science-Fiction, Weird Tales, and Thrilling Wonder Stories. Here’s the book description.

Anthony Boucher was long known as an important book critic and editor, master of languages and successful novelist. He was also a superb short story writer of science fiction and fantasy: inventive, prolific- and always entertaining.

The stories and novelettes in this titanic collection were chosen for the sheer virtuosity of their themes, moods, backgrounds; for their insights; for their laughter. They are wonderfully peopled by moth-eaten little demons, grim interplanetary predators, rebellious androids and dopplegangers; by humans with otherworld talents; and finally, not least, by one very special werewolf.

The Compleat Werewolf is a memorable volume, representing as it does a rich display of a fine author’s creativeness and craftsmanship.

I stumbled across the book as part of a small collection of vintage paperbacks on eBay, selling for $25, or about $2.30 per book. I previously covered Night Fear by Frank Belknap Long, the Sam Moskowitz anthology Horrors Unknown, and Carl Jacobi’s Revelations in Black from the same set.

The Compleat Werewolf originally appeared in hardcover from Simon & Schuster in 1969, and was reprinted in paperback by Ace Books the same year. It was reprinted in the US by Carroll & Graf in 1990. The Ace Books version (pictured) is 252 pages, with a cover price of 75 cents.

Anthony Boucher was truly a giant in the mystery field. He should be better known today (though having Bouchercon named after him is a pretty visible memoriam!).

I reprinted Boucher’s introduction to the Reminiscences of Solar Pons on page 12 of a Gazette. And it was followed by William Nolan’s (author of Logan’s Run) excellent piece, ‘Who Was Anthony Boucher?” Both are well worth reading.

This is an excellent collection.

And it would still be excellent if every page was blank except those with the text of They Bite, which for my money is one of the best horror stories to come out of the pulps.

Have you read it, John?

I’ve always been more of a werewolf person when it comes to horror. I’ll have to check this out.

I was lucky enough to read a number of Boucher-edited issues of F&SF in the ’50s, and I always enjoyed his reviews in them. Later on, in grad school, I read all his reviews of crime novels in the NYT Book Review, going through the back issues in the library stacks. I have this collection of stories and a couple of his novels. He should indeed be much better remembered today, as Bob Bryne suggests, and while the Bouchercon is quite an honor, I’m afraid that many of the people who attend have no real idea of who Boucher was or what his accomplishments were.

I haven’t. Come to think of it I haven’t read any book where a werewolf is part of the main story.

They always seem to be a support role in modern fantasy.

Along with F. Paul Wilson, Robert R. McCammon is the only horror author I read (it’s just not my genre).

Several years later, there was a collection of linked short stories that formed a sequel.

NESFA Press came out with “The Compleat Boucher” some years ago. It has the 10 stories from “The Compleat Werewolf” plus 36 more stories. All of his sf and fantasy.
People need to read his stuff. He was one of the true greats.

This is one of my all time favourite collections! So great to see it egttign some love. I loved it so much that I actually registered just to make this comment. lol

It’s a great mix of quality comedic writing to some really dark stuff (I agree with the commenter who singled out “They Bite).

Thanks, bobbu_5150–I wasn’t aware of that collection, but I will be seeking it out now.

> He should be better known today (though having Bouchercon named after him is a pretty visible memoriam!).

Believe it or not, I forgot all about Bouchercon. I should have mentioned that as part of his bio! Thanks for covering for me. 🙂

> They Bite, which for my money is one of the best horror stories to come out of the pulps.
> It’s that Rare Thing–a wonderfully creepy, thoughtful, dead serious Monster Story.
> Have you read it, John?

> while the Bouchercon is quite an honor, I’m afraid that many of the people who
> attend have no real idea of who Boucher was or what his accomplishments were.

As I was putting together my notes for this article, I was disappointed to find how little of Boucher’s work was still in print.

Probably my favorite work of his was his fabulous 1959 two volume anthology A Treasury of Great Science Fiction. What a feast those two books were I first found them in the mid-70s.

Hmmm.. come to thing of it. I should probably feature McCammon in a VINTAGE TREASURE post or two.

I think I discovered him with THEY THIRST, but BOY’S LIFE is still my favorite.

> NESFA Press came out with “The Compleat Boucher” some years ago. It has the 10
> stories from “The Compleat Werewolf” plus 36 more stories. All of his sf and fantasy.

Another great book I overlooked, and that I should have mentioned above. Thanks for the assist. 🙂

> This is one of my all time favourite collections! So great to see it [getting] some
> love. I loved it so much that I actually registered just to make this comment. lol

Welcome, David! All those who love vintage fantasy paperbacks are welcome here. 🙂

I read this book as a teenager and loved it. If Boucher had only written as story that told what actually happened that time in Darjeeling…

>I think I discovered him with THEY THIRST, but BOY’S LIFE is still my favorite.

A part of the introduction to BOY’S LIFE remains the single best piece of writing I’ve ever come across. It’s one of my five top favorite books.

Somewhere along the line I plan a post on McCammon, including discussion of why he simply quit writing horror.

A fantastic author: Usher’s Passing, Baal, Bethany’s Sin, Swan Song (every bit the equal of King’s The Stand), Mine: guy is great. Even what I’d consider his lesser stuff, like The Night Boat, is still a really good read.

The opening lines to Gone South may be unequaled.

Boucher comes up again in Monday’s Public Life of Sherlock Holmes post in his role as editor of ‘Fantasy & Science Fiction.’

I don’t know what that means. Is that something Boucher mentioned in the hardcover?

> A part of the introduction to BOY’S LIFE remains the single best piece of writing I’ve ever come across.

The part where Cory Mackenson’s young friend says his father will go out and come back changed, you mean? Yeah, that was pretty chilling, indeed. I always wanted to reprint that section as an excerpt in BLACK GATE.

> Boucher comes up again in Monday’s Public Life of Sherlock Holmes post in his role as editor of ‘Fantasy & Science Fiction.’

Excellent! Looking forward to it.

[…] last week, John O’Neill wrote a post about Anthony Boucher. As he mentioned, Boucher, along with J. Francis McComas, was the founder of […]

After you go so far away from it, though, you can’t really get it back. You can have seconds of it. Just seconds of knowing and remembering. When people get weepy at movies, it’s because in that dark theater the golden pool of magic is touched, just briefly. Then they come out into the hard sun of logic and reason again and it dries up, and they’re left feeling a little heartsad and not knowing why. When a song stirs a memory, when motes of dust turning in a shaft of light takes your attention from the world, when you listen to a train passing on a track at night in the distance and wonder where it might be going, you step beyond who you are and where you are. For the briefest of instants, you have stepped into the magic realm.

John, there’s a character in the title story named Ozymandias who keeps making a reference to “that time in Darjeeling”. Every time he starts to tell the story of what happened in Darjeeling, he gets interrupted. We never do hear the tale.

Bob — Wow. Thanks so much for entering in all that text. And you’re right… it is a magical bit of writing.

Keith — Ah, that makes sense. Thanks!

[…] Fear by Frank Belknap Long, Carl Jacobi’s Revelations in Black, and Anthony Boucher’s The Compleat Werewolf, from the same […]